Whodunit? You Decide in Maltz’s The Mystery of Edwin Drood

Posted on December 1, 2019 by Bill Hirschman 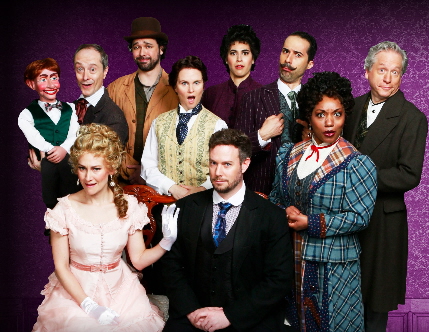 Have you ever watched a play and complained, “That’s not how it should end!” Or even better, “I could end it better than that!”

Here’s your chance. You – along with everyone else in the audience—gets to choose this month among 54 possible endings in the Maltz Jupiter Theatre’s revival of the charming 1985 murder musical The Mystery of Edwin Drood.

The audience will vote each night who is the murderer and who the happy pair of lovers will be when the curtain falls on the set of an English music hall and a troupe of 19th Century players.

That means that Maltz artists must rehearse, theoretically, every permutation possible because outcome could change every night.

“This is not a trick. The vote is actually going to happen and those on stage don’t know what you’re going to choose,” said actor Richard B. Watson in his genuine lilting British accent.

The uncertainty of the ending is rooted in Charles Dickens’ 1870 novel that he left unfinished with no denouement or solution provided. Rupert Holmes, best known then as a pop songwriter and performer (Escape: The Pina Colada Song), was approached by Public Theater icon Joseph Papp to musicalize the work. Holmes, who was born in England and saw many classic pantos there, was easily hooked. It helped that he was always fascinated by mystery novels (and would later his own as well as the TV series Remember WENN). Holmes wrote the book, the music, the lyrics and orchestrations. The original production won five Tony Awards and was revived on Broadway in 2012.

Setting the story as a production in a Victorian music hall by a close-knit troupe of players who welcome the entering audience, he created each solution requiring its  own solo song and the idea of audience participation. He established individual characters for the Victorian actors and the roles they would play. Echoing the devices of the period, the supervising emcee is a cheery “chairman” and the character of Edwin Drood himself is played by a woman.

The Maltz production has opted for an authorized chamber version — 90-minutes one-act with 11 actors compared to the original that ran 2 ½ hours with 20 performers.

“It basically keeps all those elements but it streamlines the amount of characters and the action…. I think it’s easier for the audience to keep up with and for the audience to more deeply hook into the character. And the action just clips along very quick” said director Jennifer Werner. “So it stays faithful to basic outlines of the script.” But that means “all of our actors have to do a lot more heavy lifting.”

But it does amp up the pressure. “So, we have our stage personas and then we have our characters. And we’re dancing and singing and we’re moving more set pieces and we’re changing clothes and…,” he said.

To capture the unrestrained feel of the music hall, Werner is having the actors performing some of those “special skills” that actors pepper their resumes with.

“Hi, Jesse, it says here you juggle. You’ll be juggling,” Werner said with a laugh. “Oh, it says you play piano. How wonderful. Would you like to learn accordion?”

Among its strengths is Holmes’ period–sounding score of rousing upbeat chorus numbers and beautiful ballads. Autumn Hurlburt, who plays the title character, said it is as challenging for an actor as it is lovely. “It is such satisfying music to listen to. It’s so beautiful and compelling. It’s limitless! But to actually learn it and train your ear, it never goes where you think it’s going to go…. You want to do it exact justice.”

The production has cast a combination of local and out-of-state talents, including several who have performed at the Maltz and in Florida before. Werner choreographed the Maltz’s surreal The Wiz and the scathing Cabaret. Hurlburt was in the Maltz’s Beehive.  Watson was in Anything Goes at the Maltz and in The Disputation years ago at the Coconut Grove Playhouse with Theodore Bikel. A nine-member orchestra will also be on stage led by musical director Caryl Fantel.

The plan is for the audience to just have good time, Watson said.

“It’s not it’s not stuffy theater… Music hall (theater) was for the working people. You can kick back, have a good time. (The chairman says to the audience) you can be as vulgar and uncivilized as is legally possible. Kick off your boots, loosen your corsets and enjoy yourselves…. He invites them to have drinks and to relax and to let your belly hang out.”

One Response to Whodunit? You Decide in Maltz’s The Mystery of Edwin Drood