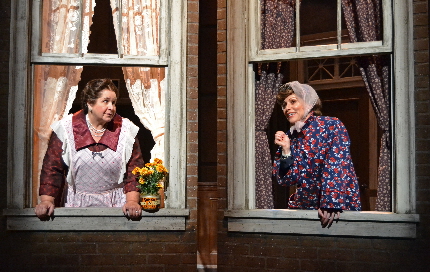 Awe is not a quality you usually hear in the voices of theater pros when they describe the central character in a work they are producing.

But that is the clear sense listening to director William Hayes, playwright Joseph McDonough and actress Elizabeth Dimon talking about Gertrude Berg, the heroine of their world premiere this month, Ordinary Americans at Palm Beach Dramaworks.

All three have become obsessed with telling the story of the radio-television pioneer of the post-World War II era, best known to post-Boomers as the friendly big-hearted maternal Molly Goldberg leaning out of her window in a Bronx tenement chatting with the audience like neighbors in a phenomenally successful sit-com.

But their admiration is based in both the real-life accomplishments of a woman in a man’s world and, ultimately, her courageous opposition to the ravages of the McCarthy Era during the Red Scare.

Berg was the creator, producer, writer and star of The Goldbergs, a radio then television series and even a Broadway play performed under various titles and forms from 1929 to 1955.

“She was this powerhouse,” enthused McDonough before a rehearsal. “She owned her own show, produced every show, wrote every episode. She was this media titan way ahead of her time and she’s been largely forgotten today, at least in our larger culture.”

Dimon chimed in, “I think she became such a prolific writer partially because she was very bright. She was educated and her husband was a huge supporter of her and said, ‘You know your mind is good and you need to do something with it.’ ”

Her Molly Goldberg was almost a caricature but also a reassuring recognizable and definitively Jewish hausfrau along with her immigrant family, a ground-breaking series when there were few such examples in broadcast fare.

The networks thought they were taking a risk by offering such people as the center of a series, but in fact they were putting on radio and television the very lives of some of the people listening and watching.

Making them everyday people was a masterstroke. “She had the brilliance of talking out the window (to the audience) like FDR and his fireside chats. She talked out the window and said, ‘Not only are we like you, you’re my friend and you’re going to trust me,” McDonough said.

Berg herself, was far different than Molly, providing a double challenge for Dimon to portray. McDonough said, “Molly Goldberg was this homemaker who always cried in the kitchen and Gertrude Berg hadn’t cooked a meal in 20 years.” Hayes added, “She lived the high life in New York.”

But at the series’ height of popularity – second in the ratings to Milton Berle at the struggling CBS – the show ran afoul of McCarthyism. Co-star Philip Loeb as Molly’s husband was named in the blacklisting Red Channels report. After only three complaints from the public, CBS’ execs and sponsors insisted Loeb be fired as a condition of the show returning to air, despite Berg’s protests. Loeb resigned rather than cause Berg trouble. But she fought all of it bitterly.

She was actually a bit surprised at her failure to prevail. Dimon said, “I’m sure she never thought this would come.… I mean she was just busy making her living and doing her show.”

The playwright said, “She went 30 years without having a boss. She was her own.  And I think she came into this from a position of strength where she’d been she’d been surviving in a man’s world for 30 years. And she took gruff from nobody.”

Hayes agreed, “She made the mistake of thinking she was untouchable…. She thought she was indestructible.”

The germ of the play came from Dimon, a revered South Florida actress with multiple awards recognizing her range from drama to comedy to musicals like Dramaworks’ Spitfire Grill last season.

“I think really my fascination first started with the blacklist and the McCarthy era… how someone would get so hooked on something… in this very horrible way,” Dimon said. Then she ran across Berg’s involvement and that of Loeb whose work as an activist for Actors Equity led to actors being paid for rehearsals.

She mentioned this to Hayes, who has been developing as well as performing new work as part of his dream of Dramaworks being recognized nationally as a major regional theater.

Hayes recalled with a rueful smile, “I knew nothing about Gertrude Berg.” But he began research online including viewing a 2009 documentary Yoo-Hoo, Mrs. Goldberg, whose title echoed her series’ catchphrase out the window. “I was hooked.”

So much so that he tried and failed to get a grant. But when “I couldn’t get the idea out of my head… I decided to commission the play.”  He pitched the idea to some playwrights, but then thought about how satisfying his work has been with McDonough, who had developed Edgar and Emily for Dramaworks in 2018, a fantasy meeting between Emily Dickinson and Edgar Allan Poe.

They met at a noisy sports bar on Clematis Street to discuss it. McDonough, who had no knowledge of Berg, went home to do online research and reported back that he couldn’t find anything about “Gertrude Bird.” But when he began the research into Berg, McDonough soon joined the corps of the obsessed.

The work began as an admiring biography, but as the writer collaborated with Hayes doubling as a dramaturg, it became clear that while the narrative had an inspiring ending, the arc of the play had to be aimed at the tragedy leveraged by the McCarthy Era.

The company provided a patient and protracted development process, McDonough said. “Bill and Dramaworks devoted time and resources, everything I’ve needed to help develop this play. I’ve probably been down here over 2 ½ years seven or eight times where I’ve had readings and workshops and Beth has always been available and part of that process.… I’ve had the luxury of being able to develop and shape this play without pressure…having the time that it just takes to do that.”

That included one four-day period this summer in which Hayes and McDonough shut themselves up in a room, discussing every scene and acting out every line.

A key has been the opportunity from the very beginning to work with Dimon. “It was very, very helpful to me to know I was not just writing Gertrude Berg but I was writing for Beth,” McDonough said.

Dimon, who has a passing resemblance to Berg, loved being integrally involved from the beginning. “I like being part of the collaboration of it and having an input. I could say my opinion with Bill.”

She paused, “It’s funny. I do not find myself to be very assertive sort of person outside of a rehearsal space, but I become very assertive in this [process].… Because the rest of the world I don’t know very much about it, but here I feel like this I know this especially because this was a character that I’ve loved and have researched so much.”

Dimon has often been involved with world premieres. “I know this process of putting my stamp on something… . I’m proud to say that my name is in a lot of new scripts” when they’re published. “I’m proud of that because I remember coming up as a girl you’d see people’s names, you know, ‘originally done by’ you’d think ‘Wow, who’s that?’ ”

The script she performed in readings has evolved, even in rehearsals for the production, which she likened to playing the ever-changing situations in Tetris.

McDonough said, “I have such admiration for you actors on a new play because… we’re asking you to roller skate on ice, because you feel now the ground is always slipping beneath you.”

While the team is working not to hammer the audience with it, they acknowledge the play has resonances “as a cautionary tale,” the playwright said.

“I tried to be faithful to telling our story with these people from this time period. But within that time period there is a lot of fear and paranoia, political division and negative impulses that were hurting good people.”

Dimon, whose interest in the blacklist was the initial source of the project, said, “I always believed that what you do not examine, you are bound to repeat… You can look at behavior today through the lens of something else.”

Ordinary Americans plays Dec. 6 –Jan. 5 at Palm Beach Dramaworks, 201 Clematis St., West Palm Beach. Performances are 7:30 Wednesday-Thursday and some Sundays, 8 p.m. Friday-Saturday, 2 p.m. Wednesday, Saturday and Sunday and Dec. 26. Regular individual tickets $77, student tickets $15, and Pay Your Age tickets are available for those 18-40. Call 561-514-4042 or visit palmbeachdramaworks.org. The work will move with most of the cast to GableStage in mid-January.