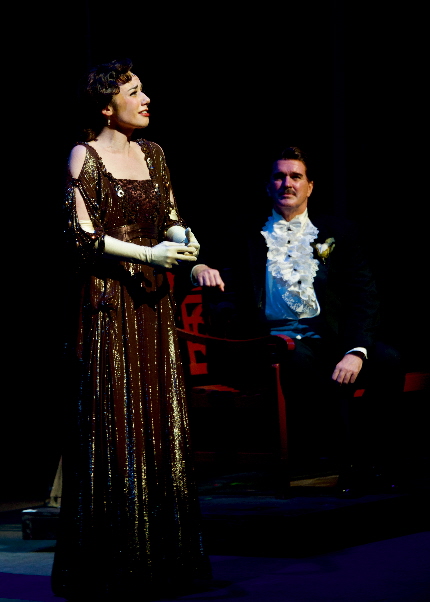 Few theatrical challenges are as daunting as an actor taking on an iconic role in an iconic musical made unforgettable by an inimitable talent in a career-making performance indelibly engraved in the popular consciousness.

But actress Stephanie Maloney with the aid of director Dom Ruggiero and musical director Dominic Raffa has surmounted that peak in her unassailably solid and personalized incarnation of Fanny Brice in The Wick Theatre’s Funny Girl.

The first half of the secret to success is to ignore previous productions, much as Marcia Milgrom Dodge does for classic warhorses at the Maltz Jupiter Theatre. So if you’re looking for an impersonation of you-know-who or her film version of the original stage musical, you will be disappointed. There is knowingly and intentionally not a wisp in sight.

The second half of the secret that Maloney triumphs at is pulling the character out of her own soul so that this becomes her Fanny Brice with her own idiosyncrasies and inflections. It’s still that endearing awkward fish-out-of-water Fanny so brilliantly crafted by composer Jule Styne, lyricist Bob Merrill and bookwriter Isobel Lennart.

But Maloney smoothly melds uncensored insecurity and brash ambition to create a vulnerable yearning human being clad in the protective armor learned in the hardscrabble streets of New York. Maybe it’s the perfect New York accent that this Pittsburgh native has adopted, but there is an echo on several levels of the more middle-class but equally conflicted Mrs. Maisel.

When Maloney launches into the classic “Don’t Rain On My Parade,” “The Music That Makes Me Dance” and “People,” they become hers, emanating from her gut – as opposed to someone addicted to melisma and phrasing the composer never sanctioned (Styne reportedly never cottoned to the film version).  Sure, she has the required Broadway belt, but she exudes the meaning of the lyrics rather than “performs” what have become cabaret standards and audition pieces. Granted, Maloney does not have that magical God-given gift that makes someone a “star,” but she is as winning and moving as you could hope for.

If you’ve only seen the movie, remember this is a 1963 musical with all the classic Broadway tropes, such as comedy duets and production numbers that do nothing to advance the Brice narrative, as opposed to the film which laser focused on Brice’s biographical arc. So there’s a hilarious duet between Fanny’s mother and her mentor buddy “Who Taught Her Everything.” And the fine choreographer Laura Plyer gets to illustrate for the 21st Century audience what vaudeville productions numbers looked like (albeit on a smaller budget), which only feature Fanny as comic relief late in each piece.

The supporting cast is blessed with Angie Radosh as Fanny’s pragmatic loving mother and Courter Simmons as Fanny’s tap-dancing buddy, plus Steve Carroll as Ziegfield and Ellie Pattison as the busybody Mrs. Strakosh.

George Dvorsky, who just delivered a fine Daddy Warbucks on the same stage and a few years ago was a solid Cervantes/Don Quixote for the Wick, struggles for all but the last scenes to give us an engaging Nick Arnstein. He’s handsome enough and Dvorsky has a terrific voice, but this Arnstein is not especially engaging. And neither Lennart, Dvorsky or Ruggerio make his attraction to Fanny remotely plausible.

Yet, with the experience-honed talents of Ruggiero and Raffa (with a lush recorded score), the production rates as one of the Wick’s smoothest and strongest.