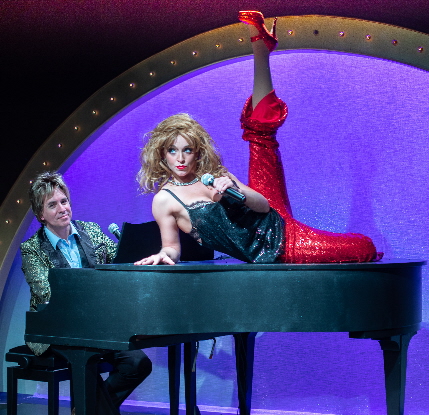 A voiceover introduces the opening of Bette & Barry: From Bathhouse to Broadway. “Island City Stage is proud to present Bette Midler and Barry Manilow.”

At the piano, ready to start the cabaret act, is Michael Ursua. He’s wearing appropriate concert attire: a red jacket, black pants, and sparkly black shoes. His hair, a wig, is perfectly coiffed, feathered in that Manilow trademarked look. Ursua begins to play the piano, but there’s no co-star. He plays again. Nothing.

From the back of the house, a frazzled, sunglass-wearing Mallory Newbro arrives. She explains why she’s late with a litany of excuses. Turns out, she tells us the real story: She was stuck in traffic on I-95. The local audience relates. Writer/director Michael Leeds builds in local references here and there.

There’s another about the back up singers: While three Harlettes, Bette’s famous “girls,” should be expected, there are only two (Sabrina Lynn Gore and Gaby Tortoledo). Fictional Donna Ventriglia is listed in the program, but she isn’t here. In the story, she didn’t show up because she got a gig that paid better at Century Village. Laughs again.

This is some of the set up for what was an imagining of what it would be like if Midler and Manilow decided to do a concert together. In real pop history, they never have. Yes, they played at the Continental Bathhouse in New York City early in both of their careers and Manilow produced Midler’s first two albums, including her uber famous 1972 “The Divine Miss M,” but they never performed in a dual concert after they both became greats. In fact, Midler recently said in a television interview, the two never spoke. (Truth be told, I am a Bette-head.)

So that’s the scene setter. We’re in a cabaret at Island City Stage to watch Bette Midler and Barry Manilow together at last. But, we are not to see impersonations of the pair. So, is Ursua supposed to be a Fanilow? It seems so when he and Newbro get into a “he said, she said” trivia match about who knows more about Bette or Barry. In rapid fire: What was Barry’s real name? Barry Alan Pincus. What was Bette’s? Bette Midler is her real name.

A couple of biographical history lessons show up, such as a segment of commercial jingles, “songs Barry wrote to pay the rent,” that Ursua conveys. There’s “Stri-Dex,” “Pepsi,” “Dr. Pepper,” and the-forever-ingrained-in-pop culture “Stuck on Band-Aid,”  “State Farm,” Like A Good Neighbor,” “Kentucky Fried Chicken, Grab a Bucket of Chicken,” and “McDonald’s, You Deserve a Break Today.” This one comes with a prize as Gore and Tortoledo hand out fast-food burgers, wrapped in McDonald’s famous yellow paper, to two people sitting in the front row.

There’s a gay joke before a girl group medley: “The Shangri Las were four tough girls from queens, but we are just in a room full of queens.”

Urusa, one of the best South Florida musical theater singers, performs the heck out of the Manilow songs, “Could It Be Magic,” “It’s A Miracle,” “Mandy.” And, yes, that’s really him playing the piano, both in his songs and when backing Newbro.

Newbro struts and shimmies as Bette, never doing an impersonation, but entirely tributing Miss M. When it comes time for her to get serious, she shows her singing range. Captivating. You can’t hear a pin drop in the room. Her rendition of “Do You Wanna Dance” should be available for download. Yes, it’s that good.

In one of the funnier exchanges, Ursua begs her not to tell Sophie Tucker jokes, one of Midler’s mainstays in all of her live shows, but she wins out. Newbro’s got the Midler “Soph” banter to a T, and she brings down the house with “Those Wonderful Sophie Tucker Jokes,” as Midler called them when she introduced the 1920s comedienne to the masses on her “Live at Last” album in 1977. (We don’t learn that from the show, but would others be interested?).

I found myself checking Google to find out when Midler sang the hit that I only remembered Karen Carpenter making famous, “Superstar.” That was from “The Divine Miss M.” Newbro nailed that one, too, by the way.

Hats  off, too, to choreographer Ben Solmor for his especially fast paced “Miss Otis Regrets,” and to Newbro, Gore and Tortoledo for making it look easy.

Midler has been quoted as saying that people have unrealistic expectations. That quote kept ringing in my head as I watched Bette & Barry: From Bathhouse to Broadway. The audience was enjoying the songfest, they liked the campy bits, and the cute costume changes (kudos to W. Emil White on the costumes, ditto for wigs by Bonnie Dubeck). They clapped and sang along with “Copacabana” (I had a difficult time enjoying it. The pre-recorded music track played and it distracted me. Sometimes a piano track was used to accompany Ursua when he sang a solo.)

So, why was I wanting more? Why did I need an explanation of who these two performers were and why Ursua was costumed like Manilow, but despite singing his songs didn’t really seem to have any other relationship to him. And where were the details about the pair’s rise to fame from the Continental Baths – from bathhouse. And to Broadway? There was a tip of the hat, or should we say headdress, to Midler’s latest stint in “Hello, Dolly.”
Loaded with talent and plenty of songs, Bette & Barry: From Bathhouse to Broadway is entertaining; it’s just lacking a story. 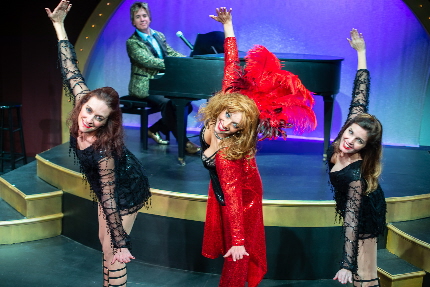 ith one 15-minute intermission. Tickets are $40.