Zoetic’s Sondheim: It Doesn’t Get Much Better Than This 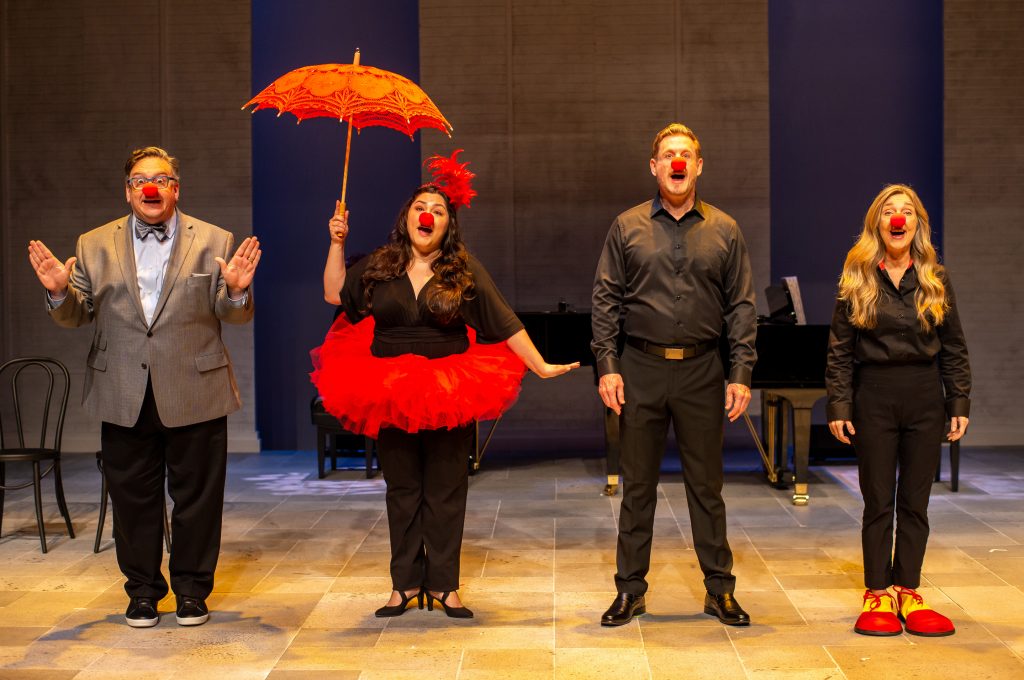 Comedy Tonight in Zoetic Stage’s Suide by Side by Sondheim with Stuart-Meltzer, Joline Mujica, Aloysius Gigl, and Jeni Hacker / Photosd by Justin Namon

Folks, it doesn’t get much better than this:

Some of the most skilled theater artists in the region delivering a gloriously funny and moving celebration of the work of the finest musical theater genius of the 20th and 21st Century in a do-not-miss-this production.

Zoetic Stage has enhanced and elevated the revue Side by Side by Sondheim with more emotional depth in its musical performances and more directorial/choreographic touches especially in its comedy than in any of the many other revues I’ve seen.

Granted up front: This critic is a notorious certified life-long Sondhead who sings his work in the car when no one can hear and who longs for a complete Sondheim trivia category he can run in Jeopardy. (Answer: Joshua. Question: What is Sondheim’s middle name?)

But the ecstatic rave that follows is far from a foregone conclusion. In fact, those of us who love the master’s canon actually put up a much higher standard to satisfy when someone mounts a Sondheim evening — especially when his work is taken out of context in a revue rather than a full production.

It helps, of course, that Zoetic and its artistic director Stuart Meltzer adore and revere his work, having already produced much of his catalog including a Carbonell-winning Sweeney Todd, a lush Sunday in the Park with George and a surprisingly satisfying production of the difficult Passion.

Indeed, Zoetic was in rehearsals for A Little Night Music when Covid-19 shut it down. When live theater resumed, the expense of the expansive show forced production off to another season and they opted for Side by Side.

Traditionally, with only three singing actors in formal dress, a primarily non-singing host/narrator, and solely two pianists, this procession of 28 songs and a medley incorporating snatches of 27 numbers has been a cost-savings staple of regional theaters since it bowed in London in 1976 and Broadway in 1977.

Frequently, it’s staged as a classic nice and easy revue with no narrative plot, no costumes, perhaps a few stools. But Zoetic, to quote Tina Turner, “don’t ever do nothin’ nice and easy.”

Driving this production is that this is clearly a work of love from a director, musical director and cast having what seems to be the time of their lives. The production has minimal but effective costume changes, props, projections and considerable light-hearted staging by Meltzer and choreographer Jeni Hacker from what is usually just done with the standard stand-and-deliver renditions in a revue.

But what separates this from the slew of Sondheim revues you may have seen or heard in recent years is the depth of complex emotions and surgical precision in delivery that makes this as much an investigation as celebration. Even with the added production values, the simplicity of the setting allows both Sondheim champions and those not as enamored to reassess his virtuosity and intelligence.

Because the material is limited to Sondheim’s pre-1976 work, Side by Side has been eclipsed in recent years by a slew of other revues covering his entire oeuvre. The last numbers here are from Follies from 1971 and A Little Night Music from 1973. No Sweeney, no Into the Woods, no Sunday.

But what is left is breathtaking. The show combines work by themes or commonalities such as Sondheim’s notoriously complex insights into relationships and marriage. Some of the songs here are his lyrics using music by early colleague/teachers such as Leonard Bernstein and Jule Styne. There are the classics, now standards; cut songs, songs most people have never heard of.

Which finally allows us to back into the most memorable facet: Jeni Hacker, Aloysius Gigl and Joline Mujica gifting us with exceptional performances whether infused with comic abandon or pain-suffused passion. Again, having heard many, perhaps most, of these songs recorded by dozens of songsters, several of these here rank as at least equal and sometimes surpassing the best recorded outside of a full performance of the entire musical.

These are actors who sing or singers who act. Like Sondheim, they use songs to tell stories. They navigate the melodies, harmonies, lyrics and underlying themes like explorers.

Gigl’s full expressive baritone doing two numbers usually done by women, the ineffably lovely “I Remember” from Evening Primrose and an incendiary “Could I Leave You” from Follies.

Mujica, who starred as Tracy in Actors Playhouse’s Hairspray in 2011, is younger than her colleagues, but that invests an interestingly different spin to some songs “Broadway Baby” and the painful ache of “Losing My Mind,”

And last but not least, arguably most unforgettable, Hacker reaffirms that she is one of the finest musical theater actresses we’ve seen. No asterisks. She dissects lyrics and music, finds the truth of them, and then redelivers them in unique ways. Here, she imbues bottomless regret at lost opportunities in the uber-standard “Send in the Clowns.” She would stop the show if that was still a tradition with her insanely well-enunciated tongue twisting “Getting Married Today.”

And Hacker’s “I’m Still Here” that laundry list number for an aging performer is better here, certainly more singular, than any rendition by Elaine Stritch or my favorite Carol Burnett. Or she can be raucously funny physically such as her 19th Century madam trying to be sexy while falling over a chair and a sofa in “I Never Do Anything Twice.”

We’ve said it before, but her work provides master classes in acting in a musical theater performance. Educators in half of the state would do well to have their students take a field trip to watch what she does.

As crucial as Meltzer’s overall vision is, a significant portion of the triumph belongs to musical director Caryl Fantel who has helped the vocalists mold their performances of what any actor will tell you is deceptively challenging music and lyrics that turns in on itself, changes time signatures and weaves vocal lines in and out of multiple characters. Note her tapestry weaving voices in “Pretty Lady,” the song of three lonely British sailors on leave in feudal Japan from Pacific Overtures. 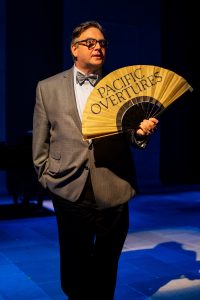 Meltzer smoothly does double duty by serving as the genial narrator providing context for some of the songs and inserting a good deal of wry, what may be, ad libs, sometimes making a few side remarks about Miami. His welcoming presence charms the audience and his joy grinning at his colleagues’ performances from a side chair is infectious. He even sings and dances a bit.

The four and the two pianists have a palpable chemistry, especially Hacker and Gigl who won Carbonells together as Mrs. Lovett and Sweeney Todd in Zoetic’s 2019 production and who connect here as the older lovers in the numbers from A Little Night Music.

When the performers dive into a duet like Mujica as Maria and Hacker as Anita in the soaring “I Have a Love” from West Side Story, they act off each other as actors do in a straight dramatic scene – visibly reacting facially and physically to what the other person is singing.

Additionally, Fantel and co-pianist Jeff Hess with their instruments interlocking provide a musical environment that sparkles and shimmers when need be, bubbles in the joyful numbers and invests an outside observer’s compassion in the yearning of the ballads.

As usual, Zoetic pulls from its stable of first-rate designers, crews and support staff, in this case the comical costumes of bits and piece by Marina Pareja, projections across an array of screens by Michael McKeever who also did the set, fluid lighting by Tony Galaska, crucially pristine balanced sound by Theodore Woolsey, everything overseen by resident stage manager, production manager and properties designer Vanessa McCloskey.

This production is a revue for people who don’t like revues. It’s for people who love Sondheim, but also for those who previously been puzzled by his appeal.

Sondheim died in November, leaving a huge abyss in many lives, but leaving behind a transformed sense of musical theater that can be hilarious and entertaining and poignant and thought-provoking all in the same piece.

Rest assured, that wherever Steve is right now, if he’s looking down on this Miami stage, he’d be proud of what has been wrought.

Side by Side by Sondheim from Zoetic Stage runs through April 10 in the Carnival Studio Theater at the Arsht Center’s Ziff Ballet Opera House, 1300 Biscayne Boulevard, Miami. Performances are at 7:30 p.m. Wednesday-Saturday, 3 p.m. Sunday. Running time 2 hours 20 minutes, including one intermission. Tickets are $60-$65. Call (305) 949-6722 or visit www.arshtcenter.org.

Covid protocol: Masks required in the lobby and auditorium. But proof of vaccination or recent testing is no longer required.  The totally non-paper ticketing means that tickets are sent by email or text to your phone (even if you get them from the box office) and that electronic ticket is what must be shown to the ticket scanners at the door; they cannot scan a paper printout. The program can only be accessed on your phone using a QR reader app, assuming you have a phone and a QR reader app – and they are hard to read on a phone to begin with. 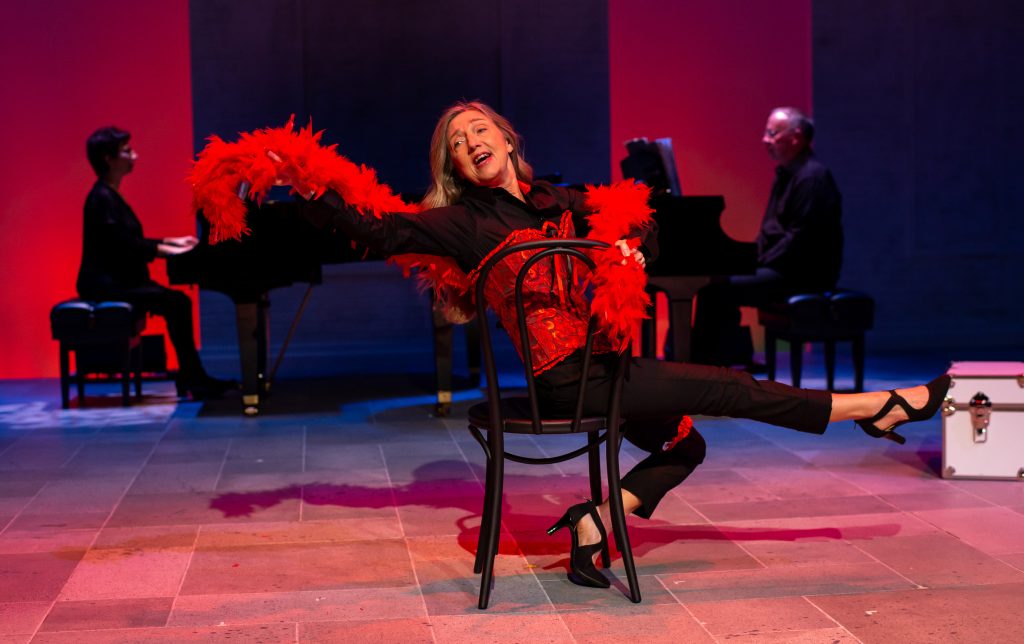