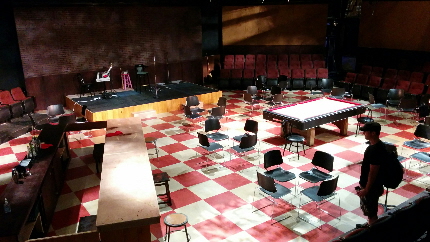 Champions of putting emotional distance between a production and the patrons might be a tad uncomfortable at Murder Ballad at Actors Playhouse. After all, a lovesick swain likely will pour his heart out while standing on a chair a few inches away from an audience member’s face. A ticket buyer may find herself within spitting distance of a sweaty couple making out on a pool table – or trying to kill each other.

“We’re not asking the audience to be a part of what’s happening,” Artistic Director David Arisco said with an enthusiastic laugh. But he is briefing his cast what to do when patrons fueled by pre-show drinks decide to get involved when the musical opens Oct. 10.

It’s “immersive theater.” Not interactive. No one will be talking to you or touching you. But this noirish musical about a violent love-and-lust triangle will take place in and around part of the audience. The rest of the audience will be a bit further away, but they will surround the action in an intimate arena.

How immersive? Actors Playhouse has ripped up some of its second floor balcony auditorium to reconfigure it. It will not be just a cockpit theater-in-the-round, but features tables and chairs cramming the main performing area like a nightclub.

To see a slideshow of the set design and construction, click here.

The in-your-face aesthetic and arresting pop/rock score are why Arisco is clearly jazzed about this off-beat 2012 musical that few Floridians have heard about and fewer have seen.

In an email, Arisco wrote, “THE MUSIC, it had me at hello, the fact that it is sung through, edgy, sexy; the immersive aspect, the challenge of reconfiguring a theatre space strictly for this piece.  If I sound excited, I am.”

The staging will be sensual and dark; the temperature in the house will feel a lot more steamy if Arisco gets the performances he hopes out of his quartet of actors. Blythe Gruda (locally Floyd Collins and Songs For A New World), Chris Crawford (locally Assassins and The Lion in Winter), Mark Sanders (next to normal) and Mariand Torres.

“There were three shows at the same time with murder in title (that season in New York): Murder For Two, A Gentleman’s Guide To Love and Murder, and this. I listened to the music for the first time and I felt I needed to fight for this piece.”

Arisco occasionally shoves at the comfort level of his audience, which prefers more traditional fare. He has mounted intelligent, thought-provoking productions that were acclaimed artistic successes, but which received decidedly mixed reactions from some of his patrons. Among them have been Violet about a disfigured young woman hoping a faith healer can cure her, the Jason Robert Brown song cycle Songs For A New World and the superb folk musical about a buried caver Floyd Collins.

But what will likely surprise frequent visitors to the Playhouse will be the physical set up in which the balcony theater was transformed during most of September into a neighborhood club/bar. Set designer/technical director Gene Seyffer and a crew ripped out the first three rows of the auditorium that sit actually a bit below the level of the stage. Then they extended the stage out over that area. That created a main playing area reaching deep into the auditorium.

That was easier said than done. The balcony theater was built three years after the old movie house was bought by the City of Coral Gables and Actors’ Playhouse named as its professional managing theater company in 1995. But Seyffer found that there are almost no 90 degree corners and the floor itself isn’t level. So installing wooden support trestles for the 30 sheets of plywood flooring took several days.

Then some seating sections were put on the right and left hand sides of that playing area. A bandstand was erected at the back of the stage, plus a pool table and a bar were installed in the playing area; much of the action will occur around and on top of those three elements. Finally, about 40 chairs with club tables will cover the playing area for Playhouse patrons. Oddly, enough, the 300-seat house will likely only lose about 50 seats in the new configuration.

In the end, there will be audience members not only surrounding the action on the sides of the arena but in the action itself. Actors may be declaring their love, having sex (clothed) and physically battling while standing on the pool table, even standing on the tables of the patrons.

Actors will sing to each other from different parts of the auditorium, meaning extra challenges for the sound and lighting team. “It’s more like a zone defense kind of lighting,” said designer Eric Nelson.

It will be a challenge for the actors. A patron might have their legs sticking out in a place where an actor had planned to pass by. Some audience members may try to engage the actors in mid-performance.

The serendipity that helped seal the decision to do the show this way was that the Playhouse was going to rip out seats anyway to lay in new carpet. But now everyone connected to the show is excited by the set up. Executive Producing Director Barbara Stein likes it so much that she has asked the staff to store it for future shows, Seyffer said; normally most sets are scrapped after a show closes.

Trying to create the sense of being in a Manhattan bar, the entire experience will be different than what the Playhouse’s mainstream audiences have come to expect. To start with, the four-piece band will play through a half-hour pre-show. Subscribers will be allowed in early to scout seats because there is no assigned seating. They can opt to be as close as the club tables or as far away as the top of the stadium risers. About 10 minutes later, the rest of the audience will be allowed in.

The bar that figures in the play itself will be selling three kinds of beer from the Miami Brewing Company plus red and white wine. Hard liquor will be sold in the lobby. That should put patrons in the mood.

One challenge being worked out in rehearsals is how to smoothly get the schmoozing, boozing audience in their seats and get the show started with a seamless transition, Arisco said.

Since 99 percent of the audience won’t be familiar with the piece, Arisco is concerned that people know the plot going in – even though it’s about as timeless a scenario as the Appalachian/ folk ballads that the title refers to.

Narrated by a singing bartender (Torres) in present-day New York City, the story follows Sara (Gruda), a downtown kind of girl deep into a volcanically sexual affair with Tom (Crawford). Their bond seems unshakeable as they sing out in an East Village bar. But two years later, they break up with a dry-eyed no-regrets departure.

Sara, who has banked her emotions, hooks up with a well-off uptown fella, Michael (Sanders), a kind-hearted academic with a seemingly even temper. They have a child and seem to settle down. But the frisson of Sara’s old life calls to her after five years.

She returns to the bar and takes up again the ill-fated relationship with Tom. It’s a not spoiler to say that someone is killed – but the show keeps people guessing who will be the murderer and who will be the victim.

Murder Ballad plays Oct. 10-Nov. 2 with previews Oct. 8 and 9 at the Actors’ Playhouse at the Miracle Theatre, 280 Miracle Mile, Coral Gables. Performances 8 p.m. Wednesday-Saturday, 3 p.m. Sunday except 2 p.m. Sunday the 15th. Running time 80 minutes, no intermission. Tickets for weeknights and matinees are $45, and on Friday and Saturday evenings $53. The theater offers a 10 percent senior discount rate the day of performance and $15 student rush tickets 15 minutes prior to curtain with identification.  Visit actorsplayhouse.org or call (305) 441-4181.

To see more photos of the reconstruction, click here

One Response to Actors Playhouse Rips Into Auditorium For Murder Ballad