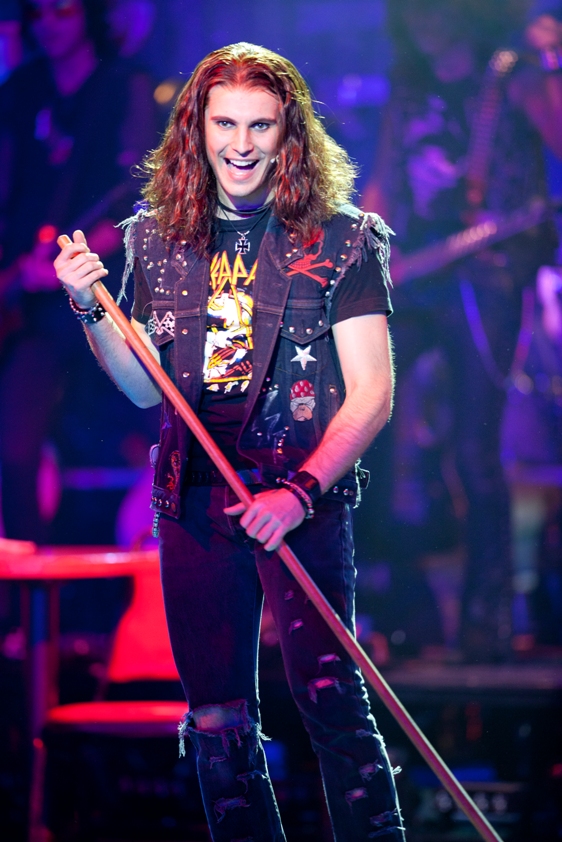 Miami native Dominique “Dom” Scott returns home at the head of the national tour of Rock of Ages at the Arsht Center this week. / Photo by Scott Suchman

Is there a better high for a theater artist than to return home starring in a national tour of a hit Broadway show? Ask Miami native Dominique “Dom” Scott.

When the Miami native takes the Arsht Center stage Tuesday to play the guitar hero in the spoofy musical Rock of Ages, it’ll be an artistic homecoming as well.

Wearing a wig of curly long locks and ripping out vocal notes at the top of his range, Scott gets to merge the two loves he honed while attending Miami schools including the New World School of the Arts: musical theater and rock music.

His devotion to his Miami roots frequently manifests itself in one of his favorite catchphrases — “That’s how we do it in Miami!”

“I look back on Miami with very loving eyes,” he said in a phone interview last week. “Definitely, the fact that I grew up in Miami is such a huge part of me and my development. You hear in it how I talk as a person, in my personality.”

His parents still live in Miami where his father works at the French consulate. He still has friends here although many he met in theater have moved out of state. Because one of his mailing addresses is still at his parents’ house (along with his dog), he even had jury duty in Miami last August.

In particular, Miami’s multi-ethnic mash-up seeped into his DNA. “Miami is a very diverse cultural hub and… I was exposed to a lot of different people and cultures, and ways of living and ways of thinking,” he said. At Carver Middle School he took several of his regular courses in French. “Many of my peers there were Haitian. Many of my neighbors were Hispanic… and I went to New World where it was all kinds of different people.”

He’s planning to dovetail this trip home with visits to local teachers and the few close friends still here. He’s concerned that being on the road for more than a year is tough on maintaining relationships that date back before he attended Syracuse University. “The hardest thing these days is keeping in touch,” he said before performing the show in Knoxville, Tenn.

Contacting one teacher won’t be hard. One of those New World teachers who coached him for auditions was director Stuart Meltzer, who just opened the play I Am My Own Wife a hundred yards down the hall in the Carnival Studio Theater in the Arsht.

While Scott has returned to Miami on occasion, he hasn’t performed here since graduating from New World in 2006, aside from a brief turn as an understudy and ensemble member in Actors Playhouse’s production of Miss Saigon.  His last starring role here was as Nathan Detroit at New World’s production of Guys and Dolls.

Now he has the lead in Rock of Ages, which opens the Broadway Across Miami season at the Adrienne Arsht Center for the Performing Arts with a five-day stand. The surprisingly funny and engaging Tony-nominated musical simultaneously celebrates and pokes fun at the glam-metal-rock of the ‘80s and all of its accoutrements from “big” hair to outlandish costumes.

The score is built around 28 opuses from the classic oeuvre of Whitesnake, Journey and REO Speedwagon, and ends with a paint-blistering greatest hits finale. It even has a droll eye-winking plot that posits a young songwriter Drew (played by Scott) who comes to the Sunset Strip in 1987 with dreams of rock mega-success. After two hours, he finds faux fame, disenchantment and, of course, true love after some chastening experiences.

One of the seeming mysteries about Rock of Ages three years after its Broadway bow is its unlikely appeal to a wide range of ages. But it doesn’t mystify the 24-year-old Scott who was barely born when these tunes dominated the airwaves.

“You have the nostalgia aspect… for the people who grew up with it and that whole subculture who went to bars and had all the hair, know the political figures and pop figures. It’s kind of looking through a yearbook or an old photo album.

“But I think, in addition, and this is what makes the music is so great, there is a certain high energy that accompanies that music. It’s just good fun.” It’s the kind of music, he said, that makes “a kid jump around the bed and sing along…. It’s real and it’s honest.” 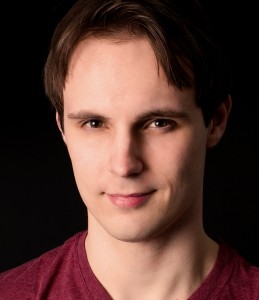 Music is actually his second love. He was interested in rock music as a child because his father was the lead guitarist for a band, Hollow Spirit,  that toured Europe during the same period reflected in Rock of Ages.

“But my dad, his influences were more like British invasion; the Beatles were his favorite. He definitely introduced me to classic rock, so I didn’t grow up listening to Whitesnake. I was more Led Zeppelin and Aerosmith, although I did listen to Van Halen. I was more ’70s like Deep Purple.”

Rather than encourage rock dreams, his father enrolled him in four years of classical piano study that encompassed being invited to be a guest artist for the Chopin Foundation’s annual concert. Those piano lessons would pay off much later when Scott realized that he could write, play and record anything by himself with the technology that was eventually developed. But music didn’t fulfill him the way theater did.

“I was always acting. I studied musical theater, acting singing and dancing.” He performed in shows at the Miami Children’s Theater and The Musical Miracles, studied all aspects of performing, even earned some pocket money as a clown for children’s parties. He spent one summer training with a children’s circus at the French Woods Festival where he learned skills used in aerial acts like trapeze stunts.

But it was the children’s theater experience, he recalled, that “was really cool. I got to perform a lot of roles I’d never have, like Jean Valjean (in Les Miserables) and when will a 16-year-old get to tackle that? I got to learn a lot from that experience (such as) how to really learn to lead a show.”

At New World, he found the venue to develop his love of musical theater. His senior thesis was to write and direct Amish the Musical. “My last semester, I’d go to class at 7:30 am., get out at 4, and still be there at one in the morning building sets and costumes.”

He had been with Rock of Ages exactly one year when he did the interview last week and he has a contract that lasts through next September. While he gets time off in spurts, it’s a long haul. Playing the lead in a Broadway musical is legendarily exhausting and the high energy level required by Rock of Ages ups the ante.

But he copes — happily: “You sleep a lot. But you have to find the energy. People are paying tons of money to see the show. It’s your responsibility to deliver. Some nights are easier than others, but it helps to love it.”

For a promotional video of Rock of Ages, click here

To see of a video of the band Domin8trx, click here.

This entry was posted in Features and tagged Broadway Across Miami, Rock of Ages. Bookmark the permalink.