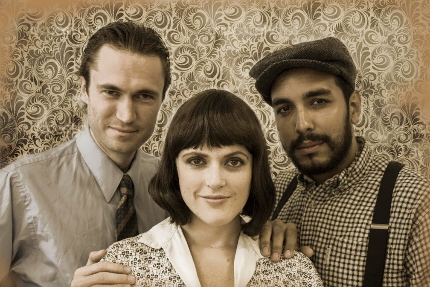 Perhaps if that genre changing, multiple award-winning musical theater opera Rent hadn’t eclipsed everything that arrived on a New York stage in 1996, maybe the Obie Award-winning, seven Drama Desk Award nominated Bed and Sofa would have received the attention it deserved.

At least that’s the way Skye Whitcomb sees it. Whitcomb, the artistic director of Outré Theatre Company is directing the Polly Pen and Laurence Klavan silent movie chamber opera Bed and Sofa in its Southeastern premiere inside the Abdo New River Room at the Broward Center for the Performing Arts.

Those four words, silent movie chamber opera, are oxymoronic in themselves. “Bed and Sofa is radically different from most musical theater. It is an operatic musical based a 1920s Russian silent film, which does sound odd to have a musical based on a silent film,” agreed Whitcomb.

The original Russian title of the silent film was Tretya Meshchanskaya, a reference to working-class street in Moscow, Third Meschanskaya Street. Translated, it means Third Bourgeois Street. However, one translation used for the film, according to Whitcomb was Ménage à Trois, French for household of three. In Germany, it was called Three in a Basement; in English speaking countries, it was titled Bed and Sofa.

Released on March 15, 1927, Abram Room’s silent film was perceived as so scandalous it was banned not only from Russia, but England and the United States.

It’s the story of Kolya, a stonemason and his wife, Ludmilla, who live in a cramped basement apartment. She’s a housewife who stays at home dreaming of romance. With Moscow in the midst of a housing shortage, Kolya’s army buddy Volodya arrives with nowhere to live. When Kolya invites him to take refuge on the sofa, then leaves town on for work for three weeks, the trio’s lives get complicated. When he returns, his friend is sharing his bed with Ludmilla. So who will now sleep on the bed and who will sleep on the sofa?

The silent movie was a sharp turn from anything that had been done previously in the Soviet Union. For the past decade, the Soviet government had kept an iron hand on all forms of expression to the public, such as cinema, maintaining that everything should be under the guidance of the State, leaving little room for anything that didn’t tout or praise the U.S.S.R. and life in the country as joyous and rosy.

“Until this point, all art in Russia had been for the elite,” said Whitcomb. “Opera, ballet – the common people really had no high art. This was after Lenin had died but before Stalin had solidified power so during the 1920s there was this explosion of art for and by the regular person.”

Tretya Meshchanskaya was also revolutionary for its treatment of sex, abortion, and women’s rights. “It’s a great show to start our ‘Power of Woman’ season, since Ludmilla is really the linchpin of the story. Rather than allowing either of the men to define who she is, she makes that decision on her own, to be whoever it is that she wants to be,” explained Whitcomb. “It was ahead of its time.”

Composer Pen collaborated on the silent movie musical with college friend Klavan. The librettist was a silent film buff and shared with her his love of the quirky Bed and Sofa. Pen was known for another repressive atmospheric two-character musical, Goblin Market, which had premiered almost ten years earlier, adapted from a poem about Victorian-era sisters.  The idea of this same type of social consciousness shown in the silent film spurred in her ideas. Their musical premiered off-Broadway at the Vineyard Theatre in New York City in 1996.

The three-person chamber musical honors silent movies, whether Russian or American for that matter. And there is plenty of homage to silent movies and their conventions that Pen and Klavan have infused in the play, including silent movie scenes where there are small stretches of, well, silence.

“It’s what Stanislavsky called public solitude,” said Whitcomb. “You’re just watching a person be a person. There are moments where nothing has to be said and that’s difficult to pull off on stage.” In Outré’s production of Bed and Sofa, the director and assistant director, Sabrina Lynn Gore, decided to extend these solitary moments. “We’ve added a few and some of the others that are in the original we’ve stretched. It adds to the feeling that the work does come from a silent film,” said Gore.

There are also other elements Outré has created to make its version of Bed and Sofa original as a “tip of the hat” to the silent film. “We know where this material emanated from, so let’s have some fun with it,” Gore explained. “Where a silent film is black and white, we’ve added overly vibrant color.” This is especially seen, she said, in the costuming, which she has designed. Whitcomb designed the set. “This is very much an in house production. It’s not that we thought we could do it better than some of the costumers, lighting designers and set designers we’ve worked with in the past – it’s just that we knew exactly what we wanted,” explained Whitcomb.

For his set, the two-room basement apartment of Kolya and Ludmilla, Whitcomb said he paid most attention to the interior of the home. “It is the most detailed because it is the central location and it’s where everything spirals out from. This is the place where everything that matters happens to them.”

Outré’s production ensures that the comedy pervading Bed and Sofa is not missed. “There’s an absurdity that these people would live in this situation because they don’t really have a choice,” remarked Gore.

Whitcomb remarked that the actors – Elvin Negron as Kolya, Noah Levine as Volodya and Rebeca Diaz as Ludmilla are “doing a fantastic job exploring the comedy.” He recalled a recent rehearsal where Diaz confided that she was afraid when she was cast in the show that it was going to be a “very dark play.” But, he said, that she has found “the charming and poignant humor that runs throughout the piece.”

Musical accompaniment features only three musicians, a pianist, cellist and violin. Caryl Fantel is music director and pianist; cellist Konstantin Litvinenko and violinist Liuba Ohrimenko, both of whom had played with the Miami Symphony Orchestra, complete the trio. Was it purposely planned that the two string players would be Eastern European? Litvinenko is from the Ukraine, while Ohrimenko is from Moldovia. “It was a bit of a happy accident,” said Whitcomb. He recalled the day he presented Ohrimenko with the score. “She had never heard of the film, but she immediately got on her (cell) phone and went to the Eastern European version of You Tube and looked it up. She started watching the silent film clips and was excited to be involved in a production like this.”

Bed and Sofa replaced Threepenny Opera that was originally slotted. When Outré’s producers were going through their list of “about 150 plays that they dream of doing,” Bed and Sofa stood out as the perfect replacement. “It doesn’t fit neatly into any category,” said Whitcomb.

The replacing of Threepenny (almost ironically because of its name), according to the producers, came down to finances.

“After having a series of long discussions with our finance director and our board of directors, we eventually had to agree that it wasn’t fiscally responsible for us to produce such a large musical right now,” explained Gore. “We had already cast the show with every intention of producing it and had to go back and tell actors they were no longer going to be part of it; at least not at this time. Everyone was disappointed, but, I think at the end of the day, everyone was grateful we were at least honest with them. Bed and Sofa, being a smaller show, was definitely more financially doable for us.”

Gore said the company “fully intends” on staging Threepenny Opera. “But at a time in the future where we can really give it all we have and do it right.”

And there was more philosophy behind staging Bed and Sofa. Outré in its fourth season is starting to find its voice. “What we’ve learned is that what we do very well are these smaller scale, more off-Broadway type musicals,” said Gore.

The artistic director (Whitcomb) and the managing director (Gore) are unapologetic when they say that Outré looks for shows that other companies might not take on, using words like “risk,” and statements such as “You may hate our shows or you may love them, but whatever the case, you’re going to think about what you’ve just seen.” Whitcomb said there has been a running joke since they started the company that if at least one or two people didn’t walk out of one of their shows, the company wasn’t doing its job right.

This will be the third show Outré’s produced in the Broward Center for the Performing Arts space. having moved from their location in Boca Raton’s Mizner Park after two years. The pair agree that the Broward Center is more in line with where they want to evolve the company. “(Broward Center) is much more welcoming and open to the kind of art that we want to produce,” said Gore, who added that the people in charge of their former Boca Raton location were pushing for them to do more “family friendly” shows. “We aren’t opposed to that kind of work; it’s just not what we want to do,” she said.

The move to Broward County has also, according to Gore, “changed our perspective just a bit. There’s been a bit of a learning curve, but we don’t regret it. I think once audiences see Bed and Sofa, they will appreciate the change.”

Bed and Sofa opens Aug. 28 and runs through Sept. 13 at the Abdo River Room at the Broward Center for the Performing Arts, 201 SW Fifth Ave., Fort Lauderdale. Performances at 8 p.m. Friday-Saturday, 2 p.m. Sunday. Tickets available by calling (954) 462-0222 or visit browardcenter.org.