Talkin’ in the Green Room With: Gregg Weiner 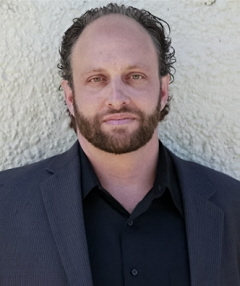 A colleague recently referred to Gregg Weiner as South Florida’s Gene Hackman – always working, highly-respected, focused, intense, funny, an actor who brings a character actor’s technique to leading man parts. Little do they know about his history with puppets, karaoke and perhaps a blow-up doll. Weiner is usually physically recognizable in a role but convincingly inhabits a wide variety of parts from a troubled spouse in Fifty Words to a corporate suit in TV’s Magic City to a sleazy wrestling promoter in The Elaborate Entrance of Chad Deity. This weekend, Weiner closes a run as a pragmatic lawyer in GableStage’s Race, the fourth role he has done for director Joe Adler this season.

How long have you lived/worked in South Florida? On and off for 23 years. Lived in NYC for a total of 7 years on and off and Los Angeles for a year.

What school did you graduate from?  New World School of the Arts/ University of Florida

Do you do much preparation for a role? Do you memorize your lines before the first day of rehearsal? Do you study the character’s profession? Do you work up a back story? What’s your process?  It really depends on the play and the line load.  Being that we have three weeks to put on a show, I found that by week two of the run was when I was truly comfortable with my lines and character.  So the larger the role, the more prep work I will do, if I have that luxury.  For  Red, a few months before we started rehearsals I would read the play every day.  I read up on Rothko.  I read his writings, looked at his pictures (his paintings and photographs of himself) to help prep. (I do a ) back story if I need to. I also made my girlfriend go over the script almost once a day before rehearsals started.   She still thinks she could’ve played Ken!!!  It’s kind of a show by show thing.  If I need a certain tool I’ll grab it and use it.  Ha. I said “tool”. Point of view is a huge one for me to understand a character.  When I’m lost in the beginning of a process, I’ll do a lot of point of view writing and try and find what the character thinks of the world in which he lives.

We never see you in a musical. Why? I sang a lot of karaoke in another lifetime but that’s about it.  I could probably hold my own in a chorus but at this point it’s not something I pursue.  Have you ever done one? I did a few in college actually.  I played Mr. Peachum in Threepenny Opera. It was a character role so I took voice lessons and learned the songs and lines a month before we went into rehearsal.  People said I was good, but who knows if they were lying or not!

What role/play are you dying to do but no one would think of you for?  Annie.  Title role.

What show do you wish somebody down here would produce? Rocky.  🙂 But I don’t think they have the stage version written yet.  I asked my parents if I could change my name to Rocky when I was young. True story.

What show will you be happy never to see again unless it gets you a job? That’s a loaded question and I fear if I answer truthfully,  it may in fact stop me from getting a job so… nice try, Bill.

What do you say when someone you like is in a terrible show or does a poor job? “hey!!!!!!!!….lotta lines ya learned there huh?”  I don’t offer my opinion unless I HAVE to. Or if I am asked.  I’m not one of those people who thinks my opinions are gospel.  That being said I love when I get to say “great job, great show.”

How do you cope when there are more people on stage than in the audience? You do your job.  Some of my best shows were done in front of three people.

What’s the hardest/easiest part of what you do?  Hardest: uncertainty of what’s next.  Easiest: Knowing that I will be successful. And that’s not me being cocky.  I have to believe that or else life will be rough.

Do you have any pre-show rituals? I like to make jokes and relax.  Right before an entrance or the top of a show I empty my brain.  It’s a li’l ritual I started before Dumb Show.

What was the first show you were involved in and what did you do? The Little Drummer Boy in 4th grade. Got snubbed by the Carbonell committee. Still bitter about that one cuz I thought, to date, it was some of my most layered and authentic work.

When did you know this was what you wanted to do and why? Districts my senior year of high school.  Scene from Art of Dining.  I played a waiter I think, and Todd Durkin was actually in it as well.  We performed it in a packed room. People laughed a lot and afterwards I had this feeling that this is what I was meant to do.  Make people laugh. And since then.  It’s one of the few things I can say I still love doing.

What do think has been your best work in the theater to date, and why?  Dumb Show (at Promethean Theatre with David Sirois and Deborah Sherman). It had a nice balance of comedy and drama but more comedy, which I’m a huge fan of.  I was as prepped as I’ve been for a role and really felt relaxed going into opening night.

What do you think was your worst, and why didn’t it work?   It was a play I did in NYC with some college friends who had started a company.  Lysistrata.  I was horrible.  I don’t why it didn’t work.

What was your best experience working in theater? Pillowman (at GableStage with Antonio Amadeo) was definitely one of favorites.  Just a great script and fun people and a growth experience for me as well.

What one role/show would like to do over or just do again?  Shining City, Speed the Plow and Dumb Show.  And Red.  Seafarer and That Championship Season.  All shows where I was mostly proud of the work but would really like to dive back in now being the actor I am today

What’s your day job? At the moment.  I’m an actor.

What’s the weirdest/worst non-theater job you ever had?   I used to emcee weddings briefly. Did too much telemarketing as well.  I was a headhunter in NYC.

Do you have unexpected special talents and skills?  I used to be a puppeteer with my mother. She started her own business called It’s A Puppet’s World and we did over 20 different shows ranging from Passover to a Circus Review.  She (mom) kept us afloat in some tough times with that family business.

What would you do if you couldn’t be in theater?  Architecture. Or photography.

What’s your most unforgettable theater experience? Honestly.  None of them are forgettable.

What TV programs do you DVR when you’re working a show? I don’t have a DVR, but if I did I’d have To Catch a Predator and Cops.  There’s just something so funny about watching people back peddle when they’ve been caught dead to rights in the act of breaking a law. Sometimes it’s depressing but most of the time it’s a fascinating character study of human beings.

Whose music can you not live without?  Notorious B. I. G.

Why doesn’t South Florida theater have a higher profile nationally?  I don’t think we have the numbers personally. Especially with all the closings of late. My view on the quality of theatre may be skewed but I just think it’s a numbers thing.  You go to NYC and for every good play there’s 80 that are bad.

Finally, add a question you wish I had asked.  What was your upbringing like?

This entry was posted in Features and tagged GableStage, Gregg Weiner, Pillowman, Red. Bookmark the permalink.

One Response to Talkin’ in the Green Room With: Gregg Weiner