August Wilson’s Fences Is Moving But Not Volcanic Edition 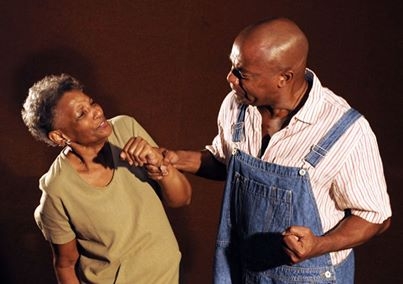 The power of storytelling – swapping tales on the porch or watching a familial drama unfold on stage – is the keystone of AAPACT’s production of August Wilson’s Fences.

The earnest edition noticeably lacks the Shakespearean power of other productions, but the accretion of calamities grows through its second act until the audience is moved by a tragedy born of two centuries of racism coupled with a personal self-destructiveness that knows no ethnicity.

The African American Performing Arts Community Theatre’s production directed by founder Teddy Harrell Jr. is a respectable rendering that depicts backyard banter erupting into interpersonal clashes. But the bulk seems to be the sharing of uncounted stories that range from an accurate recounting of the black diaspora to a rosy revisionist account of a courtship to a hallucinatory confrontation with Death incarnate.

If the production is missing the volcanic performances and therefore the tragic downfall oft compared to King Lear, AAPACT’s cast is remarkably adept at delivering both Wilson’s relaxed syntax of genial chatting, as well as the tougher challenge of making his flights of heightened near-poetic language sound like natural verbiage. Still, this Fences could use a little more passion, especially in the first act.

Fences is the third play in Wilson’s heroic cycle of 10 plays covering the social and personal history of African-Americans, one play covering each decade of the 20th century. This entry set in the 1950s is one of the most accessible. It won the 1987 Pulitzer Prize as well as several Tony Awards in its initial Broadway run featuring legendary performances by James Earl Jones and Mary Alice. An acclaimed revival in 2010 starred Denzel Washington and Viola Davis.

The story focuses on Troy Maxson who emigrated from the Deep South to Pittsburgh around 1918, married young, fathered a son Lyons, became a street robber, accidentally murdered a man and emerged from prison 15 years later with a skill in baseball that he could never transform into the career he sought. But the love of his second wife, Rose, and the support of a former prison-mate Bono have helped him straighten out.

Now at 53 years old, he has created a second family who he supports as a garbageman with enough seniority to be pressing his boss to make him a driver rather than someone lifting barrels. He owns a modest ramshackle home, is raising a second teenage son Cory and has kept an eye on his brother Gabe who was brain damaged during World War II.  He has established such stability that he is chafing at the shortcomings of his predictable life, still constrained by his own failings as well as the changing but persisting prejudice of the pre-Civil rights era.

The Maxsons spend much of their time around the back porch. Troy is constructing a high fence around the yard, but the tall planks can’t keep trouble outside because the inhabitants bring it in with them. Instead, the walls form a crucible in which interpersonal relationships roil with little hope for escape.

Just as confining are the metaphorical fences that Troy builds around his feelings, especially his ability to express his affection for Cory. In one of Wilson’s fabled scenes, Cory asks his father if he likes him. Troy angrily asks what “like” has to do with anything. He provides for his son. Fulfilling that responsibility is all that matters; “like” is an irrelevant concept. The tragedy is that he cannot explain to his son that his steadfast loyalty to those duties is an expression of his love.

Maxson is a brilliantly-envisioned flawed hero of warring parts: gentle with Rose, stern with Cory to the point of cruelty, convivial with Bono and Gabe yet harboring a seething resentment at society’s unfairness. His list of traits goes on and on to create one of the most three-dimensional beings in American theater.

But all that stasis is doomed as he selfishly and ham-handedly tries to cope with the possibility that Cory’s shot at a collegiate football berth might eclipse Troy’s abortive try to enter major league baseball decades earlier. That is only one of the challenges that Troy fails to handle with integrity, sending him into a spiral that undoes much of what he has built. In the end, Fences is about how the major characters succumb to or prevail over their personal baggage, no matter how much it might have been created by social forces beyond their control.

Every production hangs on the performance of the actor portraying Troy and the choices that the actor makes with the director. Larry Robinson creates a different Troy than we’ve seen before. Physically a good fit, Robinson is tall and lanky with muscled arms. The persona his Troy exudes is of an amiable grinning fella you’d see on the street rather than an iconic figure with dreams and flaws too large for his life. While that irises down the size of the play and the depth of his fall, it also makes Troy more recognizable and relatable to the audience. We care about the man Robinson creates, but we miss the aura of danger that you get from seeing a volcano that has been capped too long. Still, more than anyone in the cast, Robinson’s bass voice accented with a metallic glint embraces Wilson’s language with a persuasive naturalism, even when Wilson gives him gorgeous metaphors like describing making love as “blasting a hole in forever.”

Carolyn Johnson is one of the region’s finest actresses; we will never forget her aging drug-addicted grandmother in Fabulation at the old Public Theatre.  Here, she invisibly dons Rose’s skin so completely that she erases any perception of a performance. She makes credible Rose’s clear-eyed loyalty to a flawed man she loves. But she, too, is far more subdued than other actresses in a part that has the ability to scorch paint from the ceiling.

Roderick Randle is just passable as Cory, not really communicating the melding of banked fires of respect and resentment that the son is struggling with as he leaves adolescence. The one exception is when Randle’s Cory faces down his father. Suddenly, Randle fully inhabits Cory as if he was breathing life into a previously deflated shell. Whatever he’s doing right there ought to be visited upon the rest of his performance.

André L. Gainey, a veteran of AAPACT and M Ensemble productions, brings a tireless smile and sparkle in the eyes to Troy’s loyal sidekick, Bono. Charles Bonamy makes a solid impression as Troy’s mentally ill brother who roams the streets thinking he is the Archangel Gabriel calling out to St. Peter with a gravelly hoarse voice. Darryl Vaughn is convincing as the older son Lyons who hides his wastrel ways behind a passion for playing jazz in local clubs. Lara Storm and Miracle M. Menzies alternate as a young girl who enters the Maxsons’ lives.

With a relatively shallow stage, Harrell mostly has people sit and stand talking to each other without a lot of moving about the backyard. This works most of the time since it’s a play of people telling those stories. But the few moments of kinetic action, such as Cory attacking his father, flash by so quickly that they are not at all believable and don’t allow the audience to register what has happened.