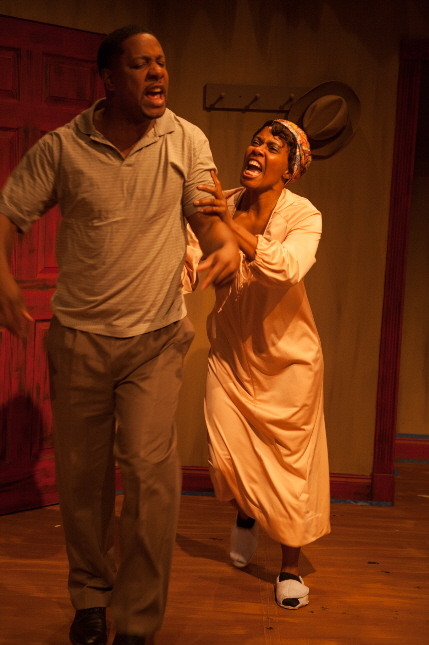 Imagine white water rapids raging past you; now imagine the liquid is molten lava – a heedless force of nature threatening to destroy everything in its indivertible path.

Such images are the natural by-product of watching the incomparable Ethan Henry once again bring one of August Wilson’s flawed tragic heroes to three-dimensional life, this time in M Ensemble’s The Piano Lesson.

A distant cousin from his magnificent portrayal of Wilson’s King Hedley II for M Ensemble in 2012, Henry creates a man who can taste for the first time a chance for self-respect and economic security in a bigoted world – only to find it blocked by family who’d rather honor the race’s heritage.

Henry’s Boy Willie is a man whose back-slapping over-ebullience cannot disguise a ravenous hunger and profound inner pain that will drive him to run roughshod over anything, everything, anybody now that a fleeting shred of opportunity has appeared. The force of that drive is exemplified every time Henry opens his mouth in a torrent of verbiage resembling water spewing out of a fire hydrant that some neighborhood kid opened up.

The rest of the production directed by André L. Gainey has virtues including the performance of Makeba Pace as Willie’s strong-willed sister Berniece who stands in his way. The production’s significant shortcomings, and there are a few, are overshadowed by these two performances.

This fourth in Wilson’s 10-play cycle once again has two simultaneous streams. One thread eavesdrops on the everyday kitchen sink lives of African-Americans, one play for each decade of the 20th Century. But like others in the canon such as Radio Golf, Wilson’s The Piano Lesson sets up a seemingly irreconcilable conflict between those wanting to revere the sacrifices and culture of the past, and those who willing to scrap it if it impedes the forward enhancement of their fortunes in the present.

The action is set in 1936 Pittsburgh’s ghetto of the Hill District in the modest home that Berniece shares with her aging uncle, Doaker (Lowell Williams), and her 11-year-old daughter, Maretha (Danielle-Rae Lockhart.) Long before dawn, Boy Willie bursts into the living room, a manic blaze of nuclear energy. He has been absent for years working as a sharecropper in the family’s home in Mississippi, serving a prison stretch and doing odd jobs with his buddy Lymon (Scott Wesley). The two men have driven a ramshackle truck the thousand miles to Pittsburgh for various reasons. They plan to sell a large crop of watermelons. Lymon, something of a hayseed, wants to stay in the North where he expects to find less overt prejudice, score a job and chase women.

But Boy Willie wants to buy farmland owned by the white family who enslaved their ancestors and whose remaining heir has mysteriously died by falling down a well.

To do it, he needs the money he has saved plus the money from the watermelons plus, crucially, to sell a cherished family heirloom – an imposing upright piano whose wood has been carved into portraits of their family as well as scores of intricate depictions of African-American life stretching back across the sea.

Berniece refuses to countenance the idea. In the background of their ensuing struggle is that she holds Willie responsible for the death of her husband three years earlier in a confrontation with law enforcement over supposedly stolen firewood. She also wonders if Willie had anything to do with the death of the landowner.

As with several of Wilson’s plays, folklore mysticism is woven into the lives of protagonists like Berniece and Doaker who do not doubt the reality of supernatural elements. Everyone sees the ghost of the landowner, any attempt to touch the piano produce eerie changes in sound and light, and tall tales are spun about a local legend back home of the murderous Yellow Dog.

Everyone in the play has a dream forged to some degree by the baggage of the past. It all adds up to an inevitable confrontation that cannot end well for somebody.

The long evening (“long” usually applies to Wilson’s work) does suffer in a few ways. As admirable as Henry’s performance is, Gainey does not rein him in very much, so Henry is working full-out nearly the entire play, which is not realistic.

Additionally, M Ensemble has a modest budget that cripples the show in a few ways. First, the carvings in the piano silently invest the object with gravitas and worth that Willie is brushing aside. But M Ensemble could only afford a conventional piano with three circular ornaments placed on the music rack that look like they were picked up at Pier One. Further, ghosts cohabit in this house, especially in the piano. Those are indicated here with rudimentary sound effects and lighting that are more risible than convincing.

That robs the production of the mystical bond that the family has with the past – the silent but evident crucial counter-balance to Willie and the fuel for Berniece’s resolve which she does not articulate. It also makes the last crucial minutes of the resolution confusing — including two conflicting exorcisms – if you haven’t thoroughly grasped all that is going on.

As with many Wilson plays, characters do ramble on and tell a lot of stories; the audience needs to recalibrate its metabolism to savor this opportunity to peek into the prosaic but precious meat of their lives.

But the show is blessed with the fiery clash of Henry with his unfettered joviality and Pace with her steely steadfastness.

Those unfamiliar with Henry’s work won’t realize how much of the voluble and volatile Boy Willie is constructed out of skill and craft. Besides Hedley, he was a yearning but respectful Walter Lee in Palm Beach Dramaworks’ A Raisin in the Sun, the conservative lawyer in GableStage’s Race, the conscienceless hustler in Primal Forces’ Sunset Baby and the stern police lieutenant in a reading of Christopher Demos-Brown’s soon-to-be produced American Son. The sole problem is that Henry, who can speak Shakespeare if need be, adopts an authentic-sounding vernacular, which is hard to understand sometimes as the tsunami of words race by.

Pace, who was simply brilliant as the fulcrum of Sunset Baby, also shows her range here with her creation of a working widow trying to raise a daughter alone. Her Berniece is a lovely woman paralyzed in the past, unwilling to serious consider another relationship while mourning the death of her husband three years earlier. While she doesn’t get to roar like Boy Willie, her certainty in the rightness of her position is visible in her tigress’ eyes.

Filling out the cast is Chat Atkins as Doaker’s brother, a ne’er-do-well who once had a career as a pianist but now lives in the past and a bottle; Ray Lockhart as Avery, a newly-minted minister who pursues Berniece; and Chartia Joseph as a young woman pursued by Willie and Lymon for carnal purposes.

Founded in 1971, The M Ensemble Company is the oldest African American theater company still producing in the state of Florida, long enough now to have produced all of Wilson’s co-founders Shirley Richardson and Patricia Williams have kept it going through challenger after challenge, and venue and after venue.

Currently, it is performing in a black box classroom inside North Miami Senior High School where Gainey is resurrecting a theater program. But the troupe plans to move next month to a brand-new building at 6101 NW 7th Avenue, Its future plans are to start over the Wilson oeuvre beginning with Fences around May.

For the time being, content yourself with one of the most overwhelming performances of the season, Henry’s Boy Willie.