Posted on February 4, 2019 by Bill Hirschman 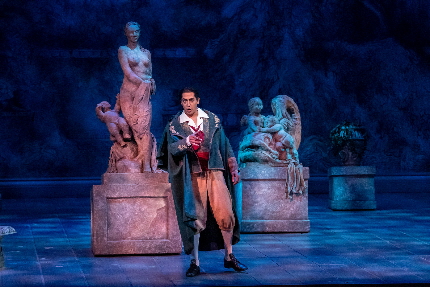 Florida Grand Opera does daring works (we’re looking forward to the upcoming final two of the season, Frida and Werther), but, to satisfy audiences who prefer to see the familiar, there is company’s latest offering The Marriage of Figaro (Le nozze de Figaro).

That familiar and household name, 18th century composer Wolfgang Amadeus Mozart, wrote the music, and Italian Lorenzo da Ponte penned the libretto for the comic opera. Based on a French play written in 1784 by Pierre Beaumarchais, the French farce is very much evident in this Upstairs, Downstairs-esque story of servants and those they attend to, behind-the-scenes love trysts, betrayals, and, of course, marriages and a happy ending.

FGO’s production is enjoyable, fanciful, and the singing and acting superb. Yet if there was only more farce, more folly in this folle journée (crazy day), more slapstick, more comic chaos. Director Elise Sandell perhaps wanted to bring forth more of the sexual and class politics, which are so prevalent in Figaro. In her program, she notes that these conflicts have become, once again, more prevalent today’s society. And, so, if that is the message, bring on the heightened statement in favor of a broad comic approach. Yet, in this interpretation, the commentary and comedy stays on equal footing, and neither are bold enough to make any sort of impact.

In defense of the plusses of this production, Figaro has been put through the “let’s update this classic opera” more times than one can count. Companies have placed it in Paris following World War II or a 1988 production set in New York City’s Trump Tower 50 floors above Fifth Avenue.

So, kudos for leaving Figaro, and the merry band of zany characters exactly where they belong: in a country house near Seville, Spain in the late 1700s. FGO’s traditional production maintains its setting and it is one of the most delightful of the elements, being swept back in time, with much help from the beautiful period costumes by Howard Tsvi Kaplan and Susan Benson; Benson is also set designer.

The libretto tells the story of Figaro and Susanna, a servant couple who wish to marry. They work for Count Almaviva who boasts that he has repudiated the right of the lord to have sex with any of the women in his service. But the audience sees differently as he lusts after Susanna. There’s also a pageboy – here the perfect display of opera’s famous trouser role. Mozart loved to use this device, also called the breeches role in which a young male character is sung by a woman. Here is a missed opportunity as Cherubino is played close to the vest. The adolescent sexual yearnings of Cherubino (with the audience clued in that this is being played by a woman) has so much potential for it to be risqué and hyper-sexual on so many levels. FGO Studio Artist mezzo soprano Mariya Kaganskaya clowns it up as Cherubino, but the dressing room scene where the page hides out trying to become disguised as a female lacks the necessary no-holds-barred slapstick.

While all of the leads had a firm grasp of their characters, the two females were the standouts. And, if for no other reason, see Figaro for soprano Lyubov Petrova as Countess Almaviva. Petrova has a bio that stretches from the Bolshoi Theatre to the Metropolitan Opera House. Her Countess is a wounded dove at the mercy of her emotions and affection for the two-timing Count.  Her exquisite approach to the aria Dove sono is full of torment and sorrow, then as the tempo shifts upbeat, Petrova’s strong vocal line broadens beautifully to resound an air of hope. The audience hold their collective breath.

There are magical moments aplenty. Elena Galván is a Susanna for the #metoo movement, a take no bull chambermaid in sharp contrast to the vulnerable Countess. Galván has this likeable chemistry that shows through on her duets with Figaro and the Countess.

Baritone Jonathan Michie is absolutely villainous as the Count, the narcissist who doesn’t understand nor care to consider others in his actions. Michie finds the balance between buffo and drama, especially in the Count’s introspective aria Vedrò, mentr’io sospiro that opens Act III. Calvin Griffin as the Count’s valet Figaro recalls the commedia dell’arte figures of the Italian theater of the same time period. His Figaro has the quality of a silent movie star a la Buster Keaton, but proves his vocal skill with his bass-baritone. His voice is rich and commanding, but his comic skill present in Non pui andrai, as he teases Cherubino before the lad is sent off to the military.

In supporting roles, Zaray Rodriguez as the conniving Marcellina shows comic flare, and Rafael Porto as Doctor Bartolo is her equally convincing companion.  Dylan Morrongiello is the foppish Basilio as well as playing the role of Curzio. Simon Dyer steals scenes and gets plenty of laughs with his bumbling drunk gardener Antonio. Evan Kardon, another Studio Artist with FGO, as Barbarina, makes an appearance late in the opera, but well worth the wait as the soprano’s aria is so confidently rendered. She is a wonderful breath of fresh air.

As comic opera’s go, Mozart’s The Marriage of Figaro looks simple, but there is complexity plenty packed into its four acts. Where FGO’s production succeeds is in its development of its characters and with the loving attention and respect for Mozart’s absolutely magnificent score. Conductor Andrew Bisantz’s brings his orchestra to emotional heights and searing crescendos in capturing Mozart’s intended gusto.

This entry was posted in General and tagged Florida Grand Opera, The Marriage of Figaro. Bookmark the permalink.