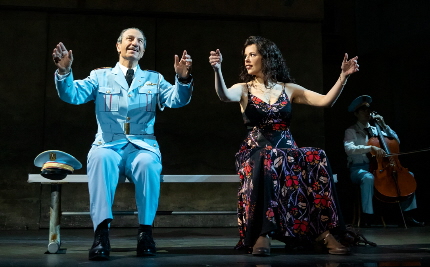 Classic reliables, a few shows you likely haven’t seen and some blockbusters are among the titles announced this month by more South Florida theaters in their 2020-21 seasons before subscription-buying snowbirds head home.

Broadway in Fort Lauderdale has one of the most promising seasons in some time, including an acclaimed play, believe it or not, To Kill A Mockingbird starring Richard Thomas, along with the hilarious The Prom and the much-admired The Band’s Visit starring former Miamian Janet Dacal. Oh, and the return of Hamilton.

Actors’ Playhouse on the Miracle Mile in Coral Gables continues its decades-long campaign to attract Latinx patrons with On Your Feet!, the Emilio and Gloria Estefan bio-musical that played Broadway and the national tour circuit. The Wick Theatre in Boca Raton is mounting a show favored by its customer surveys, Damn Yankees, and Lake Worth Playhouse once again aims high with the American epic Ragtime.

(Note: A seven-show subscription package includes all of these. The usual six-show package requires choosing between The Prom and The Band’s Visit)

Oct. 13 – 25, 2020
To Kill A Mockingbird
Aaron Sorkin’s adaptation of Harper Lee’s Pulitzer Prize- winning masterwork has accumulated rave reviews across the board in New York where Atticus Finch has been played by Jeff Daniels and Ed Harris, and is slated to be played by Richard Thomas on the road. The New York version directed by Bartlett Sher is still running on Broadway.

Nov. 17 – 29
Cats
At least, there’s no CGI. But there are new design elements and choreography.

Dec. 15 – 27
Tootsie
A surprisingly solid, funny and charming musical comedy adaptation of the classic film. (To read our review of the Broadway production, click here. http://www.floridatheateronstage.com/?s=tootsie). It tells the story of Michael Dorsey, a talented but difficult actor who struggles to find work until one show-stopping act of desperation lands himng  the role of a lifetime. You know what approach is. The score is by Tony-winner David Yazbek (The Band’s Visit, Dirty Rotten Scoundrels).

Jan. 12 – 17, 2021
The Band’s Visit
The critically acclaimed smash-hit Broadway musical won 10 Tony Awards, including Best Musical, and a Grammy for Best Musical Theater Album. In this joyously offbeat story, set in a small Israeli town that’s way off the beaten path, a band of Egyptian musicians arrive lost, out of the blue.  Under the spell of the desert sky, and with beautiful music perfuming the air, the band brings the town to life in unexpected and tantalizing ways. The cast is led by award-winning Israeli actor Sasson Gabay, star of the original film, and the Broadway production. In the other leading role of the café owner is Dacal who was raised in Los Angeles and appeared on Broadway in In The Heights and Wonderland, but who considers Miami home and performed locally at Actors’ Playhouse.

Feb. 23 – 28, 2021
The Prom
This musical comedy is a solid hoot. (To read our review of the Broadway run, click here. http://www.floridatheateronstage.com/reviews/report-from-new-york-the-prom-is-very-strange-strangers-in-a-strange-land/) The idea is that a quartet of self-absorbed Broadway-diva types are dismissed by critics in their latest Main Stem extravaganza (The Eleanor Roosevelt Musical) as being past their prime and too irrelevant to merit much consideration or attention anymore. To get back on the front pages or the most Facebook likes, the washed-up stars seek out a cause to champion, with less altruism than opportunism in mind. They target a small Indiana town whose high school has cancelled the senior prom rather than cope with one student’s request that she be able to invite her girlfriend as her date. Features direction and choreography by Casey Nicholaw (Mean Girls, The Book of Mormon), a book by Bob Martin (The Drowsy Chaperone) and Chad Beguelin (Aladdin), music by Matthew Sklar (Elf) and lyrics by Chad Beguelin.

March 9 – 21, 2021
Pretty Woman: The Musical
The movie’s director Garry Marshall and screenwriter J.F. Lawton took the screen and turned it into a musical with direction and choreography by Jerry Mitchell (Hairspray, Kinky Boots, Legally Blonde), an original score by Bryan Adams and Jim Vallance, but keeping the Roy Orbison song “Oh, Pretty Woman.”

April 13 – May 2, 2021
Hamilton
If you have to ask…. But a note: Both national tours that have appeared in South Florida have been undeniably fabulous.

November 11 – December 20
On Your Feet
A musical filled with the hits of the Estefans and the Miami Sound Machine traces the rise of the creative couple and their triumph over racism and overcoming a crippling car accident. To read our review of the 2017 tour, click here. http://www.floridatheateronstage.com/reviews/estefans-bio-musical-on-your-feet-gets-miamians-on-theirs/

January 27 – March 14, 2021
Middletown
Local playwright Dan Clancy debuted this bare-bones four-character play at the Levis JCC in 2016, a joyful, intimate and universal depiction of love, life, and friendship. Through story-telling by two couples Don and Dotty Abrams, and Tom and Peg Hogan, it explores how they endured the ups and downs of life over 33 years of friendship. Featuring a rotating cast of celebrities, one set of performances will feature Cindy Williams (Laverne & Shirley) who is also appearing this spring in Nunsense at the Wick theater in Boca Raton. It is currently playing at the Public Theatre in New York. To read a review of the world premiere performance here in Florida, click here. http://www.floridatheateronstage.com/reviews/my-back-pages-in-middletown-detached-formalism-hamstrings-a-touching-narrative/

March 10 – April 4, 2021
Disney’s Newsies
Based on the cult Disney film, this hit Broadway musical tells a story of Americana with a rousing true story of newsboys who strike against unfair conditions in turn-of-the century New York City. The Tony Award-winning hit features a score by Alan Menken (Little Shop of Horrors) and book by Harvey Fierstein (Kinky Boots) and features exhilarating dancing and song while also delivering a timeless message about fighting for what’s right.

May 12 – June 6, 2021
Hank Williams: Lost Highway
This musical biography of the legendary singer-songwriter — one of the great innovators of American popular music — will follows Williams’ rise from his beginnings on the Louisiana Hayride to his triumphs on the Grand Ole Opry to his eventual self-destruction at only 29 and includes songs like “I’m So Lonesome I Could Cry,” “Move It on Over” and “Hey, Good Lookin’.”

July 14 – August 8, 2021
Now and Then
From Sean Grennan, the author of Actors’ Playhouse’s plays Making God Laugh, The Tin Woman, and Married Alive, this is reportedly an inspiring story of love and life. Sometimes what happens after the last call just might change your life. Jamie is a young aspiring pianist working as a bartender. He is closing up for the night when a desperate last-minute customer enters and offers him and his girlfriend Abby $2,000 to sit and have a drink with him. What follows is funny, moving and captivating.

October 15-November 15
Breaking Up Is Hard To Do
Take a trip back to 1960 and a Catskills resort with a trove of hit song by Neil Sedaka including “Where the Boys Are,” “Calendar Girl” and the title song, “Breaking Up is Hard to Do.”  This is a toe-tapping story of good times and romance over one Labor Day weekend. Breaking Up is Hard to Do features Didi Conn and Barry Pearl, stars of the original production of Grease. It was the last show that Broward Stage Door mounted in its Margate location in 2018.

December 3- 27
Meet Me In St. Louis
Based on the 1944 film, this family musical includes “The Trolley Song” (made famous by Judy Garland), “The Boy Next Door,” “Have Yourself a Merry Little Christmas,” and the title song.  This show stars the Stephanie Maloney, who starred as Fanny Brice in Funny Girl at The Wick last year.

January 14-February 21, 2021
Mamma Mia!
This may be the 49th production of this ABBA show in South Florida over the past three years, but fans absolutely adore it.

March 11- April 4, 2021
Damn Yankees
This 1955 Broadway hit won seven Tony Awards including Best Musical. Based on Douglas Wallop’s novel, The Year the Yankees Lost the Pennant, the musical comedy is jammed packed with classic songs including “Shoeless Joe from Hannibal Mo,” “Whatever Lola Wants,” and “Heart.”

April 23-May 17, 2021
Smokey Joe’s Cafe: The Songs Of Leiber & Stoller
This rock & roll revue features hit songs like “On Broadway,” “Poison Ivy,” “Yakety Yak,” Hound Dog,” and “Little Egypt” and holds the distinction of being the longest-running revue in Broadway history.

July 2-19
Hair the Musical
The American tribal love rock musical Hair celebrates the sixties counterculture in all its barefoot, long-haired, bell-bottomed, beaded and fringed glory. To an infectiously energetic rock beat, the show wows audiences with songs like “Aquarius,” “Good Morning, Starshine,” “Hair,” “I Got Life,” and “Let The Sun Shine.” Exploring ideas of identity, community, global responsibility and peace, Hair is being sold as remaining relevant as ever as it examines what it means to be a young person in a changing world.

October 1-18
9 To 5 the Musical
Pushed to the boiling point, three female coworkers concoct a plan to get even with the sexist, egotistical, lying, hypocritical bigot they call their boss. In a hilarious turn of events, Violet, Judy and Doralee live out their wildest fantasy – giving their boss the boot! While Hart remains “otherwise engaged,” the women give their workplace a dream makeover, taking control of the company that had always kept them down.

November 12-29
The Best Christmas Pageant Ever
In this Christmas classic, a couple struggling to put on a church Christmas pageant is faced with casting the Herdman kids-probably the most inventively awful kids in history. You won’t believe the mayhem – and the fun – when the Herdmans collide with the Christmas story head on! This delightful comedy is adapted from the best-selling Young Adult book, and has become a holiday staple for groups across the United States!

January 14-31, 2021
The Producers
With a legendary book co-written by Mel Brooks and Thomas Meehan (Annie) and music and lyrics b. Brooks, The Producers skewers Broadway traditions and takes no prisoners as it proudly proclaims itself an “equal opportunity offender!” Bialystock and Bloom! Those names should strike terror and hysteria in anyone familiar with Mel Brooks’ classic cult comedy film. Now as a big Broadway musical, The Producers once again sets the standard for modern, outrageous, in-your-face humor.

February 25 – March 14, 2021
Deathtrap
Comfortably ensconced in his charming Connecticut home, Sidney Bruhl, a successful writer of Broadway thrillers, is struggling to overcome a dry spell which has resulted in a string of failures and a shortage of funds. A possible break in his fortunes occurs when he receives a script from a student in the seminar he has been conducting at a nearby college-a thriller that Sidney recognizes immediately as a potential Broadway smash. Sidney’s plan, devised with his wife’s help, is to offer collaboration to the student for co -credit. Or is it?

April 8-25, 2021
Ragtime
At the dawn of a new century, everything is changing… and anything is possible. Set in the volatile melting pot of turn-of-the-century New York, three distinctly American tales are woven together – that of a stifled upper-class wife, a determined Jewish immigrant and a daring young Harlem musician – united by their courage, compassion and belief in the promise of the future. Together, they confront history’s timeless contradictions of wealth and poverty, freedom and prejudice, hope and despair, and what it means to live in America. 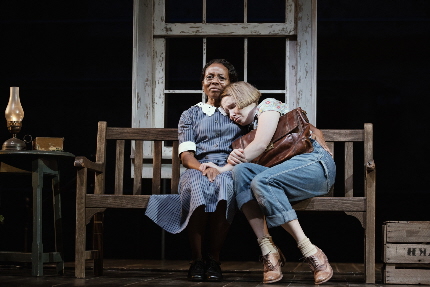 This entry was posted in News and tagged Actors Playhouse, Broadway in Fort Lauderdale, Broward Center for the Performing Arts, Lake Worth Playhouse, The Wick Theatre. Bookmark the permalink.