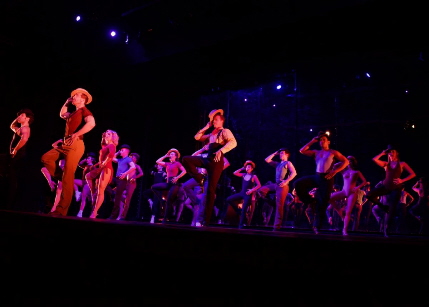 The Wick Theatre’s A Chorus Line — It will play this weekend, then postpone rest of the run. / Photo by Amy Pasquantonio

(Sunday Update: Some companies are unofficially working on very tentative rescheduling. Actors in The wick’s a Chorus Line are posting on Facebook that they may reopen April 23-May 17. Zoetic Stage actors are similarly saying they are hoping to reopen A Little Night Music April 9. We will follow up on these Monday.)

(Editor’s Note: This story is being updated frequently. We have a separate standalone list of closings and openings late in a sidebar.)

The Coronavirus is wreaking significant damage to what would have been one of the busiest weekends in the season with some shows  “postponed” to an uncertain date due to the closure of  presenting venues for two to six weeks. Some shows are being scrapped altogether and very few shows still plan on opening.

Among the indefinite postponements: the annual Carbonell Awards gala on April 6 and the eagerly awaited world premiere musical A Wonderful World at Miami New Drama.

The Broward Center in Fort Lauderdale is postponing and/or cancelling all shows through April 12 including Parker Playhouse events and Slow Burn Theatre Company‘s Ragtime which is tentatively rescheduled  to August.

One of the few shows continuing this weekend is Saturday’s opening of A Chorus Line at The Wick Theatre.  But it will postpone the rest of the run after Sunday.

In an email to patrons Saturday, founder Marilynn Wick wrote sentiments echoed in many similar messages that theaters sent out Friday, “As you can imagine, remounting a production on the scale that we produce takes significant cooperation and planning with our unions, tradespeople, staff, crew, musicians, and talent. Therefore, we are asking for your patience as we take the time to finalize our strategy for rescheduling these performances…. But trust me, The Wick Theatre family will find a way to create something special to honor your love and support…. And we humbly ask that you too, stand by us.  We need your kindness and understanding during this uncertain time.”

Ronnie Larsen’s Come Out Come Out! at the Foundry is continuing its run only through this weekend. Lake Worth Playhouse is presenting the closing weekend of Witness for the Prosecution.

The timing of the crisis could not have been worse: Eight theaters in the tri-county area had scheduled openings from Thursday to Sunday with several more slated the following two weeks as theaters try to reach the last of the snowbird crowd. Cancellations can be critical for smaller companies because, historically in the region, some theaters with thin cash flows only have been able to pay for the cost of the next production with the receipts from the current one. But box offices have reported many ticket holders asking for refunds.

In some cases, theaters are offering refunds (some are not, especially to national tours), others are offering to exchange tickets for a later production in the schedule, still others are asking arts-supporting patrons to simply “donate” the cost of the ticket by passing on a refund and claiming a tax-deduction.

In many cases, theaters say they are hoping to resume production of the shows in April, May, during the summer doldrums or even next fall.

The Carbonell Awards gala, nicknamed ‘theater prom’, was to be held for the first time at the Lauderhill Performing Arts Center on April 6, but the city has shut down the venue through the end of April, the organization has reported.

Juggerknot Theatre Company‘s Miami Motel Stories and Pigs Do Fly‘s Helen On Wheels in Fort Lauderdale are also shutting down with a plan to reopen in October. The Come From Away national tour slated for the Kravis Center and Broward Center was put on hold Friday. ACT of Davie is postponing its opening of  Always A Bridesmaid, as is To Fall In Love at Theatre Lab on FAU’s Boca campus. In some cases, closures are due to the city-owned venues being shut down such as Measure for Measure Production‘s musical Island Song at the Sunrise Civic Center,and Chasing Jack at Sand Creek Theatre in Boca Raton.

The Maltz Jupiter Theatre decided late Friday afternoon to postpone How To Succeed In Business Without Really Trying slated to open next week. The staff is considering if they can reschedule it for the early part of next season in the fall.

Miami New Drama planned to hold its Thursday and Friday previews of A Wonderful World, but cancelled all other performances going forward including its gala opening night Saturday because the City of Miami Beach had closed its venue.

The theater hopes, in the best case scenario, to move the production and its next drama The Great Leap to later in the year, said Managing Director Nick Richberg. But whether A Wonderful World  opens locally at a later date depends on the ability to renegotiate with artists, investors and vendors, he said.

The city’s website stated late Thursday that it was closing “until further notice” the Colony Theatre on Lincoln Road where Miami New Drama operates, the Fillmore Miami Beach at Jackie Gleason and the Jewish Museum of Florida.

Juggerknot Theatre’s immersive Miami Motel Stories, whose run had been extended until the end of the month, is closing after Friday’s performance.

The rest of Pigs Do Fly’s Helen On Wheels run has been cancelled, but may be reopened in October at the Empire Theater in Fort Lauderdale.

City of Miami officials have shut down some events already such as the Miami Youth Fair and Miami Open, but no decision has been made about cultural events such as those at the county-operated Arsht Center, Miami-Dade County Auditorium and South Miami-Dade Cultural Arts Center, said Marialaura Leslie, deputy director of the Miami-Dade County Department of Cultural Affairs.

But it’s a fluid situation across the region. “It’s unfolding minute-by-minute. There are no cultural closures right now but we are keeping an eye on it (as a) policy decision,” she said about 4 p.m. Thursday. Some events have been cancelled because the featured artists are unable to reach the region. Some of the county facilities are recording ticket cancellations.

That includes the current run of the national tour of Mean Girls.

At the Kravis Center in West Palm Beach, Judith Mitchell, chief executive officer, wrote, “Our top priority as always is the health and safety of all those who visit the Kravis Center, our staff, volunteers and artists, and in this spirit we have made this important decision.”

“While we have had a number of cancellations by artists, we have notified those that are still scheduled to perform during the closure period. We also are diligently working to reschedule suspended performances and hope to eventually announce new dates,” she adds. “Going forward, we will continue to carefully monitor and reevaluate the situation as we get closer to March 30,” Mitchell wrote.

Miami New Drama’s Louis Armstrong epic-scaled bio-musical was the most expansive the company had attempted, cost about $1.5 million when their normal show costs about $300,000. Much of the added funding came from outside investors hoping the show would travel to Broadway. The show had been in previews since March 5, but the government order scuttled its Saturday grand opening and the rest of the run.

On Facebook post and an email, the theater posted, “All tickets for postponed performances will be honored once performances resume. For any questions please contact the boxoffice@miaminewdrama.org or 305-674-1040. If you don’t think you will be able to attend at a later date and would like to donate your tickets to help support Miami New Drama at this difficult time, please notify the box office. ”

Artistic Director Michel Hausmann wrote on Facebook: ” It’s a tough day for us at the theatre, but we are a resilient bunch and soon enough our doors will be open again.”

Other venues were extremely committed to staying vigilant, but hanging on to their schedules for the moment, such as the Wick, Lake Worth Playhouse and Island City Stage in Wilton Manors. The latter currently plans to keep on schedule but acknowledging community concerns, an email stated, “We continue to offer free/flexible ticket exchange in the spirit of maintaining health and wellness in our community.”.

Some theaters like Palm Beach Dramaworks are watching closely but still have a few weeks before they open. In an email to patrons slated for Friday, the company stated, “At Palm Beach Dramaworks your health and safety are very important to us. Even though we don’t have any scheduled performances for a few more weeks we wanted to keep you informed of our current thoughts during this fast moving situation.

“Like most other organizations, we are closely monitoring reports and advice from city, state, and CDC regulators.  We are taking all of the necessary precautions to sanitize and provide a safe environment at the theatre, to protect you, our staff and visiting artists.

“Since our first scheduled performance for The Light in the Piazza is not until April 1st, at present we are continuing to prepare to open the show on that day.  If we are mandated to close or postpone any performances, you will be notified immediately and provided with box office instructions.”

But in New York City, all Broadway theaters closed at 5 p.m. Thursday through April 12. A part-time usher at two theaters was diagnosed to have the virus. Governor Andrew Cuomo announced in a press conference that no gatherings of more than 500 people will be allowed, excepting schools, hospitals, mass transit, and nursing homes. For gatherings under 500, the seating capacity will be cut in half.

Florida Theater On Stage will try to keep patrons and artists aware of schedule changes immediately through Facebook, Twitter and, to a degree, on the website