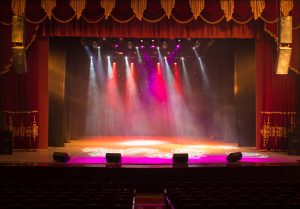 The leaders of Primal Forces, the seven-year-old peripatetic company that has performed mostly in intimate spaces in Broward and Palm Beach counties, have been quietly biding their time during the pandemic, especially since its performing space would not be a practical home for social distancing.

But now, as conditions ease, the theater is reorganizing under a new name as Boca Stage with a four-show schedule planned to begin in November.

Under artistic director and producer Keith Garsson, Primal Forces developed a reputation for modestly-mounted productions featuring strong performances and skilled direction elevating many intriguing scripts new to most theatergoers such as Sunset Baby, Breadcrumbs, Having Our Say and Blonde Poison.

The company was an offshoot of the Boca Raton Theatre Guild, but moved on its own to several venues across the region until settling in its current home at the Sol Theater at 3333 N. Federal Highway in Boca.

The theater promises that previously purchased tickets for the part of the season shut down by the pandemic will be honored, including the show that was supposed to close the season and will now open the new one, Warrior Class.

Details for the entire season are available at www.bocastage.net. If you have tickets already, pick your dates, visit the website and email the dates to
support@bocastage.net with your name and phone number.

The theater is planning a thank you gala for new and current subscribers at 7 p.m. Monday, Nov 8 at the Pavilion Grille in Boca Raton in conjunction with Stepping Out Florida. The gala will be free for all vaccinated subscribers. If you wish to attend, email a picture of your proof of vaccination to: support@bocastage.net. Include your name, phone number and the number of subscribers who will be attending.

Wasserstein’s life and career will be examined at 7:30 p.m. on Wednesday, July 14; Wilson will be at the center of a program at 7:30 p.m. on Wednesday, August 4. The presentations by Mark Perlberg, executive producer of the series, will include scenes from Wasserstein’s and Wilson’s plays read by professional actors. There will be a Q&A via Zoom at the conclusion of each program. Tickets are free, but reservations are required. To reserve tickets, visit www.palmbeachdramaworks.org or call the box office at 561.514.4042, x2.

In such works as Uncommon Women and Others, Isn’t It Romantic, The Heidi Chronicles and The Sisters Rosensweig, Wasserstein, with great wit, humor, insight, and compassion, explored the dreams, the challenges, and the obstacles faced by women seeking to forge rich personal and professional lives. Wilson, who chose the blues as his aesthetic, was a lyric poet and consummate storyteller, whose monumental achievement was the Century Cycle, 10 plays that chronicle Black America in a different decade of the 20th Century, including Ma Rainey’s Black Bottom, Fences, The Piano Lesson, Seven Guitars, Joe Turner’s Come and Gone and Two Trains Running.

Many who saw In The Heights film recently adored it, but admitted that they loved it even more when they saw it on stage in New York, the national road company or local productions such as the one Actors’ Playhouse.

You can get a chance to test their observation next month when two new locally-based producing organizations will mount the show at the Arsht Center in Miami July 23-24.

Loxen Productions, in association with Loud and Live, which have produced a version with modest production values (as seen in photos on their corporate website), also has produced The 25th Annual Putnam County Spelling Bee with local talent.

Tickets are available at arshtcenter.org.

Theatre Lab, the professional resident company based at Florida Atlantic University, is mounting two free in-person readings on June 27 of newly-commissioned audio plays by local playwrights. They focus on stories inspired by events in LGBTQ history under the company’s 2021 Fair Play Initiative.

Reservations are needed by contacting https://www.fau.edu/artsandletters/theatre. Only 70 people are allowed per reading. Masks are recommended. A confirmation email will be sent to confirm your ticket(s). Please allow a few business days to receive confirmation.

–At 2 p.m., Blood Sisters by Andie Arthur. (This productions is sold out). “Cindy is barely out of the closet ‐‐ even to herself. She tells herself that maybe, just maybe, if she tries hard enough, she will be able to find a man she can love. Jaq is a “self‐proclaimed man‐hating dyke.” She swore off dealing with men years ago. Even gay men are beneficiaries of the patriarchy and act like it. It’s 1981. An unexpected epidemic is hitting the gay community and while fear abounds, the government is doing nothing to help. Fear abounds, doctors are refusing to see patients, and there are major blood shortages ‐‐ can Cindy and Jaq overcome their antipathy to work together to help those in need and through helping those in need help themselves?”

—At 4:30 p.m. by Versace Era by Juan C. Sanchez (tickets available). “Set in Gay life in the 1990s in South Beach. It was a golden time: extravagant parties, glamour, and celebrities and became known as the Versace Era, from when the famous and beloved designer took residence at Casa Casuarina in 1992. His death symbolized the end of those golden days — and the end of refuge — for many South Beach residents. Set in 1997 in a fictional cafe on Ocean Drive, the play follows the lives of several restaurant employees and guests as they come together to mourn the designer’s tragic end and confront what it means to them and their community. As they work, eat, drink and mourn, their personal stories, interactions and conversations reveal a picture of resilience, celebration, pride, communion and unity.”