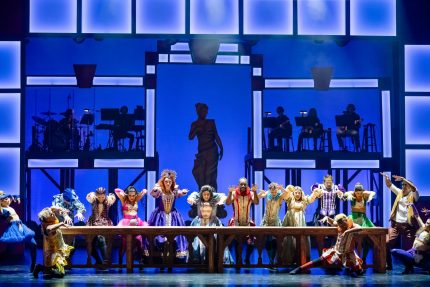 In the charming, big-hearted Broadway musical, Head Over Heels, the King of Arcadia and his viceroy, Dametas, wonder aloud whether the kingdom’s Oracle is a man or woman.

“How is gender germane to the discussion?” the Oracle named Pythio asks.

“Things need to be one thing or another,” demands the closed-minded king.

“My qualities transcend your rude opinion!” counters Pythio, who adds, “Pythio is a nonbinary plural.”

And in Slow Burn Theatre Company’s visually striking, lively, and credible production of Head Over Heels, Pythio emphasizes “trans” in “transcend.” It is a wise decision on director Patrick Fitzwater’s part, considering Pythio’s sexual identity. And the emphasis on “trans” adds humor to the proceedings.

Certainly, it is fitting that the professional, nonprofit, Ft. Lauderdale-based Slow Burn Theatre Company is mounting a production of the often-amusing Head Over Heels in June. After all, it is LGBTQ Pride Month.

Slow Burn’s production of the musical using the catalogue of The Go-Gos, runs through June 26 in Broward Center for the Performing Arts’ 584-seat Amaturo Theater. There, Clifford Spulock’s lighting design explodes with splashes of color. The multi-colored lighting is appropriate; it suggests diversity.

Undoubtedly, Head Over Heels is a musical about embracing change and diversity. For instance, in addition to Pythio (they/them/theirs), the show includes a female romantic couple.

While the Kingdom of Arcadia may be diverse at the end of the show, that was not always the case. Specifically, when the musical opens, King Basilius clings to tradition as the golden rule. Also, a mysterious “Beat” governs the lives of Arcadia’s residents. However, a series of prophesies from Pythio threaten to upend the status quo. And, so, the royal family tries to save their beloved kingdom from extinction. But, the key to Arcadia’s survival might lie closer than they think.

Head Over Heels is a jukebox musical that adapts the plot of The Countess of Pembroke’s Arcadia, a 16th-century prose romance by Sir Philip Sidney. The roughly two-hour, 15-minute musical ran on Broadway from June 23, 2018-Jan. 6, 2019 at the Hudson Theatre. The show’s award nominations included “Outstanding New Broadway Musical” and “Outstanding Book of a Musical.”

In addition to James Magruder’s unpredictable, upbeat, and humorous book (Jeff Whitty of Avenue Q penned the original libretto), Head Over Heels features pre-existing songs from the catalog of The Go-Gos. The group’s genres include new wave, power pop, pop rock, and punk rock. Many consider them the most successful all-female rock band of all time.

While the songs in Head Over Heels are not particularly memorable, some of the numbers, especially “We Got the Beat” are rousing. And the lyrics help to advance the plot.

Although nobody specifies a setting, it is safe to assume that the show takes place during the Elizabethan age. Indeed, the musical sounds and looks like a Shakespearean comedy, with a happy ending, at least one disguise, jealous lovers, and the characters speaking in the English of the Bard’s time. Therefore, in order to follow the tale, it helps to be familiar with the plot. Synopses are available online.

Fortunately, under Fitzwater’s direction, the show moves at a pace that all should be able to follow. Also, during appropriate times, Fitzwater has performers stand on platforms to highlight their characters. For the most part, the direction is invisible – which means that Fitzwater has succeeded in his job.

Meanwhile, Robert Koutras lends King Basilius a hot-headed temperament without turning him into a despot, which he is not. You get the sense that this royal man is used to getting his way without much trouble. Through Koutras’s performance, we sense the king’s irritation that change may be on the way. After all, he blindly believes that under his masculine rule, Arcadia is doing great.

As Basilius’s wife, Queen Gynecia, Sabrina Lynn Gore imbues the character with wisdom and an assertiveness that makes Gynecia a woman ahead of her time. Gore’s Gynecia also possesses a playful spirit and carries a graceful air.

Clearly, although they are sisters, Pamela (the older daughter) and Philoclea are different. And the performers who play the parts make us see this difference.
Joline Mujica’s Pamela is willful, self-dramatizing, and stuck up. Clearly, she is pampered. By contrast, Kristi Rose Mills’ Philoclea is quieter and less self-assured. Yet, she is dreamy and hopeful, especially when she thinks about her love, Musidorus.

Speaking of him, Nate Promkul injects the character with an endearing awkwardness, innocence, sincerity, and devotion.

Devoted is an apt term to describe the king’s viceroy, Dametas. And Matthew W. Korinko injects the character with positive traits such as loyalty and gentleness.
Dametas has a daughter named Mopsa, who also happens to be Pamela’s loyal handmaiden and lover. As Mopsa, Reanne Acasio exudes wisdom, warmth and faithfulness, all qualities that one may want in a friend or spouse.

The actors prove to be triple threats. They not only sing well, with clear and strong voices, but convincingly express the emotions behind the lyrics. The cast also skillfully executes Shannon Mullen’s high-octane choreography, while dancing as a unit. In addition, cast members speak Elizabethan English clearly and without stumbling, and convey the emotions behind the words.

Behind the scenes, scenic designer Cliff Price has designed a minimal set. Mostly, it includes trees and square-shaped screens through which most of the lighting appears to shine through. When necessary, set pieces that stand for different locations roll on and off the stage. Lenora Nikitin’s costumes are period-specific, appealing, and the performers move with ease while wearing them.

Head Over Heels carries a positive message about inclusivity that everyone sorely needs to hear during this time of division. Also, the piece, like any good Shakespearean comedy or romantic comedy, leaves audiences feeling invigorated. Certainly, this musical offers a refreshing respite from the dire news of the day. With this production, Slow Burn concludes the current season, and looks ahead to the 2022-23 season.

Slow Burn Theatre Company’s production of Head Over Heels runs through June 26 in the Broward Center for the Performing Arts’ Amaturo Theater, 201 SW Fifth Ave. in Ft. Lauderdale. For showtimes and tickets, go to https://www.browardcenter.org/events/detail/slow-burn-theatre-co-head-over-heels. Also, information about Slow Burn’s next season is listed at https://www.browardcenter.org/subscriptions/2022-2023-slow-burn-theatre-company-season. 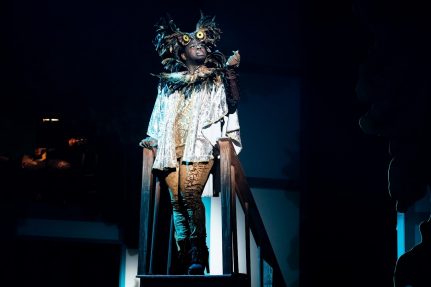