Slow Burn’s Urinetown Will Make You Laugh ‘Til You… Well… 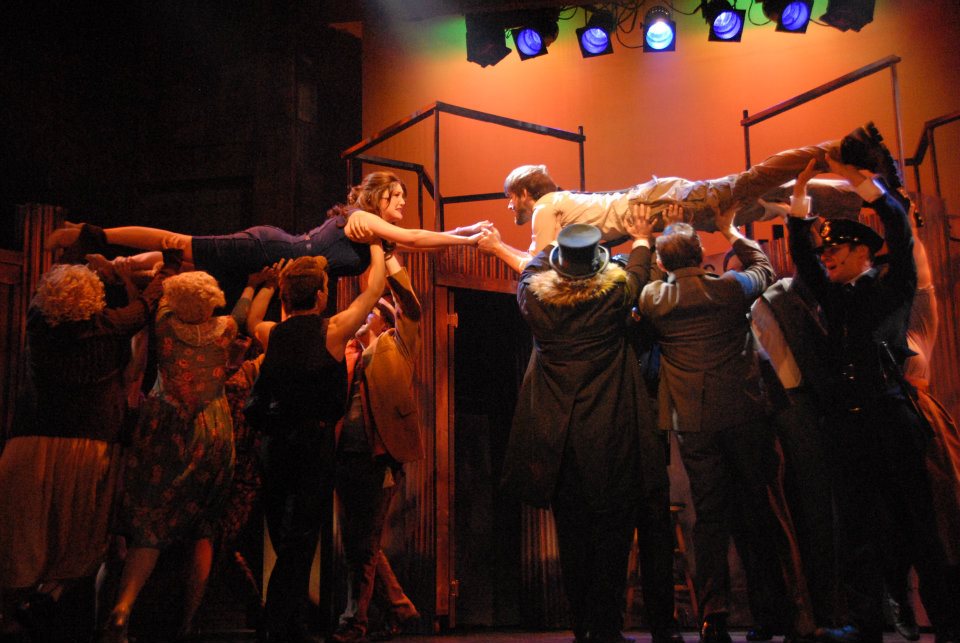 One pleasure in seeing so much theater over time is savoring how fledgling companies strengthen and mature.

Slow Burn Theatre’s production of Urinetown the Musical marks another milestone in the young troupe’s evolution as a reliable purveyor of edgy, offbeat musical theater that few other mainstream companies have the courage to produce.

The aggressively irreverent satire about an ecologically-crippled dystopia is a perfect fit for this company that defies conventional wisdom that young people aren’t interested in theater and that you can’t perform in a high school theater so far in southwest Palm Beach County that you expect to see ‘gators in the audience.

Slow Burn also is not afraid to attempt works that may be just a shade beyond their abilities and budget. But their bravery and their aspirations are so laudable (and their work so damn entertaining) that they have indubitably earned a loyal audience willing to cut them a smidgen of slack as they improve show after show after show.

Urinetown qualifies as perhaps their strongest overall production with a corps of strong voices delivering production numbers with verve, witty performers who know how to put across deadpan comic lines, solid musical direction by Manny Schvartzman, and above all, inventive staging and choreography by Slow Burn co-founder Patrick Fitzwater. There’s always a jerry-rigged feel to Slow Burn shows, as if they could use another thousand dollars in the budget, but that is a quality appropriate for this show about a world holding together with spit and baling wire.

Urinetown is a deliciously silly and outrageous satire with tongue sticking through the cheek, modeled upon and mocking those dark musicals of social commentary by some combination of Bertolt Brecht, Kurt Weill and/or Marc Blitzstein. It’s a meta-musical that endlessly lampoons theatrical conventions such as having one character warn another early on not to lay on too much backstory. “Nothing can kill a show like too much exposition,” he says.

The premise is that decades of waste has led to Draconian rationing; the venal Caldwell B. Cladwell’s corrupt mega-corporation controls the water supply and is charging the citizenry to use the bathroom, or as one song, says, “It’s a privilege to pee.”
Those who violate the mandates are taken to “Urinetown” and never heard from again. Bobby Strong, one of the minders of the public pay urinal leads a revolution – after falling in love with Cladwell’s naïve daughter Hope. Obviously, this 2001 script has a serendipitous echo of 2011’s class warfare between the One Percenters and the Occupy Wall Street Movement.

Greg Kotis and Mark Hollmann’s savage and subversive score, lyrics and book are brimming with lines like the magnate admonishing his daughter, “Did I send you to the Most Expensive University in the World to feel conflicted, or to learn how to manipulate great masses of people?” The script is crammed with intentionally sophomoric double-entendres, puns referencing a call of nature, and copious malapropped clichés.

Fitzwater adroitly underscores the humor as well as finds imaginative staging ideas such as emphasizing the hip hop feel to a duet by two sadistic police officers or having two characters lifted over the cast’s heads in a Busby Berkeley pinwheel. He’s added daffy homages to iconic Broadway scenes such as the finger snapping gangs of West Side Story, “A New Argentina” from Evita, and the folk dances from Fiddler on the Roof. When the people revolt, among the signs they carry is the famous solarized Obama poster made up to look like Bobby. 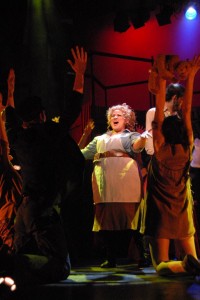 Slow Burn also has a talent for finding talent we’ve never heard of but will make a point of watching for in the future. The find in this show is Cindy Pearce as the pee palace proprietor Penelope Pennywise , a short and stout dynamo with a clarion Merman-like singing voice and a Mae West swagger. The way she snaps out the name, Bobby (Bahb-bay), at every opportunity with an exaggerated topspin is hilarious in and of itself.

But the cast is filled with solid performers: Daniel Schwab as the hero who does a mean gospel roof-raiser, Run Freedom Run; Slow Burn co-founder Matthew Korinko as the droll narrator Officer Lockstock; Larry Buzzeo who graduates from Slow Burn’s flamboyant Dr. Frank N. Furter to the stylishly smooth Cladwell (although his voice sounded a bit worn); Nova Southeastern University student Jaimie Kautzmann in the linchpin role of an obviously grown up “Little” Sally; and Slow Burn vet Lindsey Forgey as the slightly naïve but ever earnest heroine Hope.

Ian T. Almeida’s set evokes an urbanscape where all the corrugated metal has rusted. It’s well lit by Lance Blank and the sound by Traci Almeida is pretty impressive given that Slow Burn performs in  West Boca Community High School’s auditorium. The costumes by Rick Pena are wonderfully raggedy as if he raided several thrift stores, which perhaps he did.

Our apologies for the crush of reviews making this one so late. There is only one more weekend to catch the show and we recommend you do.

A side note: Slow Burn has announced the titles if not the exact dates for its upcoming season and it speaks to their ambition and commitment: Avenue Q, the adult satirical musical notable for a sex scene between puppets; Side Show, the moving cult musical about real-life sisters who were Siamese twins written by the authors of Dreamgirls; Stephen Sondheim’s masterpiece Sweeney Todd, following last season’s Sondheim show Assassins and this April’s plan for Into the Woods; and finally, the dopey hoot The Wedding Singer. 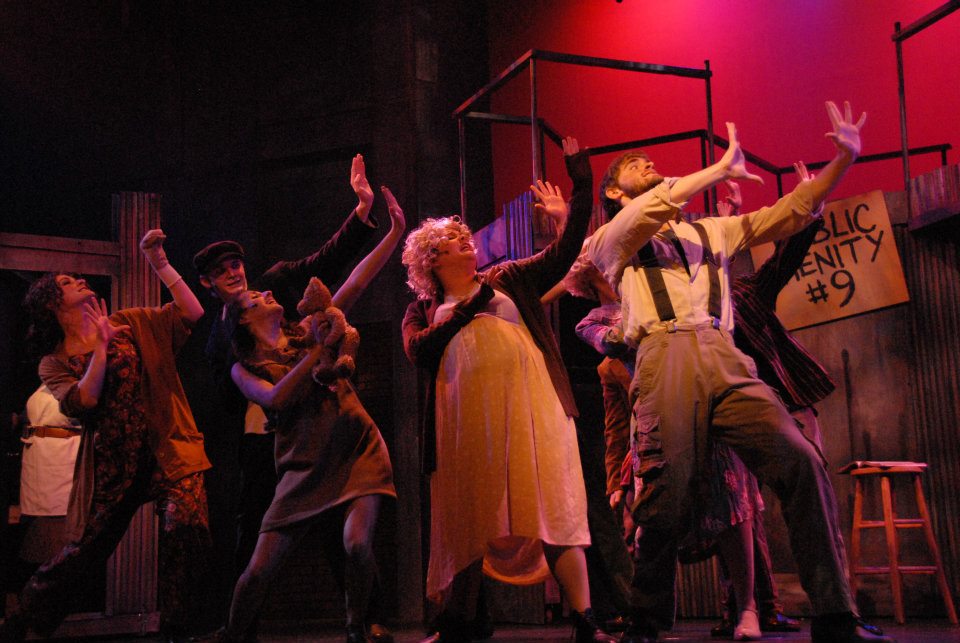