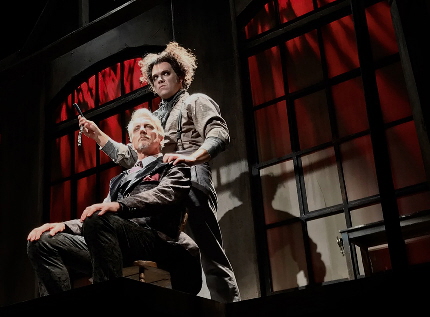 Monsters are made not born.

Certainly, homicidal rage against a corrupt world erupts and spews out over the stage and into the audience in Palm Beach Dramaworks’ vision of Sweeney Todd.

But director Clive Cholerton’s singular spin is that the serial throat-slitting barber does not start the evening as a vengeance-obsessed fiend. He has guided Shane Tanner through an arc from an emotionally cauterized victim of injustice through the aforementioned rage and finally settling into an internally-logical mechanism for coping with the abyss of an infinitely monstrous realm.

That approach may be disconcerting in its unfamiliarity for lovers of the Sondheim-Wheeler masterpiece. But it adds a dimension of, not forgiveness, but compassion to this oft-revived cross between gleeful Grand Guignol and merciless condemnation of socio-economic inequity.

You can see Tanner’s Sweeney evolving from stage to stage in one of the finest performances of his local career, which takes full advantage of his acting chops as well as that sonorous baritone sinking into emotional depths he has not had a chance to display earlier as Jud Fry or Bill Sykes.

With molding by musical director Manny Schvartzman, Tanner’s voice can roar like an uncaged beast, but his Sweeney is even more chilling when it drops in volume to intense almost caressing menace as he serenades his razors in anticipation of a congress their manufacturer never imagined.

The raw material of Sweeney from Stephen Sondheim’s masterful score to Hugh Wheeler’s brilliant script is, of course, legendary. But what Cholerton, Schvartzman, their creative team and a full-throated cast have brought to it results in one of the most accomplished works in Dramaworks’ summer musical series and easily among the best musicals of this season anywhere.

The production occasionally betrays signs of South Florida’s economically-dictated but sadistically short rehearsal time, especially in those group numbers that get a bit more muddled than the creators intended. But that will work itself out with a few days’ performance.

Like the vision of original director-producer Harold Prince (a part-time Miami Beach resident), this Sweeney is firmly set in the morally murky Industrial Revolution with a bit of a steampunk vibe courtesy of the costuming by Brian O’Keefe.  Where Sondheim and Wheeler saw Sweeney as a black comedy, Prince staged it to resonate with the darkness, oppression and anarchy of 1979 and Cholerton seems to see the same more than a quarter-century later. In today’s world of mall shootings and implacable terrorists, there is an upsetting resonance to the lyrics, “Sweeney hears music that nobody hears..:. Perhaps today you gave a nod / To Sweeney Todd.”

The plot, for those more familiar with Oklahoma or Mamma Mia, is rooted in a 19th Century urban legend about British barber Benjamin Barker, falsely convicted by Judge Turpin who lusted after Barker’s wife. Years after being imprisoned in Australia, Barker returns to London under the alias Sweeney Todd during the upheaval of the Industrial Revolution. He is told his wife took poison after being raped by the judge and that his nearly-grown daughter now is in the judge’s clutches. The story follows his bloody revenge in which throat-sliced victims are turned into meat pies sold by Mrs. Lovett, a daft baker who has a crush on Todd.

Cholerton’s deft skill and attention to detail is invisible to most audience members, but he invests considerable imagination in restaging works with limited resources such as last year’s triple-cast 1776. As with that production, he bookends the script with a framing device, in this case a depiction of the brutal oppression of the period. More indicative, though, is a brilliant coup de theater we will not spoil here in which he stages Sweeney’s death in the most psychologically perfect stroke we have seen in six-plus previous productions. And where the John Doyle staging in 2004 also used a small cast, Cholerton makes his troupe active participants as a community of perpetual observers who hand razors and other props to whomever is performing at the moment.

Schvartzman tweaked the epic-sized orchestrations to require only five musicians.  The hard work succeeds, although those raised on the original cast album may find it a bit thin. But that is usually overshadowed by many of the rich powerful voices that he and Chorelton have hired and shaped such as the brassy clarion instrument wielded by Ruthie Stephens as Mrs. Lovett.

Stephens, who played the cuckolded Charlotte in Dramaworks’ A Little Night Music in 2015, is a marvel of comic instincts underpinned by an ability to put across this enabling murderer who long ago accepted amorally unrestrained pragmatism as the only sane tactic for surviving this cesspool of a life. While most of the cast enunciates Sondheim’s lyrics clearly much of the time (except when the cacophony is intentional), Stephens seems to effortlessly roll out the tongue twisters in “The Worst Pies In London.”  She gives an extra fillip to the last word in some lyric lines such as “And I’m telling you them pussy cats is quick.”

She and Tanner have as much chemistry as these disconnected characters can have as the two exercise their nimble wit in the joyful macabre “A Little Priest.”

Just a quick return to Tanner whose warm gentle real life persona makes his transformation here so impressive shuttling between volcanic explosions and intense brooding with sunken eyes under a Frankenstein brow. In this different interpretation in which you can chart his descent into madness, when Sweeney commits his first murder, he seems surprised as if he can’t believe he was capable of it, dropping to the floor to wildly try to clean up the blood.

The cast list can boast so much more. Jim Ballard, often seen as a handsome leading man (albeit with a comic flair), slips easily into the venal, menacing oily but often ludicrous Beadle. Silver-throated Jennifer Molly Bell, a Dreyfoos and FSU grad as the virginal songbird Johanna, gives one of the most clearly understood rendition of the operatic “Green Finch and Linnet Bird” as you are likely to hear.”

The discovery here is Paul Louis Lessard, a ringer from out of town whose only local role in his bio is in the Maltz Jupiter Theater’s The Producers. But his delivery of the innocent Anthony Hope is like a beacon in the gloom. He invests his fair-haired hero with an enviable and pitiable purity of voice and the spirit of a young man untested by the realities of life.

Michael Amico once again illustrates his ability to create immersive environments full of telling details. His dingy two-level charnel house with bridges, block and tackle gear, windows obscured by grime, iron trestles, steam pipes leading who knows wear, all of it are as dark and ominous as the souls on display.

As always, this is heightened by the lighting of Donald Edmund Thomas. Very often, less adept companies snap on spotlights for no other reason than a leading actor begins to sing. But here, Thomas and Cholerton deftly and smoothly use spotlights to direct the audience’s attention – like laser pointers in the gloomy milieu.

Brad Pawlak’s sound design includes copious aural cues like the hiss and clank of a factory or the roll of an ocean. Some people will argue that the volume of the singers are too obviously miked, but that allows the performers to expressively drop their voices during a song.

O’Keefe’s wardrobe is breathtakingly detailed and imaginative from Sweeney’s butcher’s apron to the motley socks Tobias wears to the Beadle’s bowler hat with leather and stud hatband stolen from a death metal quartet.

Many people love this musical so much that they have a bit of anxiety whether to pollute their fond memories with another production. There is no need for concern here, just cause for joyful anticipation.

A preview feature on the production can be found by clicking here.