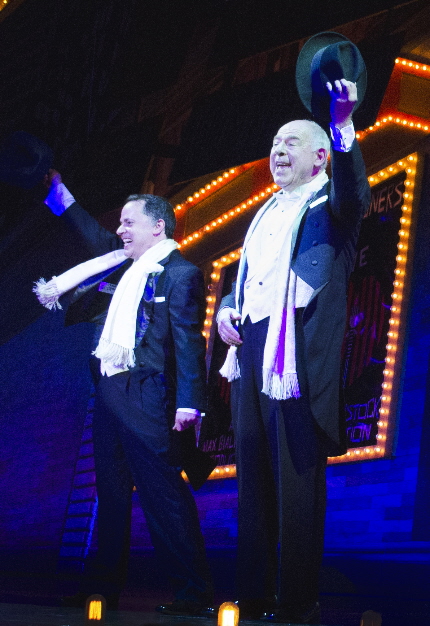 Who in his right mind would try to remount a production of the Broadway smash hit The Producers?

Frequent theatergoers have seen it several times. Any fresh spin would violate a fond memory of the original. Who could equal the landmark performances of Nathan Lane and Matthew Broderick? And the dirty secret is that it’s a deceptively difficult show to excel at, requiring a rarely-found confluence of God-given charisma and hard-won skill. Few people talk about the lackluster editions they wish they hadn’t seen, especially compared to the original. Even the 2005 movie was a flop.

Who in their right minds would do it? The Maltz Jupiter Theatre, and thank the theater gods they did.

Every cherished bit that creator Mel Brooks and director Susan Stroman invented in 2001 is there to relish again — from the old ladies dancing with their walkers to Brooks’ famously dubbed line in “Springtime For Hitler” to Hitler sitting on the edge of the apron crooning to the audience like Garland at the Palace.

But director Mark Martino, choreographer Shea Sullivan, musical director Michael Larsen and a cast of zanies have injected a different vibe that makes the show their own, just as valid and just as hilarious. The heroes are less leeringly larcenous (which does rob the show of a bit of its anarchical ethos) but they are easier to embrace.

Above all, this is one of most joyously over-the-top energetic rendition ever mounted, spotlighting more physical comedy than you’ve seen in some time (unless you saw Matt Loehr last month in Me and My Girl, and here it’s everyone in the cast).

Just one example is Mark Price as the nebbishy accountant Leo Bloom. Leo’s legs never obey him: they frequently bow inward at the knees, and his ankles often get tangled up in themselves. His question mark hunched shoulders and deer-in-the-headlights expression in the early scenes give way to an assured if imagined savoir faire in his dream vaudeville dance in “I Want To Be A Producer.”

The other key asset is a carbon arc searchlight’s worth of intensity and energy pervading the show from the blindingly bright overture to the hallelujah finales of both acts. In scene after scene, production number after production number and especially the introduction of character after character, the meld of freshness and the familiarity just never stop. For instance, the krazy Kraut playwright Franz Liebkind is played here, not by some average looking schlub, but by Roland Rusinek who gives us a hefty beady/bug-eyed fruitcake who hasn’t shaved in two weeks, a mountain of a nutball dressed in liederhosen and a Prussian spiked helmet. Add in his booming baritone bass more likely found in opera and Franz is a unique creation.

All of which is putting off the linchpin issue: Can Lenny Wolpe, the veteran stage and television actor whose name you don’t know but whose face you do, create his own Max Bialystock, the perennial failed Broadway producer made famous by indelible performances by Lane on Broadway and Zero Mostel in Brooks’ 1967 film? Can Price erase memories of equally stature by Broderick and Gene Wilder?

Amazingly, the answer is yes. Other than the cadences required by Brooks’ sitcom-honed humor, neither actor echoes a shred of their predecessors. This is crucial because very few of Lane and Broderick’s replacements on Broadway or the road ever came close to creating that alchemical magic that no can explain.

Wolpe, notable for his Kilroy-was-here mensch of a face and strong voice, never flags in his enthusiastic implementation of every comedy trope he’s learned over the decades. For Wolpe, Max’s primary trait and virtue is his undeterred resilience despite every rational reason to doubt a resurrection. That makes Max an admirable and loveable clown, even a victim who never acknowledges defeat. What is missing (and this is a mixed blessing) is that slight whiff of sleaze that Lane and Mostel exuded. They knew they were crooked but saw the con as a justifiable survival technique. That gave the film and the musical that last twist of nose thumbing at society that was at the heart of the work – and it’s absent here. But Wolpe’s delivery of the Danny Kaye-class patter songs is not just funny, but every word is discernable.

Price, who played Carmen Ghia a few months ago at the Papermill Playhouse in New Jersey, is a wonderfully hangdog buttoned-down introvert who grows in stature. Unlike Broderick and some other predecessors, Price can genuinely sing and dance, offering a no-excuses exhibition including Astaire-like gliding duets with Ulla and tap dances with the ensemble. He, too, is missing that sub rosa smirky Ferris Bueller slyness that Broderick brought to the role (and which was actually wrong for the part).

The two do have some chemistry, if not the preternatural magic that Lane and Broderick had. It helps that Wolpe is at least a head or so taller than Price making for the classic image of a vaudeville comedy duo. When they embrace, the height difference is inherently funny.

The supporting cast and ensemble is equally outstanding, including the sexy tall Elyse Collier as Ulla whose dances with Leo often find his head near her bosom; the aforementioned Rusinek who you won’t recognize as the cultured suspect in last season’s The Mousetrap; Seth Tucker as the funniest Carmen Ghia we’ve seen; and last but not least Michael Brian Dunn who whether playing the outlandish director Roger Debris or Roger as Hitler is delightfully chewing every shred of scenery not nailed down.

We won’t bother reviewing the plot, but if it’s been a while since you’ve seen it, remember there is copious blue language, lust-drenched bits including frequent crotch shots, an affectionate sendup of every gay stereotype in the jokebook and, of course, a merciless lampoon of Hitler’s Naziism, which even now seems to burst through boundaries of good taste as if they don’t exist. Martino and company have relished all of it and added an extra ladle or two of topspin. For instance, Tucker’s Carmen Ghia demonstrates an unexpurgated encyclopedia of gay-inspired physical gestures and poses.

Brooks’ script stands up as if it was written yesterday. It’s a special treat for theater lovers who can pick out scores of inside jokes and Easter eggs, from quoting A Chorus Line’s opening notes before the Hitler auditions to having the director’s lighting designer being the butchest lesbian ever seen on stage.

Martino, who helmed the Maltz’s outstanding Les Misérables, and his frequent collaborator Sullivan, inject scores, probably hundreds of their own bits of comedy throughout.

A quick nod to conductor Larsen who not only melded the voices but who re-orchestrated the score originally written for 22 musicians so that it could be played by nine fine musicians – and still retain the bright, brassy showbiz pizzazz that powers the entire evening.

As always, the Maltz’s creative and technical team is peerless. While many of the design elements echo those of the original production, they are flawlessly executed. You have to love how the old ladies (played by an inspired male and female ensemble) are wearing crimson underpants that they flash at several opportunities.

The evening-long trumpet fanfare to comedy is a genuine out of the ballpark homerun. The tragedy is that the run cannot be extended because the pay Disgraced opens two weeks after The Producers closes, and 94 percent of all tickets in the run have already been sold. Word of mouth and reviews will erase any outstanding tickets quickly.

To read a feature on the production, click here . 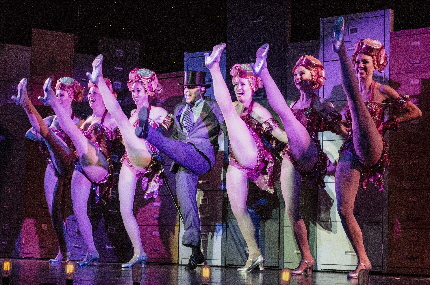