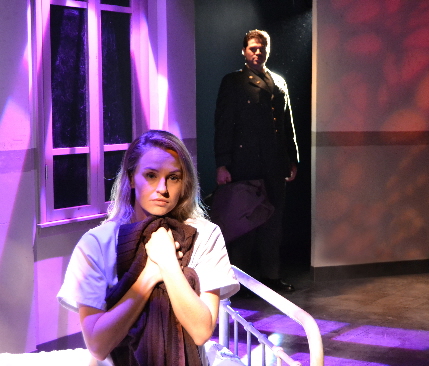 Once upon a time, this is how a play was born:

A playwright would toy with an idea a couple of months, start writing a script, hear it spoken by friends in his living room, rewrite it a couple of times, find a producer who would make suggestions. It would be rehearsed a few weeks, then play a week or so in New Haven or Boston, then undergo a touch-ups or even an overhaul. And then, maybe a year after the idea surfaced, Death of a Salesman or The Glass Menagerie would open on Broadway polished and fully-grown.

Today it’s much different, as playwright Jennifer Faletto can attest as her fledgling Domestic Animals works its way through Palm Beach Dramaworks’ Dramaworkshop program – another stop inside the Byzantine maze known as 21st century play development.

Her imagistic, highly theatrical tale of a woman in a mental institution flashing back on her past has undergone multiple drafts, readings around a table just with actors and a director, readings in front of an audience, a minimal production at a fringe festival, each giving rise to more changes, all since first playing with the germ of the idea back in 2012.

But thanks to Dramaworks’ 2 1/2-year-old program to provide evolving works a “safe place” to develop in various stages (literal and metaphorical), Domestic Animals is about to get a fully-directed “developmental production” complete with sets, costumes, technical special effects and a cast that has the script memorized. The work will be produced in the theater’s new upstairs black box venue directed by veteran Margaret Ledford who has worked on the project since it first came to Dramaworks.

Having Ledford, Dramaworks’ staff  and some cast members’ involved for as much as two years, is a definite edge, Faletto said last week, because “everyone has been digesting” the evolving product rather than just getting acquainted with it.

No one expects this to be the finished script; Faletto already recognizes aspects she wants to fix, but they are facets that she might not have noticed unless she could hear the words coming out of actors’ mouths and be able to see the uninterrupted flow of the piece.

Her play has its roots in her childhood in Alaska, listening to her parents telling “these magical adventure stories” about her family dating back to the 1960s, such as her father’s time as a helicopter pilot in Vietnam. “They have always stayed with me,” said the 39-year-old Coloradoan.

So when she began writing plays, the stories seemed like a good jumping off point, although the family stories themselves don’t appear in the play directly. “But the magic and the mystery they (stimulated) are something I’ve always been intrigued by,” she said.

In 2012 she wrote a draft about a woman in a mental hospital in Alaska who is so lonely because her husband is out flying that she starts letting her imagination run loose.

“It was a terrible draft; it just established the characters,” she admitted. But a writing teacher asked her as an exercise to change locations. “By moving the hospital to the Midwest and having the woman’s imagination stray back to her Alaska experiences, “it kind of stuck.”

That second draft was sent off to Dramaworkshop’s open call which culled through 150 submissions in 2014. The program chose it for a table reading. 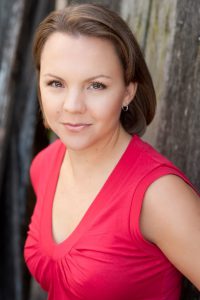 Early in the summer of 2015, the literary manager for Arena Stage in Washington, D.C., decided to direct a cut-down 70-minute version for the Capitol Fringe Festival that July. “But I thought it was too heavy,” she said. As with each stop along the way, she took it back into the shop for retooling.

Then, in August 2015, the work advanced to the next stage at Dramaworkshop as Ledford led a week of table readings and then mounted a workshop production.

Then after changing it even more, Faletto brought the new version into rehearsals early this year for more work guided by Ledford and with input from Dramaworkshop manager Jeremy Quinn.

She made small changes in terms of the text, but the most valuable aspect was “really seeing where the actors hit walls on transition and thoughts, saying ‘I do not know how get from here to there’ ” emotionally, she said.

Since returning to West Palm Beach this month, “I’ve sort of been able to move a few things around, but it’s painful because now I can see all the problems. I don’t like the flow of this scene. I can see where (the actors) struggle to come up with lines and thought transitions. It confirmed what I thought” about some concerns.

Still, the newest version will appear for 12 performances January 13-22 with actors Betsy Durkin, Alex Alvarez and Clay Cartland. The lights, scenery and props are crucial to see for the first time since memories, possible hallucinations and flights of fantasy must invade the heroine’s consciousness.

While everyone at Dramaworkshop wants the audience to have a satisfying experience, the assemblage knows this is just another step in the developmental process, although one far down the path. “We’re just getting to the point of asking did we get the story out and can (audiences) follow the journey,” Faletto said.

Fortunately, Ledford has developed new works at Florida Stage in Manalapan, writer Juan Sanchez’s works at The Promethean Theatre in Davie and The Trouble With Doug at The Theatre at Arts Garage in Delray Beach.

The difference here from simply bringing finished work to life is, Ledford said, “is that it’s absolutely fun” to be involved in helping create a work from scratch.  “We’ve been able to spend more time with the text. One of my roles in this process is to help Jen to get the strongest possible script. It’s not all about me facilitating what’s going to happen on stage in a week; it’s about me asking the right questions of her (like) is that what you meant?”

A director in this position is faced with two approaches, she said. “One way is to say to playwright, do you want to me to direct over your problems (to hide them from the audience), or do you want me to help you with the text?” The answer in this case was to spend the early stages on the latter and the recent days on the former.

Domestic Animals is one of several projects underway in the program. Fully-funded by patrons for five years, the program already has sponsored three staged readings, one workshop, a developmental production last year’s of Buried Cities, by Jennifer Fawcett and three workshops are planned for this year. All are different plays.

Many such national programs to develop new work programs have a hit and run feel: perhaps a few days rehearsal, perhaps one afternoon only. Jan McArt’s program in Boca is an exception providing a week’s rehearsal and rewrites. But Dramaworkshop sits writer, director and cast members down for two weeks at a crack in various outings spread over many months.

Fawcett wrote in a news release, “My time at The Dramaworkshop was very positive,” Fawcett says. “One of the biggest needs of a new work is time: time to write, time to workshop with actors and a director in a schedule that isn’t driven by production, and time to revise. The Dramaworkshop team not only showed great faith in my work but gave me this time, and the play is all the better for it.”

Dramaworkshop was envisioned by Producing Artistic Director William Hayes and Managing Director Sue Ellen Beryl as crucial facet in the company’s quest to become a nationally-recognized regional theater akin to Steppenwolf in Chicago or Arena Stage.

Development is a goal in itself, but Dramaworks does have another objective: finding new works to include in the company’s main stage schedule. Putting on world premieres is a new element for a company best known for mounting classical titles. But Hayes has two new works penciled in for the 2017-18 season because he, again, sees expanding the Dramaworks fare as helping the company grow into a major force in regional theater.

“It’s going to be a goal and an objective to try and put a world premiere on the stage every year but it’s not going to be a requirement because I have to use my artistic judgment when I think it’s ready,” Hayes said in an interview last summer.

“But that’s what 99 percent of the theaters in the country do, put at least one world premiere on its mainstage. So it’s not like I’m shaking things up or it’s a change; it’s always been the objective since we started as an organization to do this when we were ready. Because our mission is ‘intellectual theater to think about’ whether that’s a new work or a classic.”