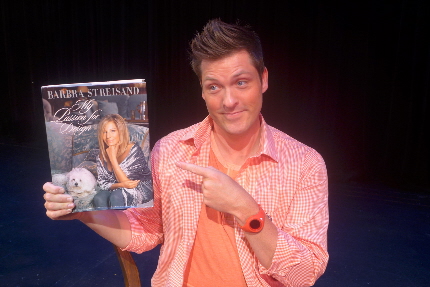 A serious message is gift-wrapped inside Buyer & Cellar about our complex symbiotic relationship with celebrities, but it is only the quiet anchor grounding Actors’ Playhouse’s overwhelmingly hilarious trip down Alice’s rabbit hole, or more precisely Barbra Streisand’s basement.

Chris Crawford delivers a comic tour de force as Alex Moore, an unemployed actor babysitting a mall that Streisand built under a barn at her Malibu compound. That last couple of phrases will be explained later.

Under David Arisco’s direction, the single-actor show is a marathon in which Alex only slows down two or three times. Otherwise, Alex/Crawford is running full out for 95 minutes, chattily narrating his experience drenched in witticisms like a latter day Oscar Wilde on speed, and depicting rapid-fire conversations with five other people including his boyfriend Barry and la Streisand herself. And he is almost always in motion, not just racing across the set but forever gesticulating with jazz hands flapping, floating and styling like trapped birds.

Crawford slips so easily into the role that you wonder if he’s acting, but compare his unabashedly gay Alex with his Carbonell-winning performance as the sexy hetero lover in Murder Ballad at Actors’ Playhouse and the regal prince Richard in Palm Beach Dramaworks’ The Lion In Winter.

Per the script which often refers to itself as a script during the evening, Crawford does not try to do an impersonation of Streisand. He shares, “Enough people do her — even some women — so you don’t need me to. When I tell you about the conversations we had — which never really took place — I’ll just be her, and you can fill in the rest.” Primarily, he throws up his hand flightily and draws the collar of his sweater vest across his face

Buyer & Cellar was a 2013 smash hit oft extended off-Broadway and in Los Angeles thanks to the uproarious script by Jonathan Tolins (Twilight of the Golds) and an acclaimed performance by Michael Urie. It was one of the few plays to earn a national tour.

To walk more slowly through the set up: Alex Moore is a struggling actor in Los Angeles on the cusp of giving up (he was fired from Disney Land while playing the mayor of Toontown) when he is hired to be the sole human being staffing a kind of underground mall that Streisand has built in the basement of a restored barn on the grounds of her palatial and extravagantly appointed Malibu estate.

The block contains an antiques shop, a clothing store stocked with all of her old costumes, a sweet shop, a doll shop and the like. While the play is total fiction, this place actually exists, as documented in Streisand’s coffee table book My Passion For Design.

Eventually, his sole customer, who initially calls herself “Sadie,” appears. He endears himself by offering to sell her an antique doll and improvising on the spot a hilarious backstory about how “Fifi” was made by a French toymaker de la Florsheim during the Resistance.

Over time, the two develop what appears to Alex to be a deepening friendship as she reveals a lifelong loneliness and lack of self-esteem. When he relates this to his even more over-the-top boyfriend, Barry unleashes harsh manic rants that contain a good deal of wisdom puncturing this burgeoning dream relationship. When Alex suggests that Barbra consider a film of Gypsy (a fictional proposal that would make real headlines three years later), she hires him to coach her. But Barry lambastes the egocentric absurdity of a 70-year-old woman portraying the mother of a five-year-old June and Louise.

Indeed, the laughs rarely pause as Alex giddily becomes seduced. But underneath Tolins is asking insightful questions about what fame does to distance celebrities from real life, whether they need us as much as we need them, whether we need them to preserve the impossible possibility of living in a fantasy world, and a half-dozen other queries. At one point, she muses to him that while she professionally and financially has everything anyone could hope for, it makes the rest of her off-stage life seem flat and disappointing.  She said she cherished her relationship with Jon Peters because “he knew what to do on Sundays.”

Tolins’ script brims with funny lines somehow made all the funnier (a) because they are meant to be delivered with a gay flair that is beyond Tim Gunn but not quite Ru Paul, and (b) Crawford and Arisco have polished the comic timing to a high gloss. When Alex finally gets to see Barbra’s main house he deems it “Monticello if Thomas Jefferson had real money” and refers to its elegant but wretched excess by noting “I felt like a fly being swatted by back issues of Architectural Digest.”

To be honest, the script belabors some points a bit too long and has a shade of difficulty sustaining interest since even with the alternate characters. Alex is really one persona with only a couple of familiar dimensions. Fortunately, Crawford makes Alex so infectiously exuberant and lovable that you rarely notice.

The budget-conscious production features a set of platforms and a few sticks of elegant furniture by Gene Seyffer, a peach sherbet button up sweater from Ellis Tillman and scene-setting projections of Babs’ home taken from her actual book.

It’s all meant to be a hoot that simultaneously underscores that the famous, like the Fitzgerald’s rich, are different than us – which is why we adore them.