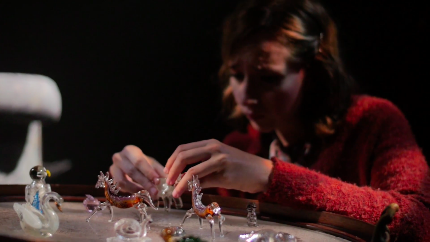 Sometimes you come upon a young theater company you may not have heard of, see a production and think, yes, it has flaws, but its virtues, commitment and intelligence make a kind of promise that entices you to see what they do next and what they do after that. The first season at Slow Burn Theatre Company was like that.

So it is with New City Players’ The Glass Menagerie playing at the Vanguard Sanctuary for the Arts in Fort Lauderdale.

The classic starts a bit sluggishly, suffers throughout from some debatable technical decisions, and some performances are more compelling than others. But it builds in polish and power until it produces a second act that consistently makes you glad you invested an evening.

The most memorable aspect is how director Timothy Mark Davis and his company use the small thrust stage with patrons on three sides to create an unusual intimacy. The audience feels itself inside the Wingfield’s tiny home and deep inside the family dynamic. Much of the action occurs within inches of the patrons in the front rows.

Accordingly, his actors scale back their performances so they are more naturalistic, less operatic and poetic than in productions behind a proscenium arch. This gives a different view worth considering, but which will cause some discontent among those accustomed to Menagerie’s banked fire, indulgent love of language and palpably restrained frustration from its characters. Instead, the air is imbued with Tom’s quiet regret in reminiscence and everyone’s disappointment at life.

Amanda (Tracy Manning) is far more stolid and less the faded coquette than usual through the first act, but she starts to come to life with the prospect of a gentleman caller. While her Amanda is not the risible and suffocating force of nature that Tennessee Williams wrote, Amanda’s abiding concern for her children comes clearly through Manning’s interpretation that improves as the play progresses.

Krystal Millie Valdes inhabits Laura, making her truly seem as fragile as her collection. It’s an underwritten role in which Williams basically requires her to shiver in fear most of the evening, only to brighten a bit with the gentleman caller and then crater again when he reveals his engagement. But Valdes never fails to make plausible Laura’s pathological shyness and her inherent sweetness.
Ryan Maloney’s Tom is a mixed bag. Much of the time, he, too, lacks the fire you expect. But he is believable in the memory scenes as a young man deeply dissatisfied with his lot. He has sufficient chemistry with his cast mates to put across that Tom does, indeed, love his mother and sister. This is especially clear in the tender fire escape scene with Amanda looking at the stars or in their silent stalemate scene they share the morning after their big fight.

Maloney’s problem is in putting across Williams’ gorgeous monologues whose verbiage borders on music and, when properly said, have cadences that sound like poetry. He barrels through them as if they were just simple vernacular.

Then there is a weird acting choice. In recent decades, the idea has gained popularity that Tom was or still is a closeted homosexual. That’s a defensible view. But every time Tom speaks to us in the present, he has a slight lisp and no discernable accent, but when he is in the past, he has no lisp but a touch of a Southern accent. You can make a theoretical case for this, too, but in practice it’s just distracting.

The best performance comes from Johnny Contini as Jim the gentleman caller. He nails the high school hero chastened by a life that has not yet fulfilled what he expected. Yet, his Jim has – unlike the others – gathered inner resources to begin reinventing his life. As Williams has him say, there is a difference between disappointed and discouraged. Contini’s Jim exudes a genuine geniality and underlying decency. The strongest acting in the production is his scene with Valdes as the two young people engage in a delicate emotional dance that leaves both them uncertain exactly what is happening between them.

Davis paces the evening fairly well, admirably allowing some scenes to breathe rather than race along. With the input of his team, he has adorned the production with inventive grace notes such as Amanda throwing her earrings on the dining table in disgust.

Davis’ biggest challenge – which he meets sometimes and fails at other times – is staging on a thrust in a tiny space. Even more than a show played in the round, the pressure on the director is to ensure that no one in the audience feels slighted. This is extremely difficult, but this production stumbles frequently.  Characters give protracted speeches with their back to some part of the audience, sometimes the entire audience. It’s worse when two people stay stationary having a lengthy conversation such as Jim and Laura’s tete a tete, which is played so far downstage that half the audience cannot see it.

NPC has invested an impressive amount of talent and thought into the visual aspect from Sara Bailey’s well-worn clothing to the dusty period furniture and furnishings to a three-level playing area of Maloney’s scenic design, all the way down to building a hollow floor of weather-beaten planks. A perpetual haze reinforces the sense of a dusty world where molecules of the past are always present. Faint music by Paul Bowles slips in to augment Andrew Paul Davis’ soundscape.

But perhaps the other notable aspect of the production is the lighting, designed by Joel DeSousa, that is brilliant and flawed at the same time. Tom says that being a memory play, the scene is “dimly lit.” DeSousa and Davis take this to heart, providing tightly focused pools of light adjacent to barely illuminated areas to create a highly atmospheric environment. The pattern changes every time a character moves around the set. This frequently works beautifully to amp up the appropriate claustrophobic feeling of the Winfield home as well as the sense of the audience peering into the past.

On the other hand, often the key character speaking is in near darkness. Even when they are illuminated, the person they are speaking to, whose reaction is crucial, is standing in a murk that makes it difficult to read their expression. This really is a distracting and crippling problem.

Even regular South Florida theatergoers likely have not heard of this company whose goals include, “to produce exceptional classic and contemporary works that provide an emotional and transformative experience for every audience member.”

New City Players in a tiny troupe of close-knit friends and relatives who have been performing in venues across Fort Lauderdale for two years with Godspell, Red and Rabbit Hole. Timothy Davis is the artistic director, Valdes is managing director, Contini is marketing director, Maloney is production manager and Andrew Davis is literary manager and sometime director. Some have South Florida roots and/or attended Taylor University in Indiana. Everyone appear to be involved in various aspects of the productions. Explore its website, http://www.newcityplayers.org.

Certainly, it’s not hard to pick at this current edition of The Glass Menagerie, but there comes a point where you suddenly realize that for some time New City Players have drawn you deep into this world and you are caring more than you realize about what will happen in this inexorable tragedy.

This is a company to watch.

The Glass Menagerie runs through July 24 from New City Players at The Vanguard Sanctuary for the Arts, 1501 S. Andrews Ave., Fort Lauderdale, on the west side of the street across from Broward Health Center. Performances 8 p.m. Thursday-Saturday, 2 p.m. Sunday. Runs 2 hours 20 minutes with one intermission. Tickets are $30 adults, $24 seniors and South Florida Theatre League members, and $18 students. Visit  newcityplayers.org.