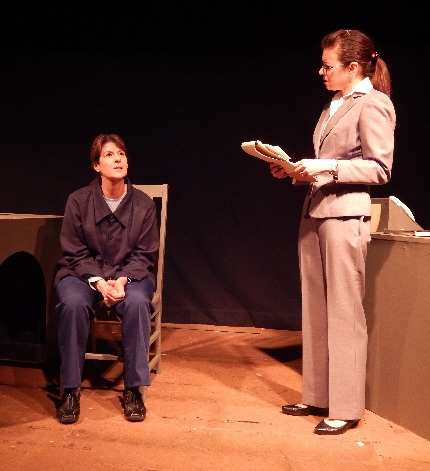 Not every show is a home run. Some aren’t even doubles. But that doesn’t deprive the audience of an interesting night of theater when talented actresses employ decades of craft and reserves of energy to making a flawed script land as well as can be hoped.

Patti Gardner and Jacqueline Laggy are worth watching spar as intellectual heavyweights in David Mamet’s decidedly difficult mess of a well-intentioned experiment, The Anarchist.

It’s the first offering of Primal Forces, an offshoot of Boca Raton Theatre Guild, meant by founder and director Keith Garsson to be edgier, more thought provoking fare than the mainstream offerings of the parent troupe.

Mamet’s premise sets up the last confrontation/interview between Cathy, a ‘60s political radical convicted 35 years ago for the murder of police officers, and Ann, a retiring prison official with inexplicable powers to influence Cathy’s parole hearing next door. Cathy tries to convince Ann that her embrace of Christianity and her time served entitle her to be paroled to see her dying father and to work in a religious convent. A skeptical Ann, who has fenced with Cathy for years, wants the prisoner to prove her remorse by revealing where her co-conspirator/lesbian lover is still hiding on the outside.

The problem with the source material is the premise becomes a transparent and flimsy excuse for Mamet’s goal to contemplate the nature of justice and the possibility of reformation. The arguments circle back on each other like a double helix, often at such a rapid pace that it’s hard to track the tornado of ideas. It’s a 70-minute very dense disputation of philosophy, theology, sociology and penology that often sounds like those 2 a.m. dorm room debates we cherished back in the day.

Another problem is that Mamet doles out snippets of Cathy’s backstory miserly – none of it for the first 15 to 20 minutes. The play simply drops the audience in a grey room with intelligent, articulate women jousting back and forth about the nature of God and the like. There’s no dramatic tension in the script for the audience to latch on to, no stakes, just talk. The actresses, God love them, have to communicate some kind of unspecific tension as if they were in a Pinter play. So it helps patrons to know the set up going in.

The play famously bombed in New York last season starring Patti LuPone and an overmatched Debra Winger – playing down the block from a revival of Mamet’s Glengarry Glen Ross. But Garsson saw it, was captured by the interplay of ideas and saw the work’s thematic resonance for Boomers, a part of the Primal Forces’ target audience.

That said, Gardner and Laggy under Garsson’s direction invest their own intellect and passion to keep the evening alive. They inhabit these artificial characters as best as anyone can ask and do what they can to make Mamet’s idiosyncratic cadences and sentence construction sound plausible. Both clearly labored admirably to understand and internalize Mamet’s graduate school course in philosophical concepts.

Laggy as the unbending inquisitor has the thankless task of playing an inscrutable straight man, basically asking questions so that Cathy can go off on a convoluted curlicues of rhetoric. But thankfully Laggy never lets up and her forward pressure is what propels the play.

Gardner, who is saddled with Mamet’s stilted murderously difficult dialogue, comes darn close to besting it by investing Cathy’s musings first with the prisoner’s banked emotion and later with her exposed passion. Her Cathy begins the hour professing a beatific peace that she says comes with having found the grace of Jesus. But (minor spoiler alert) as it becomes increasingly doubtful that she will be released, Gardner slowly and deftly morphs Cathy’s demeanor. Gardner eventually reveals that even 35 years on, Cathy’s rage against an unjust establishment – one that enabled her to coldly rationalize violence decades ago — remains unabated.

An on-point sidebar: In reading 28 recently-premiered scripts from across the country this winter, I’ve noticed that many use the vehicle of theater to blatantly sermonize and proselytize about an issue from bullying to governmental incompetence after Hurricane Katrina. In these shows, the medium of theater is just the platform for their discourse much like Mamet does here. Agitprop has a long and honored history; think of Waiting for Lefty or Brecht. But past playwrights have been more skilled in feathering their message into storytelling. Still, why do we notice and resent such naked efforts in theater less than in other arts forms such as music or novels? Remember Michael Crichton’s later bestsellers that would turn left for entire chapters of digressions such as rants against encroaching Asian ownership of American economics in Rising Sun? But I digress.

Garsson and company deserve praise for courageously undertaking such a challenge; hopefully, they’ll have a more rewarding piece of material to work with next time.

To read an interview with Garsson about the work, click here.