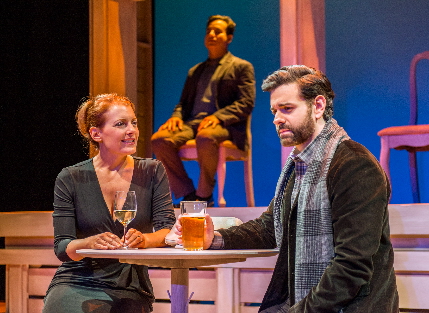 If God is omniscient, He must be inconsolably sad. Zoetic Stage’s superb production of Harold Pinter’s Betrayal puts its audience in that poignant and painful position in which Knowledge is, indeed, the poisoned apple in Eden.

Since Betrayal charts the dissolution of an adulterous affair in reverse chronological order, we know at each receding step what will happen to these people. Watching the lovers and the woman’s cuckolded husband, we easily chart the tragic arc. It begins with a final regret-tinted reunion tamped down by civilized don’t-make-a-fuss good behavior and ends with a scene of the erupting unbridled passions that initiated the relationship nine years earlier.

Few companies in South Florida could conquer this elliptical tale in which little substantive is actually said and even that is usually suffocated in banal chit chat separated by pregnant pauses. Emotionally, everything happens below the surface like lava roiling under the volcano’s cooled crust.

Zoetic’s arsenal here encompasses a trio of actors and a creative team all precisely and deftly molded by artistic director Stuart Meltzer. They shine particularly in that the audience always knows exactly what the characters are thinking and feeling despite the maddeningly oblique banter and silences.

To glean the most out of the irony and poignancy, in fact to get anything out of it at all, the audience must invest itself and its attention for the entire uninterrupted 90 minutes. But it is well-rewarded.

Set among the “veddy British” intelligentsia, Betrayal opens with gallery owner Emma (Amy McKenna) and literary agent Jerry (Nicholas Richberg) having drinks at bar two years after their affair ended. After a perfunctory but protracted round of innocuous inquiries about their families, Emma tells Jerry that she is leaving her husband Robert (Chaz Mena) who is Jerry’s oldest and best friend, as well as the publisher of Jerry’s clients. She says that in the heat of an all-night fight, she revealed to Robert the seven-year illicit relationship.

But in the next scene in which Jerry and Robert have a “civilized” confrontation, it becomes clear that Emma has lied to Jerry. She confirmed the affair to Jerry four years earlier – long before the lovers broke up and while the three maintained their various relationships. In a paradigm that is repeated in different ways in succeeding scenes, we realize that Robert has kept his knowledge of the betrayal a secret from Jerry. Jerry, in fact, feels betrayed that Robert never revealed that knowledge in some kind of anger.

Pinter addresses several issues simultaneously, although obliquely enough to provide fodder for many a post-show debate. He has created a triangle not so much with three sides so much as with three razor sharp corners.

The late actor/director/screenwriter/political activist and Nobel laureate, of course, was and is one of the most influential British playwrights of the second half of the 20th Century. His works are so difficult that they have rarely been attempted in South Florida (The Dumbwaiter by The Promethean Theatre back in 2010 and Old Times at Palm Beach Dramaworks last year). His scripts are famously sketchy blueprints filled with meaningless chatter and pauses that require directors and casts to discover, develop and insert crucial subtext.

Fortunately, the play is in the hands of Meltzer who keeps revealing an ability to analyze, pace and mount an astonishing range of work from satirical comedy (such as Clark Gable Slept Here) to harrowing social commentary (Fear Up Harsh) to musicals (Assassins). While Betrayal was evolving, he also directed a New World School of the Arts production of Thornton Wilder’s The Skin of Our Teeth.

His essential colleagues here include that cast. Richberg and McKenna were Zoetic members when the troupe was initially envisioned in 2010 as a loose repertory company. Mena was part of the Assassins cast last season and Detroit last fall.

Usually, critics use adjectives as space-saving shorthand to describe performances. But all three actors create beings so fully credible that their essence can no more be adequately reduced to traits than if you were trying to describe your neighbor.

The lovely McKenna exuding a casual sexiness has constructed someone cradling secret knowledge deep in her being. Much of the time, Emma’s private knowledge is neither a curse nor a source of power, but a fact of life that must be monitored. Oddly, but believably, McKenna’s Emma does not seem plagued by guilt at her betrayals of both men in various ways, only concerned at avoiding the devastation she knows will follow if the secrets tumble into the light.

As Jerry, the handsome Richberg (equal time here for physical description) initially seems more the model of a controlled upper-middle class British, but over the course of the play Richberg reveals Jerry to be a hapless slave to the emotional high and lows as the relationship devolves – or actually evolves.

Both actors’ characters change so subtly by millimeters that you become aware in the middle of some scene that these people have morphed from who they were two or three scenes ago. Compare their cauterized reigned emotions in the first scene with the ardent declarations in the later scenes.

But the triumph, a word we often overuse, belongs to Mena in a performance that once again makes you feel cheated that he simply isn’t seen often enough. His Robert, who also is a serial adulterer, prizes a seemingly impenetrable veneer of correct civilized behavior imbued in all classes of British society. Yet, Mena brilliantly exposes the tumult underneath when the shell briefly cracks open.

There’s a terrific moment when Robert confronts Emma that he sussed out the existence of the affair the day before, quietly reveling in his ability to keep his composure in the exchange. But when she tells him the affair actually has been going on years, his smugness vanishes in a paroxysm of stunned anguish.

Once the audience knows that Robert knows — but that in separate scenes Jerry and Emma don’t know he knows — Mena is a fascinating portrait of a spring-loaded bear trap flawlessly camouflaged from his prey.

One of the best executed scenes thanks to Metlzer and company is when Robert blithely tosses off a bunch of meaningless small talk in an Italian vacation hotel while his wife tries to read a manuscript. At some point, long after the tipping point has actually occurred, the audience realizes that Robert has been pricking ever more pointedly at Emma until she knows that he has tumbled to the affair. From a scene of domestic banality, we see Emma frozen still in the bed and Robert digging ever deeper without actually spelling out that he knows of the liaison.

As always, the creative team at Zoetic does exemplary work including Michael McKeever’s thrust setting of bleached blond wood to contrast with Estella Vrancovich’s stylish black outfits. The lengthy scene changes were made palatable with the jazzy plucking at an upright bass by Dave Wilkinson.

The fact that Zoetic Stage would attempt such a piece, artistically and commercially, let alone succeed so thoroughly, is validation of what has been increasingly evident: that Zoetic no longer is an up-and-coming company of great promise; it has arrived as a mature, reliable purveyor of fine theater.

Side note: Zoetic went the extra mile opening night by having Daniel Llaca, who later played a waiter in café scenes, give a genial, collegial but clear admonition to the audience to take out their cellphones and turn them completely off. He then asked everyone to raise their phones in the air to confirm they had complied. You know what’s coming: About 15 minutes was all one privileged self-centered woman could stand; she had, of course, somehow thought the plea did not apply to her, not her. She read emails and texted until someone cleared his throat for the fourth time.

Betrayal from Zoetic Stage as part of the Theater Up Close series performs through May 31 in the Carnival Studio Theater at the Arsht Center’s Ziff Ballet Opera House, 1300 Biscayne Boulevard, Miami. Performances are at 7:30 p.m. Wednesday-Saturday, 4 p.m. Sunday. Tickets are $45. Running time 90 minutes with no intermission. (305) 949-6722 or www.arshtcenter.org.