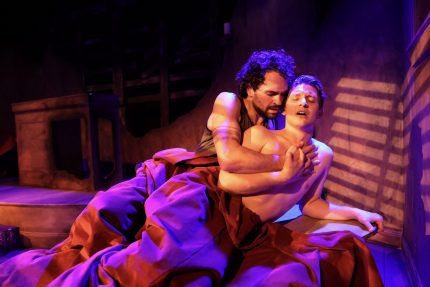 Armature was first drafted eight years ago and in development ever since, but its world premiere at Island City Stage could have been written last week as it explores racism, politics, homosexuality, plus complex marital and parental relations under stress in a tale suffused with humor and tragedy.

The deeply committed work of the cast, co-directors and design team delivers the guts of Andrew Kramer’s overarching earnest call for us all to aggressively address the social challenges of the day – “to create change.”

To underscore it, the playbill reprints the definition of “armature” as part of a dynamo – a device changing movement into electricity.

But this admirable production illustrates that the script seems to still need a bit more work with a really good dramaturg, as nearly every world premiere does these days.

The basic premise is that a charismatic black woman Blythe Ames is running as a progressive for governor with the qualified support of her husband Denson and her adopted daughter Monica. In a nearby leather bar, Evan, a purposeless but attractive coke-sniffing blogger hooks up with Shod, an ultra-sexy scruffy and tattooed man of mystery. The story is narrated in flashbacks leading up to the ominous “The Burning,” told by the bar’s manager, an imposing philosophical “matriarch of a man” known as Mama.

These two stories and their denizens seem to have nothing to do with each other for the first third or more of the story, but Kramer sends these six characters on a collision course that clearly is not going to end well as the narrative closes in on the The Burning. (The entire show occurs on Robert F. Wolin’s burned out hulk of a building with charred timbers exposed).

Kramer drops in clue after clue that eventually coalesce into a whole. Several plot twists and developments punctuate the evening—although frankly most of them you can see coming because the playwright deftly slips in hints throughout if you’re paying attention and you have a bit of imagination.

But the tone well-served by co-directors Andy Rogow and Michael Leeds is that of theatricalized storytelling. For instance, intermittently, one character will step out of the story and reveal the backstory of another character who often repeats some of the speaker’s words.

While characters often speak in vernacular in the flashbacks, they can break into impressively wrought lyrical passages such as the show’s opening as different lines said by different members of the ensemble as if poetry.

Infused in the marrow of the play is a great deal of frank discussion and depiction of lust-driven sex, including some dramaturgically defensible nudity under the eye of intimacy director Jeni Hacker.

Kramer has intertwined a dozen insightful and topical threads. Sometimes these facets—no matter how diverse—meld together smoothly; sometimes they seem a bit cobbled onto each other.

But when it works, his colliding ideas sizzle such as when Shod, revealed to be a bluntly outspoken conservative, assails Blythe.

SHOD: (You’re) speaking as if you really are The Patron Saint of Black Politics…. You don’t think your policies are incredibly racist? … There are Black Lives Matter meetings at your church, right? … It’s a problem…. They’re a hate group. …You’re OK with being affiliated with a hate group?
BLYTHE: Just because I am focused on providing more legitimate opportunities – for people of color, especially young people of color, doesn’t mean that I’m seeking to take those opportunities away from you.

But among other items needing fine-tuning, there’s a key problem either in the play’s construction, the direction or this critic’s ability to appreciate the writer’s vision.

The play seems to turn inside out—not the big reveal that we won’t spoil—2 hours into a 2-hour 15-minute show indicating that either you have missed a significant aspect of the play’s organization and progress, or you weren’t supposed to figure this out until the penultimate scenes, or the playwright-directors simply failed to make this clear from the beginning.

Trying hard here not to spoil something: If you read the program, you might see that the events you are about to watch occur before and after an event called The Burning. Then Mama prefaces scenes as they unreel in countdown fashion with “Six days before The Burning” and then “Four days before The Burning” as we head toward the climax. What no one tells you is that nearly every other scene occurs after The Burning. The time flow goes back and forth, back and forth. Once this is revealed, it certainly changes how you look at the past two hours and begins to raise questions. If that was not what was wanted, lighting designer Preston Bircher (who has done a terrific job creating different locations) could perhaps cast the “other” scenes in a different hue.

Rogow and Leeds have guided a fine cast. As always, just always, Karen Stephens simply becomes the former community organizer committed to making a change but investing her with complexities and flaws.

It’s been a while since we’ve since Kent Chambers-Wilson on stage, but he makes Mama a memorable creation: someone who has seen more than his share of tragedy.

Michael Ford makes Shod’s mysterious fulcrum a compelling character. It’s a tough role because there seems to be a basic disconnect between the two sides we see through the evening, but his performance assures us we will understand eventually.

Yesenia Ozuna portrays Monica’s warring instinct as a sexually-active 18-year-old rebelling against her parents while still loving them. Ozuna was integral in the successful Raisin in the Sun for New City Players in 2019 and African Heritage Cultural Arts Center’s The Colored Museum in 2018.

It’s wonderful that solid, troubled Denson gives us the welcome return of Keith C. Wade, another veteran not seen on stage since M Ensemble’s Seven Guitars in 2018. Wade creates Kramer’s family man supportive of his wife, but who has spent years keeping his own secrets.

Matthew Salas, the earnest but awkward director character in Main Street Players Shakespeare is a White Supremacist last year, delivers a completely different persona as the self-assured, self-centered always-on-the-make Evan. Rogow wrote in the program that Evan “will be easily recognizable in any bar along Wilton Drive.”  Salas bravely dives into this pretty boy whose only interest and controlling obsession is sex.

Opening night, almost everyone in the cast stumbled a bit over their lines on occasion, but that should smooth out by the time you see it.

A nod is due costume designer Casey Sacco who instantly establishes characters with what people wear from the button-down oxford shirt to the businesswoman’s chic outfit to the scruffy torn bluejeans to the Mama’s studded leather gear.

Covid Protocol: All patrons are required to wear masks and provide proof of vaccination (it can be on your phone) or a (within-48-hours) negative covid test.

Notes:  For helpful tips about directions, parking, arrival time, etc., please visit the Contact Page at http://www.islandcitystage.org/contact/ .  Do not park in the retail spaces directly across from the theater.  They may tow your car. 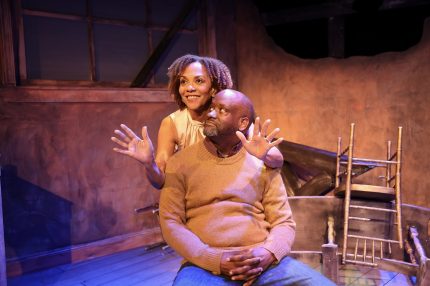