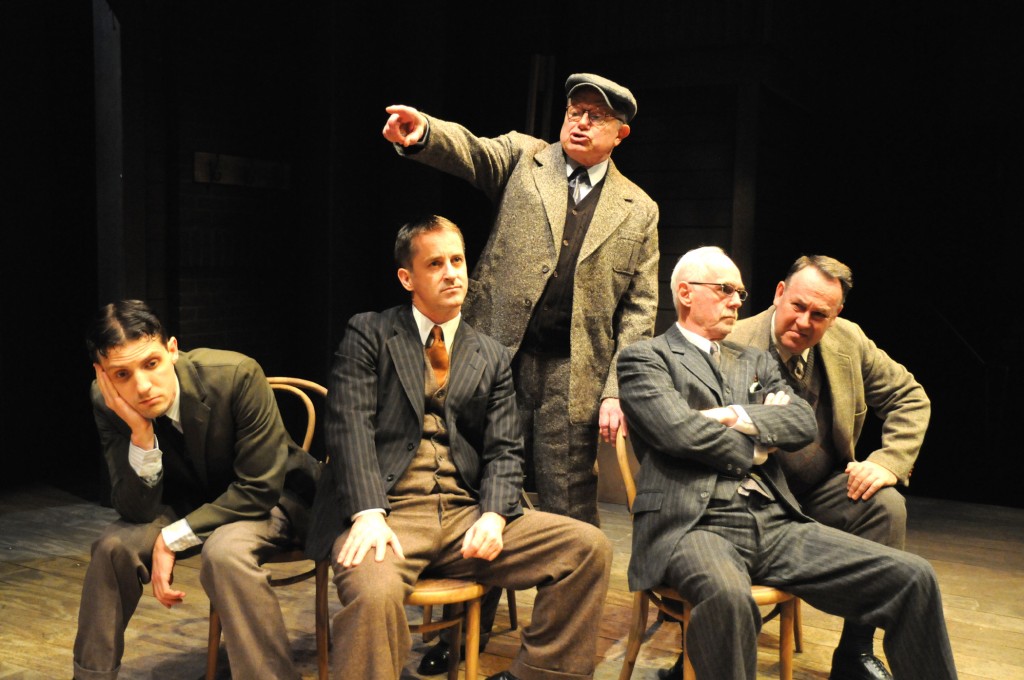 Art as an ennobling sanctification for both the artist and the observer whose interpretation completes the symbiotic circle is just one of a dozen themes swirling around Palm Beach Dramaworks’ stimulating production of The Pitman Painters.

For all the profound concepts being explored, Lee Hall’s true life tale of British miners who created folk art is as plain spoken as its blue collar heroes reaching out for something more nourishing than their hardscrabble trade can provide.

In fact, one of the rhetorical issues batted around is whether the creation of Art and its appreciation transcends social strata and class. The Pitman Painters as well as Hall’s screenplay and libretto for Billy Elliot say that everyday people’s ability to create and appreciate Art puts the lie to the arguments creating a caste system.

Set just before, during and after World War II, a group of miners and their friends seeking an evening of adult education randomly choose an art appreciation class. When the teacher finds they have no exposure to art to appreciate, he assigns them to create it themselves just as a way to familiarize themselves with the ideas.

Instead, the men display an amazing latent ability for depicting scenes of life in the mines and their neighborhoods near the Scottish border. The efforts of the teacher to use the paintings to awaken the painters’ sense of self-worth lead to regional exhibitions, a national reputation, an increasing sophistication in their work and two acts full of discussions about Art. The painters are not noble savages, but ordinary men whose intelligence, instincts and talent exist independent of the sophisticated veneer of fine society.

Threaded throughout the script and the production is the ever-present danger that the well-meaning efforts of the teacher, a wealthy patron and the art world will slip into paternalistic condescension. At a lecture, the teacher implies that these men’s accomplishments are proof than anyone can create art. One argues that, no, this is an individual’s talent and skill, just as some people have athletic skill that others do not. But what all agree is that the ability to appreciate Art is universal.

For Hall, Art is also a social tool Art does not exist for Art’s sake (MGM’s motto notwithstanding). The power of Art carries a responsibility for change. Unfortunately, in this and Billy Elliot, the transformative power of Art does not completely deliver the Socialist utopia that reformers hoped it would at the time. Hall believes in the brotherhood of man and inherent worth of human beings regardless of their station, but he has little illusion that such sentiments will trump the realities of class warfare.

All this philosophy is made accessible by Lewis, South Florida’s expert at clearly depicting complex concepts, plus the down to earth performances from a troupe of Dramaworks’ veterans. 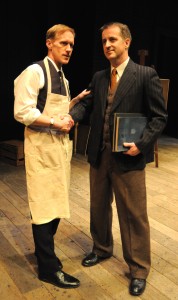 Dennis Creaghan (Freud’s Last Session) is the crusty leader of the group; Colin McPhillamy (Copenhangen and Promethean’s The Banality of Love),  the slightly hapless and least sophisticated member; Joby Earle doing double duty playing a young member unable to find work, as well as the sophisticated abstract expressionist Ben Nicholson;  Rob Donohue as the Socialist union leader; and first among equals, Declan Mooney (The Weir) as the most talented and insightful member who is offered a chance like Emlyn Williams to use his talent to escape. Earle gets one terrific aria, set as the war intensifies, in which the young man rages at his older friends for sticking to their modest themes in contrast to the agony convulsing the outside world as seen in Picassso’s Guernica.

The catalyst to the plot is John Leonard Thompson (unrecognizable here from his roles in American Buffalo and Candida) who plays the cultured but ineffectual academic boffin moonlighting in this night class and who struggles throughout not to patronize these men.

Kim Cozort (also Candida) plays the wealthy patron who offers Mooney’s character a way out of the pits and Betsy Graver (Blasted) plays a life model.

All of them deliver seamless, credible performances, especially the men who are never quite comfortable in a world that they had been taught to believe was reserved for a more refined, intellectual class.

As always, Dramaworks’ skilled creative team creates a multi-sensory environment. Michael Amico who bowled everyone over with his detailed set last fall for All My Sons, wisely dials it back for a simpler but equally evocative multi-purpose scene lined with dark woods that could be the same ones used to shore up the galleries in the mines instead of the galleries in museums.

He’s aided immeasurably by the morphing lighting of Ron Burns, and Matt Corey’s jolting soundscape of screeching whistles, clanging bells and grinding gears that remind us this is not a world of drawing room and high tea. Erin Amico has clad the men in a variety of modest tweedy Sunday-go-to-meeting outfits offset by rough work shoes.

The sole quibble is that Pitman is a small chamber piece and the natural reticence of its heroes sometimes makes the audience long for just a little more fire to drive the dramatic flow other than Earle’s outburst. You sense that we should feeling a swelling pride in the innate potential of Mankind and a desire to cheer these men along their way. But while the play touches the mind, it doesn’t really touch the heart.
The Pitman Painters runs through March 18 at Palm Beach Dramaworks,  the Don & Ann Brown Theatre, 201 Clematis St., West Palm Beach. Performances 8 p.m. Wednesday-Saturday, 2 p.m. Wednesday, Saturday, Sunday; 7 p.m. Sunday. Tickets are $10 (students) to $55. Call (561) 514-4042, ext. 2, or visit www.palmbeachdramaworks.org.