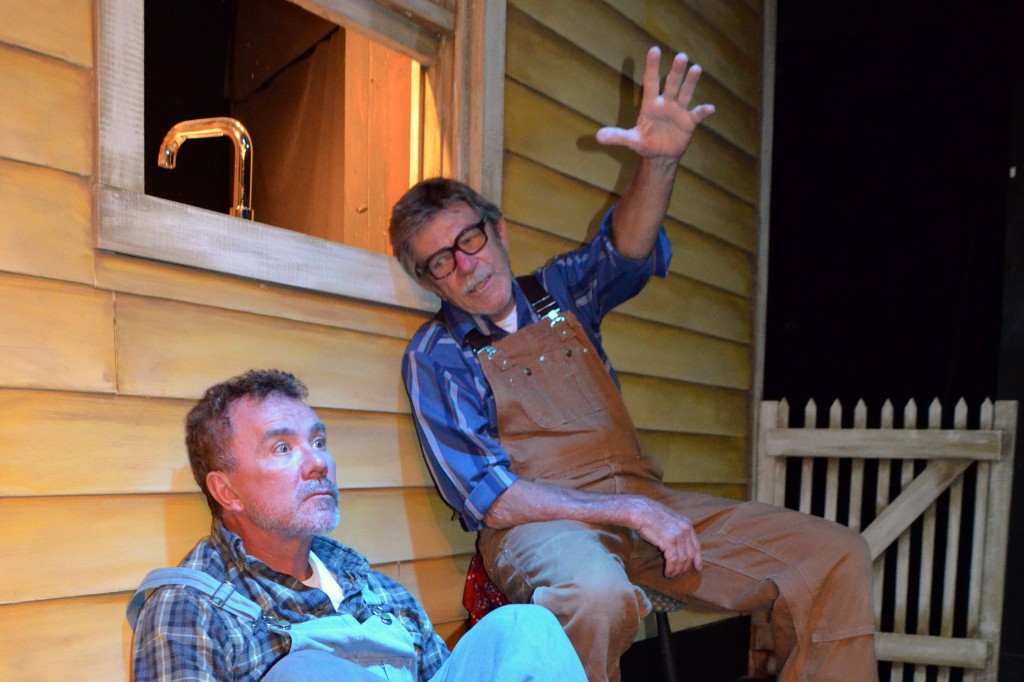 The bonds of friendship and the power of art to transform lives are illustrated in The Drawer Boy by Michael Healey, now receiving a lovely production at Thinking Cap Theatre in Fort Lauderdale.

The Drawer Boy was first produced in 1999 and seen in South Florida in 2004 at Florida Stage in Manalapan. The story takes place in Ontario in 1972, at the farmhouse of Morgan (Jim Gibbons) and Angus (Mark Kroczynski) two bachelors who’ve owned the place for 30 years, ever since they came home from World War II, where Angus suffered a brain injury that destroyed most of his memory. Their quiet routine is disturbed by Miles (Scott Douglas Wilson) an actor and playwright who belongs to a theater collective putting on a show about local farmers.  He asks to stay with Morgan and Angus in order to observe them, interview them, and use what he’s learned in the play. “We’re here to get your history and give it back to you,” Miles says.

Miles makes good on his statement more than any of them could have imagined.  One night he overhears Morgan telling Angus the story of the two women they loved.  Miles is so moved by the story he uses it in the play. When Angus sees the play, it stirs memories thought long dead, and threatens the friendship between the two men.

The Drawer Boy is based somewhat on real events.  There really was a theater collective in the early 1970s that set out to document the stories and lives of Canadian farmers. The result was a theatrical event called The Farm Show, which is credited with the origins of Canadian alternative theatre.  ears later Healey met some of those involved with The Farm Show and the collective, and wrote The Drawer Boy, a tribute to the power that art has to change lives.

The Thinking Cap production of The Drawer Boy is haunting and packs an emotional wallop. Although the stage is tiny, director Nicole Stodard and her design team bring an expansive feel to the play. The look and sounds of a farm come to life, underscoring the poignant story and powerful performances.

Wilson is terrific as Miles, the earnest, naïve city boy who’s never been closer to the great outdoors than a potted plant. Jim Gibbons and Mark Kroczynski have real chemistry and make the gentle rapport between Morgan and Angus believable.

Kroczynski has the showier role, playing a man who’s brain damaged and also who experiences play’s epiphany, and he delivers. The exaggerated speech, lumbering gait and mannerisms with which he imbues Miles could have easily gone over the top, but Kroczynski deftly navigates his way, never steering Angus into parody.

Gibbons, one of South Florida’s most underrated actors, is always a pleasure to watch, and his portrayal of Morgan is richly textured and nuanced. He’s laugh-out-loud funny when he’s toying with Miles, providing in-depth answers to the actor’s inane questions about farming, and he’s mesmerizing when he’s telling Angus about their past.  Just try not getting lost in Gibbons’ voice when he tells Angus about the women they loved.

There’s a lot of theatre to choose from right now in South Florida, and Thinking Cap Theatre’s production of The Drawer Boy is one of the best of the bunch.  Don’t miss it.