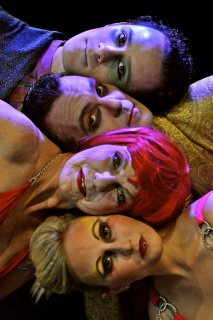 It can’t happen here. It cannot happen again. That was Mankind’s insistent mantra during the second half of the 20th Century about the Holocaust and the entire insanity of the Third Reich.

With brilliant but unrelieved corrosive cynicism, the musical revue at the Theatre at Arts Garage mercilessly draws unnerving parallels between the dissolute Weimar Republic and 21st Century America, bluntly underscoring how ripe we are for fascist demagoguery in a heated election cycle.

Freely adapting English translations of satirical cabaret turns of the period, playwright Jeremy Lawrence also has directed four skilled performers in an evocation of a soulless society dancing on a precipice as a bulldozer inexorably approaches to shovel them over the edge. The air is putrid with the sulphurous smell of rotten eggs.

This sardonic and carnal recreation of a Weimar cabaret isn’t the light musical fare Floridians are accustomed to seeing in the summer. Many intelligent discerning theatergoers will flat out hate this show. But an equal number will be intrigued and fascinated if not enraptured by the abyss-dark humor and timely political comment. For them, this is courageous gutsy programming.

If you’re not alienated at some point, odds are you’re not paying attention. But the point is to upset, to unnerve. It achieves that goal so well that many times the audience musters only a smattering of applause – partly because the songs don’t have a button just a last verse, but mostly because people can’t allow themselves to applaud a love song to Attila the Hun cloaking a character’s reverence for Adolph Hitler.

Still, some turns are transcendently chilling. After lightly sprinkling anti-Semitic references throughout, the show reaches a horrifying crescendo with a spirited version of Bizet’s saucy teasing Habanera from Carmen augmented with a list of social and economic woes, each blithe lyric ending with the happy rationalization that “the Jews are all to blame.”

Throughout, Lawrence’s double-entendre lyrics twist and turn like depraved Cole Porter, corkscrewing so intricately that it seems like language itself has been perverted.  That same quality imbues the rhyming couplets that he gives the vampiric Emcee to introduce each number.

Lawrence mounted the show in 1996 at the late Florida Stage under the auspices of Louis Tyrrell, the current artistic director of the Theatre at Arts Garage. Tyrrell asked Lawrence to update the show this time round and pepper it with more contemporary references. Lawrence has hammered at the resonances with mentions of Sarah Palin, the Tea Party and Occupy Wall Street. But his original material is inspired skewering of hypocritical attitudes toward sexuality, abortion and other issues that know no decade.

The cast is stunning in its complete embrace and skilled delivery of this swill. Veteran local troupers Wayne LeGette and Lourelene Snedeker are joined by New York actress Alexa Green who wraps her soprano around a debauched love song as she tries to seduce audience members. Add in recent Palm Beach Atlantic University grad Pierre Tannous to complete a zombie quartet slumming in the gutter as they suck the last dregs of life out of a society.

LeGette as the pale-faced, gaunt-eyed Emcee is especially effective with an angry leer that says, “Well, if this is the way you want the world, you asked for it.” He smoothly delivers Lawrence’s glib patter. And when he says, early on, “Why dare? Who cares? It’s all a swindle,” he sets the tone for the rest of the evening.

Snedeker (who received a Carbonell nomination for the 1996 edition) reminds us once again with her expressive face and lithe body language how we’ve missed her ability as a musical theater performer who is equally a fine actress. Near the end of the evening, she drapes herself over a chaise and caresses the lyric line “I’m a perverted filthy swine,” dropping her rich soprano deeply into a throaty mezzo range that is simultaneously alluring and despicable.

The kaleidoscope of delightfully sleazy costumes is by Palm Beach Dramaworks/Florida Stage alumnae Erin Stearns Amico who dresses the living dead in a motley of gaudy and garish. The set and lighting by Stephen Placido look a bit underfunded, but they still echo the kind of dive your mother warned you to avoid.

A nod to Michael Yannette, the musical director, arranger and bordello piano keyboard player, plus his bandmates Roy Fantel on percussion and Tom Jaworski on an assortment of reeds and brass.

In the end, Cabaret Verboten’s power is that while it initially seems meant to be a time machine, in fact, it has the feel of an endless Jersey Shore marathon interspersed with ads for The Kardashian Book of Etiquette, set in a very recognizable post-modern Hell.  Not for everyone.

A brief promotional video is at: artsgarage.org/