Run the Race With GableStage 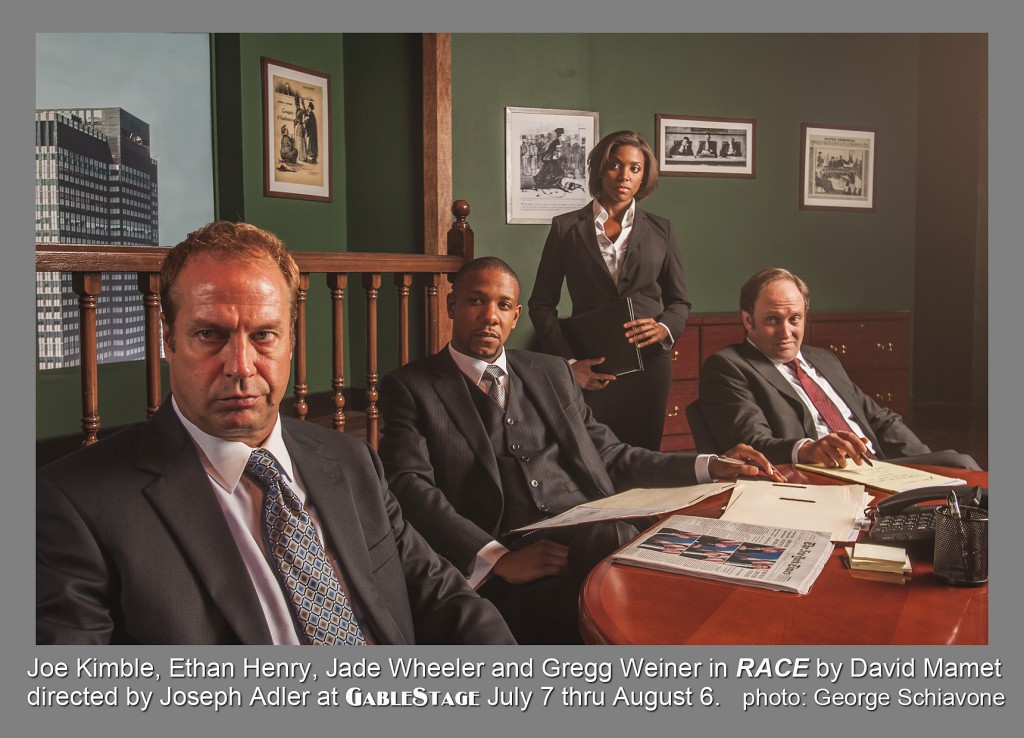 Lawyers banter about innocence and justice in David Mamet’s incendiary play at GableStage, but the characters don’t bother to dissect long-decided issues about how the judicial system’s sausage is made. The title of the play and the real subject is Race.

The double-helix construction of the twisting dialogue underscores Mamet’s thesis that bogus baggage of race relations subverts any meaningful discussion of seemingly straight ahead subjects as innocence and justice.

Director Joe Adler and his quartet of actors deftly serve an overflowing plate of ideas to chew over. Mamet, indulging his increasingly conservative bent, doesn’t just tease the constipation that political correctness has imposed on social relations but savagely rips it apart. It’s not very palatable theology for us bleeding heart liberals but it’s hard to argue with his concern that the pendulum has swung way past  rational thought.

Mamet posits that an ultra-wealthy white client (Joe Kimble) has been charged with raping a young black woman in a hotel room. The client claims this was a consensual episode in a long-time relationship and he is asking for help from the high-powered law firm of two veterans of negotiating legal swamps, a white lawyer (Gregg Weiner) and his black partner of 20 years (Ethan Henry). Watching intently is an eager, black and beautiful law review grad (Jade Wheeler) who dutifully soaks up the partners’ observations.

Every time the lawyers spar, the question is rarely about the merits of evidence but how jurors will evaluate that evidence in the prism of racial politics. These men long ago jettisoned idealistic pushback against pragmatism. To them, deeply ingrained, almost unconscious prejudices of juries (and by extension, society) are not something to waste time bemoaning, only realities to exploit.

Trying to get a clear reading of the facts in the case is complicated by their client’s feeling of social guilt, separate from the incident.

Plot-wise, Mamet throws three or four curve balls in the 85-minute play, upending barely-created status quos and forcing our protagonists to rewrite their tactics – underlining just how far their situational ethics can bend.

It’s the kind of thought-provoking material that Adler, who also helmed Mamet’s Speed the Plow, revels in. The 2009 Broadway edition was faster-paced and more brittle — something that might have helped the first quarter of the GableStage evening. But once the legal team is on board with the case, when the stakes are higher, the tension more pronounced, Adler’s skill at pacing pays off. On Broadway, the arguments flew so fast that the effect was a dazzling torrent of words, but it was impossible to track what was being said or recall specifics later for post-show discussion. Adler’s nimble but calibrated pacing allows the audience to actually follow the meat of Mamet’s arguments and has them walking out thinking about what was being said.

That’s an advantage because the narrative arc is clearly secondary to Mamet’s desire to air his themes in a steady procession of well-crafted diatribes. Also problematic from a dramaturgical standpoint: Since none of the characters other than the neophyte lawyer are especially likeable or sympathetic, you can admire Mamet’s artistic courage, but he has not given the audience a protagonist to side with.

Sometimes David Mamet’s aphorisms are so glib and delivered with such force that you rarely notice that not every pronouncement makes sense. For instance: “This isn’t about sex; it’s about race,” Wheeler says. Weiner retorts, “What’s the difference?” Well, Davey, there is a difference, even in the world of moral neutrality that you’ve created here. The truth is, Mamet has the characters fire back retorts and dictums too fast for anyone to believe their characters have actually thought about what they or their scene partner has been saying.

And yet, thanks to Adler and Company, the whole enterprise is an intellectually engaging and accessible fern bar brawl of ideas. The only stumble came at the finale which is so muddy that the audience wasn’t sure the play was over opening night.

All four actors are in fine form, especially Weiner and Henry. This is Weiner’s fourth role for GableStage in a row, but it’s perhaps the one that most fits him most comfortably (although his corrupt cop in A Steady Rain was masterful). He inhabits the skin of a cynic who thinks he has seen it all and who can instantly avail himself of pat precepts to apply to whatever challenge appears. He’s also the most comfortable of the actors in Adler’s version of Mamet’s infamously difficult cadenced dialogue.

Henry, who presented us with a completely differently animal as the drug counselor this year in The Motherf—er With The Hat, is as smooth and mercilessly clear-eyed as the other character was flawed. He had just the slightest difficulty with the idiosyncratic Mamet-speak in the early scenes, making his assertions sounding slightly stilted, almost Shakespearean. But after he warmed up opening night, he slid smoothly into the role and he wielded the verbiage like a cancer surgeon ruthlessly slashing through disingenuous protestations of political correctness with a well-honed meat cleaver.

The shamefully underemployed Kimble, whose rubber-faced features gets him cast in comedic roles, makes a wonderfully woebegone magnate, at sea in an environment he has absolutely no experience with or even comprehension of. He didn’t quite have the Donald Trump arrogance and entitlement that the script seems to calls for, but he nailed the uneasiness of being on the short end of the equation and needing someone’s help.

Wheeler, a Washington, DC, actress, is convincing as the eager, sharp  apprentice who seems uncomfortable at the unvarnished expose of racial politics that her two bosses seem comfortable in analyzing and then passing on to her in Socratic Q & A’s.

To those bemoaning a lack of substantial fare during the summer, Race is what you’re looking for.

One Response to Run the Race With GableStage