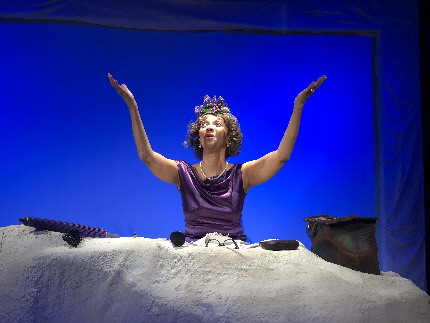 Some theater, like much visual art, is meant to be a depiction — uncompromisingly honest and uniquely gifted with the ability to limn in three dimensions and five senses, with a living human being at its center. Ruminations, meditations and contemplations may spin off from the experience but they will likely happen in the privacy of the viewer’s mind.

Such is the Thinking Cap Theatre’s stunning production of Samuel Beckett’s “other” masterpiece Happy Days, offering an unmitigated triumph of a performance by Karen Stephens expertly molded by Nicole Stodard.

To say this absurdist and bleak work rooted in the numbing repetition of life’s routines is not for everyone is a gross understatement. Not all art lands with everybody, no matter how sensitive or artistically sophisticated the audience might be. Besides, this work demands you invest your complete and intense focus for 90 minutes. Some people are going to be bored. Some will downright hate it. But others will be mesmerized. Others will be transfixed. Few will escape without considering whether how we use the time of our lives is meaningless. So Hello, Dolly! and Hairspray this is not.

And doubtless, as with any piece of art, people will develop diverse opinions about what it all meant. In your perception of a painting, the viewer is as much a participant as the painter. That multiplies exponentially in the communicative genre of performance. You and the artist can only hope that there is some overlap between your perception and their intent.

Beckett’s plotless premise: Winnie, a 50-ish wife, wakes every morning buried up to her waist in a large sand dune on a seaside. In the second act, she is buried up to her neck. In the first act, from somewhere behind the dune we can see a bit of the upper back of her husband, Willie, apparently barely dressed if at all; later he crawls out in front of us in the second act dressed in a fine full English suit ready for the Ascot races. For the most part, he limits his marital communication to reading a newspaper headline and grunting occasionally.

Winnie wears a purple cocktail dress, a double string of pearls around the neck and a fascinator hat. With Stephens’ demeanor, she seems to have just left the monthly luncheon of the Palm Beach Garden Flower Appreciation Club at the Breakers – both recognizable and alien to most audience members.

Between her jarring wake-up bell and her go-to-sleep bell, Winnie goes through a series of routines as she apparently has done for who knows how long. She inspects a disparate array of items in an old travel bag alongside her and speaks a non-stop monologue, as much to herself as to the audience.

She prattles on, articulating whatever stray disconnected thoughts bounce around like an indefatigable Superball gone berserk. She often comments, “Oh, this is a happy day” at even the most unfulfilling occurrences. She often recalls an unfettered past with yearning, stamping it with the refrain “in the old style.”

The one pleasure in her routine, one which she apparently can choose when to invoke, is to sing a song. But she guards it in her daily pattern like a precious ephemeral succor.

Early on, Winnie pulls from her bag a pistol that she lays to the side, but she never seems to think to avail herself of it during the play, but which the audience wonders might be a blessing. (Or perhaps it is meant to be a simple reminder of death. Take your pick.)

Initially, she seems very much reconciled to, even accepting of her situation like most people consider the sun rising in the east or as natural as breathing. She occupies herself with tasks prosaic, blasé and, on point, meaningless.

While she initially maintains a restrained controlled demeanor, Winnie exposes through the most subtle shadings the erosion of her supposed optimism. She can only succumb to despair two or three times in brief bursts because a full surrender would mean a complete acknowledgement of the horror of her meaningless present and her suffocating future. But eventually, she allows herself to dream: “Perhaps some day the earth will yield and let me go, the pull is so great, yes, crack all round me and let me out.”

The vision of Happy Days echoes the absurdist and existential vibe of Beckett’s Waiting for Godot, but it’s even bleaker with far less humor and, in its final third, a frightening claustrophobic depiction of encroaching paralysis.

Stephens, once again cements her status as one of the state’s leading actresses whose range was demonstrated in the past 12 months with the wife in Fences, the elderly sister in Having Our Say, the abbess in The Bridge of San Luis Rey,  and the anguished mother in American Son.  She inhabited these roles so completely that you forget in those moments what she has done before. Only in her superb Bridge and Tunnel, in which she performed 14 distinct characters, did you realize while sitting in the audience just what a range she has. And now her Winnie is yet another character distinct from her earlier roles.

How she and Stodard have mined so many colors and moods is a wonder. Stephens maintains the intense concentration required as Winnie goes off on tangents and refocuses over and over in the space of a few lines. As praiseworthy as Stephens’ work is, equal credit must go to Stodard who has choreographed this steady ride with deliberateness and a sensitive receptivity to Beckett’s script.

Part of the faithfulness that makes the play hard to stick with for an hour and a half is Winnie’s verbal style: very declaratory, almost observational with an almost formalized rhythm underscoring the routineness. Fortunately, Stephens’ animated face reflects an impossibly long and varied catalog of shifting emotions and reactions. It’s not just her eyes and mouth but the entire face along with what limited body language is possible.

Jim Gibbons once again provides support completely in sync with the absurdist vibe as Willie.

To be honest, to this observer, what Beckett was positing thematically in 1961 is not as foreign territory in 2020. So we understand what he was driving at far earlier; if he was writing it today, he might take about 15 minutes off the script.

Design wise, credit Alyiece Moretto-Watkins for the mesa-like dune with tufts of grass, and Bree-Anna Obst for a nimble lighting design, which keeps the emotional ambience changing and provides some respite from Beckett’s monotony.

Sometimes, this play is presented in two acts with an intermission. Here there is a blackout to rearrange Winnie’s plight and then it barrels on through, which keeps the throughline going but gives the audience no respite from its growing discomfort. But if the audience becomes uncomfortable, even feeling a bit suffocated themselves, that likely is Beckett and Stodard’s goal.

Safe to say that other than the soon-to-close Outré Theatre Company, no one other than Thinking Cap and Stodard in this half of the state would even attempt Happy Days, let alone triumph as it has. As it opens its tenth season, we ought to be grateful for the opportunity.

(Full disclosure: This critic served for several years as a panelist with Stephens on BCON’s Spotlight on the Arts program founded by Iris Acker.) 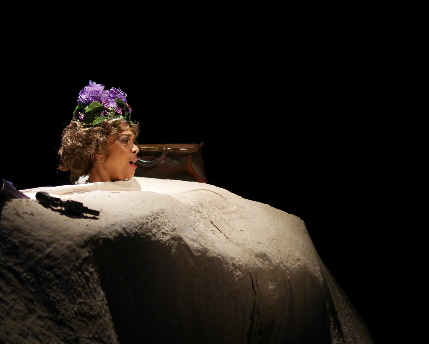