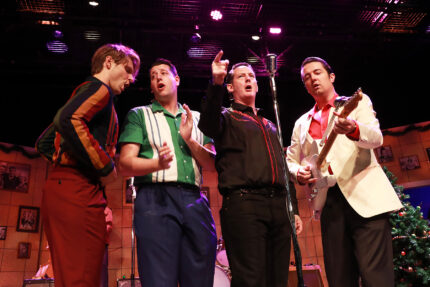 The rousing Tony-nominated Million Dollar Quartet was one of the most successful shows that Actors’ Playhouse has put on in its 35-year history, so much so that the 2016 production was revived in 2018 with most of the same cast.

It has the same virtues and flaws as the previous editions: impressive musicians with winning personalities delivering a driving evening of kick-butt music, and a script of clunky exposition trying to hide it being a thin excuse for an inarguably entertaining revue of classic music.

The original premise revolved around a true-life iconic evening – Dec. 4, 1956 — when Elvis Presley, Carl Perkins, Johnny Cash and Jerry Lee Lewis all visited the Sun Records studio in Memphis where they got their start. Perkins and kin were recording with novice in training Lewis playing backup. Elvis just happened to visiting and Cash dropped in to hear Perkins. Eventually, they just sort of fell into playing together and producer Sam Phillips, no fool here, began recording the impromptu session.

Its ensuing plot is fictional guesswork as the four banter and spar, and as their mentor Phillips bemoans having sold Presley to RCA records and mega-fame, Perkins and Cash to Columbia, and while just beginning to groom Lewis himself. Elvis’ current girlfriend, Dyanne, chimes in, and son of a gun, there just happens to be a flawless drum and stand-up bass player on hand for Perkins’ set. For 98 minutes, they play a greatest hits revue while musing on the wildly different places they are in their careers.

Quartet Christmas is not pitched as a sequel, but a kind of even more fictionalized overlay of the same incident in which everybody sings some of their hits, but mostly versions of classic Christmas songs — some jazzed up with rock arrangements, some done as fervent riffs on religious ballads. The latter gives these folks from the same sharecropper fields of Mississippi and Alabama a chance to resurrect the religious milieu of their youth.

Gene Seyffer’s recording studio is back, this time with Jodi Dellaventura’s evergreen tree alongside the bandstand and some holly bunting atop the gold records and publicity photos.

Colin Scott’s script is even weaker than the one he originally wrote with Floyd Mutrux covering the same ground. Although its tone when the music isn’t playing is a bit quieter than the first version, it’s still a tale of loyalty, legacy, determination, pride, vulnerability, celebration, contemplation, ill feelings and change.

There’s a bit more muttering with everyone nursing old grudges and upcoming futures — Elvis fearing people will forget him while he’s in the Army; Perkins’ career spiraling downward after others have a hit with his “Blue Suede Shoes,” Cash still worried that his past sins will catch up with him, and Lewis on the first step of his career but insanely and vocally certain of his superiority. Referring to himself: “Jerry Lee has the talent and these boys have the scrapings.”

But you’re here for the music and does this group deliver: Sky Seals as the troubled Johnny Cash (he doesn’t sound a lot like Cash but he’s solid on his own merits); Jeremy Sevelovitz as the sulking country boy Perkins (an electrifying lead guitarist); Eddie Clendening (who looks a tad like Elvis with the slicked back hair, does sound enough like the Someday Will Be King and plays a fine guitar). Lindsey Corey amps up everything with her voice and her pizzazz as the girlfriend. Veteran Gregg Weiner is welcome back to local stages as Phillips.

And then there’s Miamian Dominique Scott, who doubles as music director and is credited by director David Arisco as a virtual co-director. This performer won the “Best Supporting Actor in a Musical” Carbonell Award for his 2016 performance of this eccentric creature.

Once again, there’s nothing tame about Scott’s unabashedly wild, wide-eyed Lewis. Scott sports mussed blonde hair and a colorful, stand-out costume to match Lewis’ large personality. He speaks and sings in an excitable, high-pitched voice. When he plays the piano, his body gyrates. What’s most impressive about this performance is that Scott conveys his character’s abandon without calling attention to himself. Whether hammering at the ivories and sweeping fingers down the entire keyboard, belting the vocal notes or subtly leading the harmonies, Scott’s Lewis is just a power plant packed into a writhing body. Deep into the music, his eyes seem to sink under his brow while still glowing and his gaping maw wrenches into a scowl.

Yes, there is “Chantilly Lace,” “Ring of Fire” and “Don’t Be Cruel,” but also “Santa Baby,” and “Boogie Woogie Santa Claus.” Elvis croons a surprisingly touching “I’ll Be Home For Christmas,” and there’s a moving recreation of the quartet’s countrified childhood with a medley of “Go Tell It On The Mountain” and “I Shall Not Be Moved.”

Props, too, to percussionist David Sonnenborn and bassist Jonny Bowler.

And as usual, do not leave the house when all the musicians exit the stage, leaving Sam Phillips to close up shop. A few moments later, the required encores leave the place a rockin’.