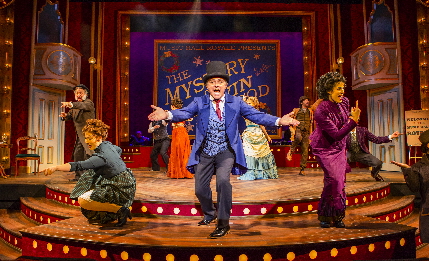 Some shows at the Maltz Jupiter Theatre are better than others. Some are gems; some have flaws. But there’s a dependable consistent quality to its work that bespeaks vibrance, polish and commitment independent of its generous budget and resources.

Exuding a lushness, attention to technical detail and an overarching sense of fun, its current production of The Mystery of Edwin Drood is a prime example of its skill at delivering an evening with few, if any, asterisks.

Proof is that the mid-week opening night patrons, not always the most spirited crowd, were happily clapping along to the tunes, even singing along when prompted, grinning as actors in the aisles interacted with them, and eagerly voting for when called upon.

For Drood is an unabashed celebration of classic entertainment for its own sake, embracing rousing production numbers, poignant ballads, over the top mugging, melodrama, silly puns, low comedy and breaking-the-fourth-wall audience engagement – all emulating the English music hall and American vaudeville.

This edition helmed by director/choreographer Jennifer Werner (Maltz’s The Wiz and Cabaret) and local music director Caryl Fantel features a cast of 11 inspired performers seemingly having the time of their lives, 13 if you count the dog (a Maltz veteran) and the ventriloquist dummy.

As usual, the mystery story comes to an abrupt stop because novelist Charles Dickens died before he finished it in 1870. The multi-talented Rupert Holmes wrote the score, lyrics, orchestrations and script in 1985 that allows the audience to vote on who will be lovers at the final curtain, who a detective really is and who the murderer is from among the characters on stage. In theory, there are 50-plus possible endings, all of which have to be rehearsed.

The original version, which bowed to Tony Award acclaim, had about 20 actors and ran 2 ½ hours. A few years ago, as the piece became a popular choice for budget-minded regional and community theaters, the cast was cut to 11 and the running time to about 100 minutes or so.

To be fair, this production – like others we’ve seen – tends to lose focus and punch as soon as Dickens’ narrative stops and the voting begins. The voting process is messy and disorganized enough that you can’t rule out Russian interference. But here, as with the others, the momentum ramps back up for a rousing finale, sending a sated crowd back to the parking lot humming tunes.

The acting corps, impersonating distinct characters in a 19th Century troupe along with the Dickens’ creations, have fine strong voices and effusive personalities. A few have appeared at the Maltz before and two are from Florida.

Richard B. Watson holds the show together with the indefatigable emcee and John Preator gets to use his sonorous baritone as well as his scenery munching chops as the schizophrenic John Jasper. Together, they nearly stop the show with the intense triple-patter duet “Both Sides of the Coin.” Autumn Hurlburt has a lovely mezzo-soprano as she disguises herself as the title character. Badia Farha brings a rich cabaret voice to Princess Puffer’s solos such as “The Garden Path To Hell” and the torchy “The Wages of Sin.”

Fantel has molded these voices with an expert hand and she leads the sterling nine-piece on-stage band. They certainly earn their paycheck: notice how much underscoring occurs independent of traditional musical numbers.

As usual, the Maltz designers shine in every department. The most obvious are Michael Schweikardt’s music hall set with three prosceniums, two boxes, and a riot of red flocked wallpaper, then Andrea Hood’s period costumes including ankle-length dresses adorned with frills, plus bowlers, cravats, vests and top-hats, and Gerard Kelly’s wigs with curled locks and muttonchops.

In all, it’s a shilling-bright sparkling holiday present, Dickens’ other Christmas carol.

To read an interview with some of the troupe, click here.