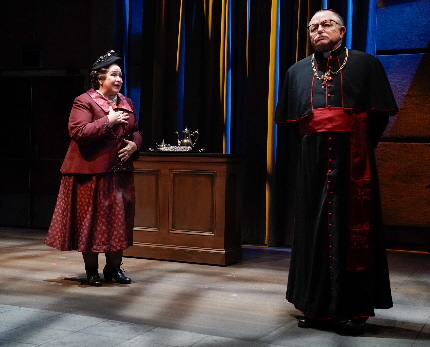 It’s tough to tell people who have been earnestly working on a show for 2 ½ years through readings and workshops that it still needs more work. But the world premiere of Joseph McDonough’s Ordinary Americans has enough promise and fine performances at Palm Beach Dramaworks that it’s worth the effort; it’d be a loss for audiences if they didn’t refine it further.

The story of indomitable broadcast icon Gertrude Berg fighting the strangulating plague of the blacklist in the 1950s carries a clear warning to audiences today that McDonough and artistic director William Hayes wisely allow patrons to draw themselves.

While Berg – the actress, creator, producer and writer of the hit sitcom The Goldbergs — is the central fulcrum and driving force of the narrative, McDonough’s play is as much, maybe even more so about a social-political time with inescapable resonances about censorship, fear, corporate cowardice and repression.

This co-production with GableStage is blessed with the central performance of Elizabeth Dimon, who first suggested the work. She captures both the homey maternal Jewish Molly Goldberg in a kitchen apron learning out the tenement window to hail the neighbors and then in a blink of an eye becomes the assured, accomplished sophisticated artist who wears a mink-collared coat.

Directed by Hayes, she is especially effective portraying a strong spirit, justifiably proud of what she has accomplished, discovering that her power and influence cannot prevail over anti-Communist hysteria. When her friend and co-star Philip Loeb is cited in the Red Channels pamphlet as a Communist because of his outspoken union activism, she fights a losing battle with CBS suits to keep him on the show.

Initially, the born fixer cannot envision a problem she can’t handle: “If the bomb falls, I’ll deal with it.” She, Loeb and the others have difficulty believing in the depth of the country’s willingness to abandon its principles, running contrary to America’s image of itself.  After refusing to fire Loeb, the highly-successful program is cancelled. She tirelessly goes from corporate door to door seeking support. Abasing herself, she even ends up begging the powerful but unresponsive Cardinal Spellman. By the time McCarthyism is fading, her kind of warm ethnic comedy has given way to the generic I Love Lucy.

The problem is with the script: As the actor Edmund Gwenn said, dying is easy; comedy is hard. But even harder to land just right is the historical play.

McDonough is caught between two conflicting needs of two audiences. For those for whom all of this new ground, or at best something they only knew vague outlines, the playwright has to dump in tons of exposition. The talent to subtly feather it into a dramatic arc is something very few playwrights have ever mastered. At the same time, a large portion of Dramaworks audience knows all too well who Molly Goldberg was and the tragedy of the Red Scare and need no education slowing the story. (Indeed, the show has already been extended and some performances are sold out for audiences who treasure recollections of Molly Goldberg calling out “Yoo hoo,” uttering malapropism and unabashedly pitching the sponsoring Sanka coffee in the middle of a storyline.)

What neither group knows well is who the real Gertrude Berg was behind the scenes – a savvy and prolific pragmatist who had the second-highest rated show on the network. It’s that Berg who is fascinating, especially as she fights head to head with sponsors and executives. But other than a couple of introductory scenes, we get bogged down in lengthy recreated excerpts from her programs. They are charming and will spark memories for many in the audiences, but dramaturgically they could be deeply trimmed. It will be 20 minutes before we see the Gertrude Berg the play is about.

Similarly, the dialogue where McDonough has the characters setting the context and background feels constructed; the cast can never quite get around that “informational feel.” Where the cast and Hayes score is when the characters inhabit the emotional angst and cost just as they would if they were acting in a fictional play.

David Kwiat has to deal with a lot of the exposition, but he explodes in a surreal re-creation of his tortuous testimony before the House Un-American Activities committee. Margery Lowe is Berg’s faithful assistant and also an actress on The Goldbergs; Rob Donohoe is actor Eli Mintz and the implacable Cardinal Spellman, and Tom Wahl is CBS chief Frank Stanton and General Foods exec Roger Addington.

Hayes deserves honor for having spearheaded this new work as part of the company’s mission and he has worked alongside McDonough for years developing this piece. As a director, he elicits those fine performances although the physical staging is often quite static, especially in confrontations.

Dramaworks’ designers have done their usual fine job: Michael Amico’s grey broadcast studio lit by Christina Watanabe, with period perfect costumes by Brian O’Keefe. Kudos also to Dramaworks for its extensive material in the program detailing the infamy of the blacklist and listing some its more prominent victims. The theater lobby is also adorned with a score of posters warning of the Red menace.

What McDonough and Hayes have succeeded at so well is capturing the bafflement of Berg and Loeb at what is happening. Like many people today, they know the country isn’t perfect; they know some of the value are ideals, not actuality. But the character of many of their fellow Americans, the core of the country they love has changed before their eyes and the noose has closed around them before they realized it had.

Ordinary Americans plays Dec. 6 –Jan. 5 at Palm Beach Dramaworks, 201 Clematis St., West Palm Beach. Performances are 7:30 Wednesday-Thursday and some Sundays, 8 p.m. Friday-Saturday, 2 p.m. Wednesday, Saturday and Sunday and Dec. 26. Regular individual tickets $77, student tickets $15, and Pay Your Age tickets are available for those 18-40. Call 561-514-4042 or visit palmbeachdramaworks.org. The work will move with most of the cast to GableStage January 18 – February 16.

To read an interview with McDonough, Hayes and Dimon, click here.