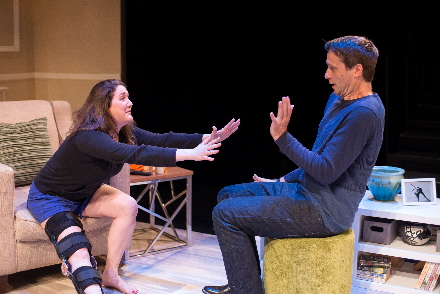 Lindsey Corey tries to get Caleb Scott to dance in Dancing Lessons from Zoetic Stage / Photos by Justin Namon.

This comic drama charts the pas de deux of differently afflicted souls: a Broadway dancer willing to risk a potentially fatal surgery to correct damage from a car accident, and a brilliant high-functioning autistic college professor whose socially-crippling Asperger’s Syndrome has isolated him from any meaningful human contact.

These neighbors in a New York apartment building collide because the teacher is receiving an award and he expects he will be asked to dance at the reception. Not only does he not know how, but he can’t stand to be touched.

So he offers $2,153 for a lesson from the sidelined dancer, a virtual stranger who only wants to be left alone to cope with the prospect of never again being able to do what she has defined herself as.

Playwright Mark St. Germain, who loves two-character scripts like Freud’s Last Session and Scott and Hem in the Garden of Allah, has created a particularly Odd Couple. Both are inept dealing with people on a meaningful and lasting basis. Both have an ocean liner’s worth of baggage more restricting than the braces around the dancer’s shattered leg.

Ever Montgomery may be a Professor of Geosciences at the New York Institute of Technology, but he is also coping with Asperger’s Syndrome. He sees things only in black and white provable observations. Without much ability to appreciate subtlety, he rarely understands a joke. He is frequently overwhelmed because he can’t sieve out multiple stimuli. It has made him an outsider with little hope of becoming any more of a functioning social individual than as a college lecturer.

The somewhat sardonic Senga Quinn is depressed because she fears the damage from being struck by a taxi will rob all meaning from her life, to the point that she is avoiding family and friends. She is even more a disconnected outsider who realizes she has hid from life by focusing on her craft.

But over several skirmish-like visits, the two reluctantly share bits of their past. They don’t exactly bond, but they come together in glancing fleeting moments that teach each that they need to turn a corner in their lives.

The script itself isn’t much of a barn burner on an emotional level, although there are many witty lines. Fortunately Zoetic has its master director Stuart Meltzer working with the ever-enchanting local Lindsey Corey and talented out-of-towner Caleb Scott. As quirky and prickly as these characters are, this trio makes them engaging to the point that you are cheering them to conquer their demons.

The most noticeable achievement is how Scott physically and vocally inhabits Ever’s exterior and interior afflictions — the stooped shoulders, arms held straight down with clenched fists, angular awkward body movements as he incessantly paces rectangular paths, an inability to look at anyone, a breathless voice indicative of thoughts flying faster than lungs and larynx can keep up with – a herky-jerky skittery stork. Clearly, he did study such people’s affect. But Scott also exudes Ever’s inner discomfort in a world he is terrified to navigate.

Scott, Meltzer and St. Germain want you to laugh at Ever’s plowing blithely into social faux pas, especially his blurting out painfully blunt observations, but they do not in any way make fun of Ever’s condition.

Corey is one of the region’s emerging treasures. She won the Carbonell for an anguished immigrant mom in Stripped for Zoetic but she can do broad comedy like the roller disco goddess in Slow Burn’s Xanadu. Her round open face wins over an audience instantly even when playing a caustic person keeping the world at arms lengths. If her emotionally repressed role isn’t as showy, Corey/Senga’s quiet amusement at Ever’s actions provides a crucial counterbalance.

While Senga never escapes her brace except in one scene, the couple do make droll attempts to dance. And at the risk of a spoiler alert, Zoetic veteran Jeni Hacker has choreographed a Fred-and-Ginger routine for them guaranteed to elicit that smile.