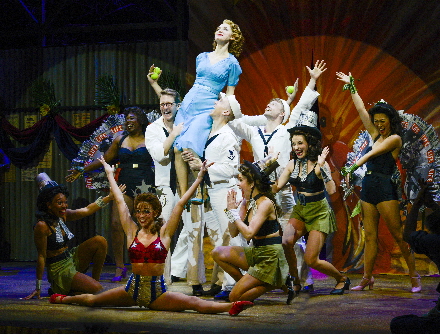 Only a few shows are in the running for the best “classic” American musical of all time. Depending on your criteria, Guys & Dolls is in close competition with Gypsy, among others.

But the Maltz Jupiter Theatre’s nearly flawless production with a gloriously delivered score and nuanced script is a reminder that South Pacific is a contender as one of the most affecting and best constructed examples of the genre.

Knowing the potential, the Maltz has poured everything it has into this stirring evening including a luxuriant 11-piece orchestra to make love to Richard Rodgers’ iconic music and a 28-member cast to caress Oscar Hammerstein II’s brilliant lyrics as well as do justice to the very adult script by Hammerstein and Joshua Logan. No raindrops on roses here.

But there’s more here than resurrecting cherished memories of many, many past productions. Director Gordon Greenberg does not reinvent the piece but emphasizes a barely perceptible darker ambience of love struggling to survive the chaos of war. In our own time of uncertainty, Hammerstein’s theme comes clearer than ever of having the courage to take a chance on love and life when it presents itself and to not let transient petty concerns stand in the way.

For instance, when Bloody Mary sings “Happy Talk” to her daughter Liat and the deliriously ill but emotionally ravaged Lt. Cable, it’s not some cute Pollyanna number used to change up the mood; it’s the mother’s last desperate plea to the soldier to put aside his prejudices and surrender to Liat’s love and a future together.

Greenberg and his cast’s skill is evident early on. In the second scene, the audience is introduced to Emile De Becque and Nellie Forbush. Because we are meeting them for the first time, productions often struggle to make credible their seemingly instant attraction and the whirlwind romance of two completely different people suddenly declaring adoration for each other.

But the director and actors here key on the line in the dialogue that the couple have been seeing each other for two weeks and we are eavesdropping on the linchpin evening they needed to admit their feelings to themselves and then to each other. That requires the actors establish a chemistry between the characters before the curtain rises, a key difference between professional and amateur performances.

For the theatrically-illiterate, South Pacific is a 1949 blockbuster with a soaring melodic score by Rodgers, lyrics by Hammerstein that only sound simple, source material from short stories by James Michener, and an affecting script so well-constructed by Hammerstein and director Joshua Logan that it won the 1950 Pulitzer Prize over Member of the Wedding and Come Back Little Sheba.

All of that was kept intact and augmented for Bartlett Sher’s memorable 2008 Lincoln Center revival with Kelli O’Hara that trusted the emotional content and technical craftsmanship of the material. Those facets have made it a staple of regional and community theaters across the country, including South Florida. 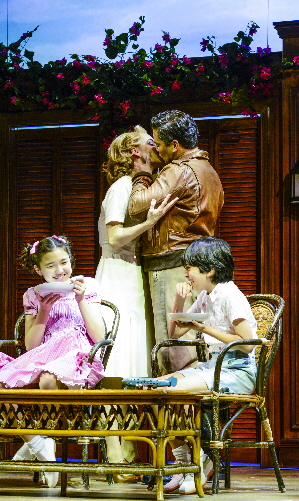 The story traces two unlikely romances played out on a Navy base during World War II. One pair is Nellie (Erin Davie), an ebullient and open-hearted Navy nurse from Little Rock, and the older cultured French planter, Emile (Nicholas Rodriguez) with a couple of secrets. The other is between Lt. Cable (Stephen Mark Lucas), a Philadelphia Brahmin sent to recruit de Becque for a chancy mission behind enemy lines, and Liat (Shea Renne), the lovely young daughter of the Tonkinese entrepreneur Bloody Mary (Jodi Kimura). Racial prejudices intervene in both relationships and must be resolved one way or the other before the final curtain.

Rodgers and Hammerstein were sophisticated urbanites immersed in the rough and tumble pragmatism of Broadway theater. But both men, Hammerstein particularly, unabashedly believed in the purity and power of romance and love. South Pacific’s warm flowing and straightforward endorsement is among the secrets of its lasting success.

Musical Director Eric Alsford and Greenberg insist that these actors — each one a fine singer – do not simply deliver familiar standards, but find ways of communicating the underlying emotions. For instance, often baritones singing such standards as “Some Enchanted Evening” and other classics just stand there and blast out the back of the auditorium. But Alsford allows Rodriguez to alter the volume and lean in on the expressiveness of the song, thus creating an intimacy between the audience and De Becque’s inner turmoil.

Throughout the book scenes, Rodriguez and Davie create creatures desperately attracted to each other but terribly afraid that their differences make them unlikely soulmates doomed to rejection. Early on, the self-described Arkansas hick doubts that she could possibly be attractive to this suave handsome mature man. Across the stage, De Becque doubts this older man with baggage can possibly be attractive to the vibrant Nellie.

But Davie’s Nellie is instantly lovable with her warm, generous but discomfort at being a fish-out-of-water fish. Watch Rodriguez/De Becque’s face become as enthralled as a schoolboy with a crush on the teacher as Nellie sings “A Cockeyed Optimist.”

Lucas succeeds in making Cable a three-dimensional character weary of front-line warfare from the moment of his first appearance (in many productions, stiff actors don’t make him feel real until the second act). Similarly, many productions fail to make Bloody Mary anything but a funny caricature, but Kimura invests her with street smarts that warn even the best conditions can change and a survivor must always be hustling, illustrated by her manipulatively sensual seduction “Bali Hai.”

The show’s much-lauded depiction of prejudice’s ability to cripple true love has been problematic for liberal theater-going audiences to believe for a least a generation, even though we know it is absolutely accurate to the times. Even this production cannot overcome that, although Davie and Lucas come close.

The large cast includes Christian Marriner as a younger, bawdier Luther Billis, Peter W. Galman as base commander Capt. Brackett, Ray Zurawin and Hana Robert as DeBeque’s children, and many others as the a chorus of carousing Seabees and nurses.

Greenberg’s staging is cinematic smooth and, like a magician skilled in misdirection, his fluid scene changes often occur when you are looking at characters entering or leaving through the aisles.

Alsford has molded that superb orchestra and given it a more muscular sound than you usually hear. As always, the Maltz creative team is among the best, especially the lighting and projection design by Rob Denton. The extensive costuming included some designs from the recent revival.

Overall, the result was… no, resist it… I can’t…oh, well, an enchanted evening.

(To read a feature about this production, click here )