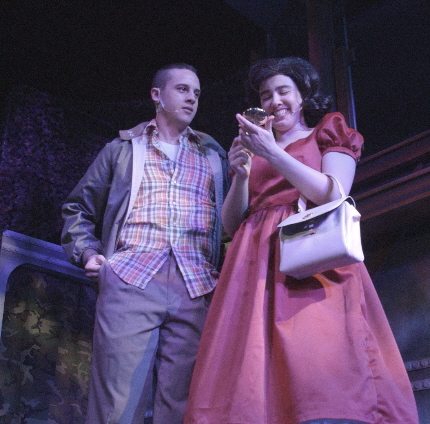 In the same way that Slow Burn Theatre Company’s artistic director Patrick Fitzwater has a good eye for spotting performance talent, he also is savvy at identifying worthy new composers and lyricists. Sometimes, however, his ability to select satisfying material fails him.

While still in their 20s, Benj Pasek and Justin Paul put themselves squarely on the musical theater map by adapting a hard-edged, improbable romance film called Dogfight. Small in size but large in ambition, it arrived off-Broadway two-and-a-half years ago to substantial acclaim for their writing promise. Pasek had arrived on Broadway year earlier with the winning holiday romp, A Christmas Story, and the two of them are New York-bound later this season with the critically admired Dear Evan Hansen. Clearly these are writers with a big future.

Dogfight earned attention from Fitzwater who – with a couple of compelling discoveries in the leading roles – has mounted the show with his signature energy in the Broward Center’s Abdo New River Room.

Its appealing score ranges from a 1960s pop sound to ersatz Sondheim, with lyrics that brim with emotion. Listen to the catchy duet, “First Date/Last Night,” with its bouncy, often-repeated verse and just try to keep it from rattling in your head. Nevertheless, the show’s central relationship between a young Marine soon to ship out to “this little country near India they call Vietnam” and a gullible, insecure diner waitress defies the minimal credibility of a musical.

That Marine is Eddie Birdlace (Alexander Zenoz), one of three tight-knit recruits – along with Bernstein and Boland — that call themselves The Three Bs. (Birdlace is the most dimensional of the trio, he being the only one afforded a first name.) The year is 1963, combat duty lies ahead for them, but before they go they throw themselves a party culminating in a mean-spirited, winner-take-all wager dubbed “dogfight.” Unbeknownst to their dates, they are being secretly evaluated on their looks, with the Marine escorting the ugliest girl pocketing the cash.

When Eddie encounters Rose Fenny (Hannah Benitez) at her mother’s diner, he feels like he struck gold. Socially awkward and plain-faced – though hardly fat, as described in a lyric – Rose blossoms to his attention and she warily agrees to going to the party with Eddie.

There, however, she learns of the bet and lashes out in anger at her date. Underwritten and unexplained is why Rose softens again to Eddie after intermission. Worse, as he leaves for overseas, his actions are so crass that we lose all emotional investment in them having any future together. Peter Duchan’s script, which follows the film’s screenplay quite closely, explores the nature of ugliness. If not conventionally pretty, Rose has transcendent interior beauty, in distinct contrast to Eddie’s inner misogyny. An epilogue suggests there is hope for their relationship, but it remains unpersuasive.

Although the performances can only partially counteract the plot, Fitzwater has another standout discovery in Benitez. She brings a touching vulnerability to Rose, a wounded bird who nevertheless has a powerful singing voice, notably on the hopeful “Nothing Short of Wonderful” and the bitter first act finale, “Pretty Funny.”

Zenoz, seen previously in Pasek and Paul’s song cycle Edges at Slow Burn, tries to muster some sympathy for Eddie, but at least demonstrates vocal force from his opening number with his Marine buddies (“Some Kinda Time) to his post-war “Come Back.” Mike Westrich – the production’s sole Equity performer – and Christian Vandepas lend solid support as Eddie’s sidekicks, while Alexa Baray needs to dial back the stridency as a hooker brought to the party to rig the dogfight.

Scenic designer Sean McClelland harnesses the challenging wide-and-shallow Abdo stage nicely and Rick Pena’s costumes are on-target in evoking period and personality. A month ago, as he introduced his production of Big Fish, Fitzpatrick pointed out with pride the live musical accompaniment, so it is disappointing to see him settle for recorded sound for Dogfight. That may be due to a limitation of the space, but it is reminiscent of Slow Burn’s beginnings five years ago, when it started out with canned music and soon realized the error of that approach.

As a theater devoted to exploring less well-known musicals, Slow Burn will occasionally stub its toe on a show like Dogfight, which has elements to admire but refuses to coalesce into a satisfying whole. Fitzpatrick’s military choreography is muscular and macho and his cast is appealing, even if the show leaves a sour taste in the mouth.