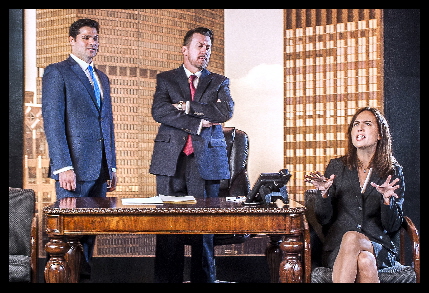 Gordon Gecko had it wrong in the film Wall Street that “greed is good”, at least in the view of some expensively tailored and coiffed players in Sarah Burgess’ bitterly funny indictment of 21st Century business ethos, Dry Powder.

Greed isn’t good or bad. It just is. The pursuit of wealth and power for their own sake is an unarguable fact of life as inexorable as gravity.

GableStage’s excoriating 80-minute tour that delves deeper and deeper into the barren ethical landscape is an unsparing drama whose copious humor comes from one character’s blithely limitless ability to do anything to maximize the bottom line with absolutely no concern for the human cost of her proposals.

Burgess’ well-researched 2016 script is jammed with the indecipherable insider jargon and Byzantine fiscal strategies of private equity traders who scoop up vulnerable companies, build them up and then sell them at a profit.

But you don’t have to be able to follow the lingo or the twisting proposals to understand what’s happening, in part because the characters repeat the stakes often enough to comprehend, and in part because the play is really about the collision occurring when making the most dollars runs irreconcilably into more compassionate concerns. One character wants to do both, but his advisors fall into starkly divided world views.

Rick (Stephen G. Anthony) is the proud hard-charging founder of a slick successful private equity firm with an office overlooking central Manhattan. But, echoing a real life incident, Rick hosted an ostentatious engagement party complete with an elephant on the same day his firm laid off scores of workers at a grocery chain he just bought.

Trying to repair the damage to a reputation which can attract or repel investors, he is intrigued by a too-good-to-be-true deal offered by one of his two managing directors, Seth (Alex Alvarez). It involves a bit of risk in buying up a venerable luggage manufacturer, modernizing its operation as its aging founder retires and then selling its new product lines online. Seth is no blameless naif, but he believes in keeping his word and minimizing harm where possible.

But if Seth is the humanistic angel on Rick’s left shoulder, on the right is Jenny (Katherine C. McDonald), a calculating workaholic who believes the most lucrative option is to gut the company assets, fire everyone at the California base and outsource   production to Bangladesh. She can’t be called conscienceless because conscience does not and never has entered her calculations. Jenny is a brilliant creature who does not just think outside the box, but sets the box afire with a flamethrower. When Jeff talks about how he and his execs volunteer at a soup kitchen, Jenny is genuinely baffled at what possible edge that could gain for the company spreadsheet.

A bitter tug of war ensues between the execs for Rick’s go-ahead and his soul. Seth, who is a tough-minded businessman himself, and Jenny are bright and witty opponents whose viciously snarky verbal sniping is simultaneously hilarious and unnerving. Rick wants to be “a good guy” avoiding layoffs where possible, but he is a denizen of the rarefied world where compassion cannot be factored into a profit and loss statement. His decision is not a forgone conclusion.

Representing the interests of the family-owned business in play is the company’s second-generation CEO Jeff (welcome back to the stage Robert Strain).

The play is not meant to be deadly serious or naturalistic; Burgess and director Joseph Adler unapologetically go for the jugular knowing full well that the characters and their philosophies are somewhat exaggerated proves nce as if Jonathan Swift was penning the dialogue.

All of the actors inhabit their characters’ flaws fearlessly, especially McDonald, although she has an incessantly high-pitched voice that wears a bit thin. Alvarez proves again what a wide range he has and Anthony is, as always, perfectly convincing as the conflicted decision-maker.

You can almost see Adler grinning as he directed this royal skewering with its rapid fire dialogue and careening pace. He clearly savors depicting these people who, looking down on the world through floor-to-ceiling picture windows, acknowledge that they live in a different world from everyone else, such as loser peasants who resent their hard-earned success.

“Dry powder” is business slang for the available capital that a private equity firm has available to spend on projects. But it’s also a wry commentary on the moral wasteland inside these so-called people.