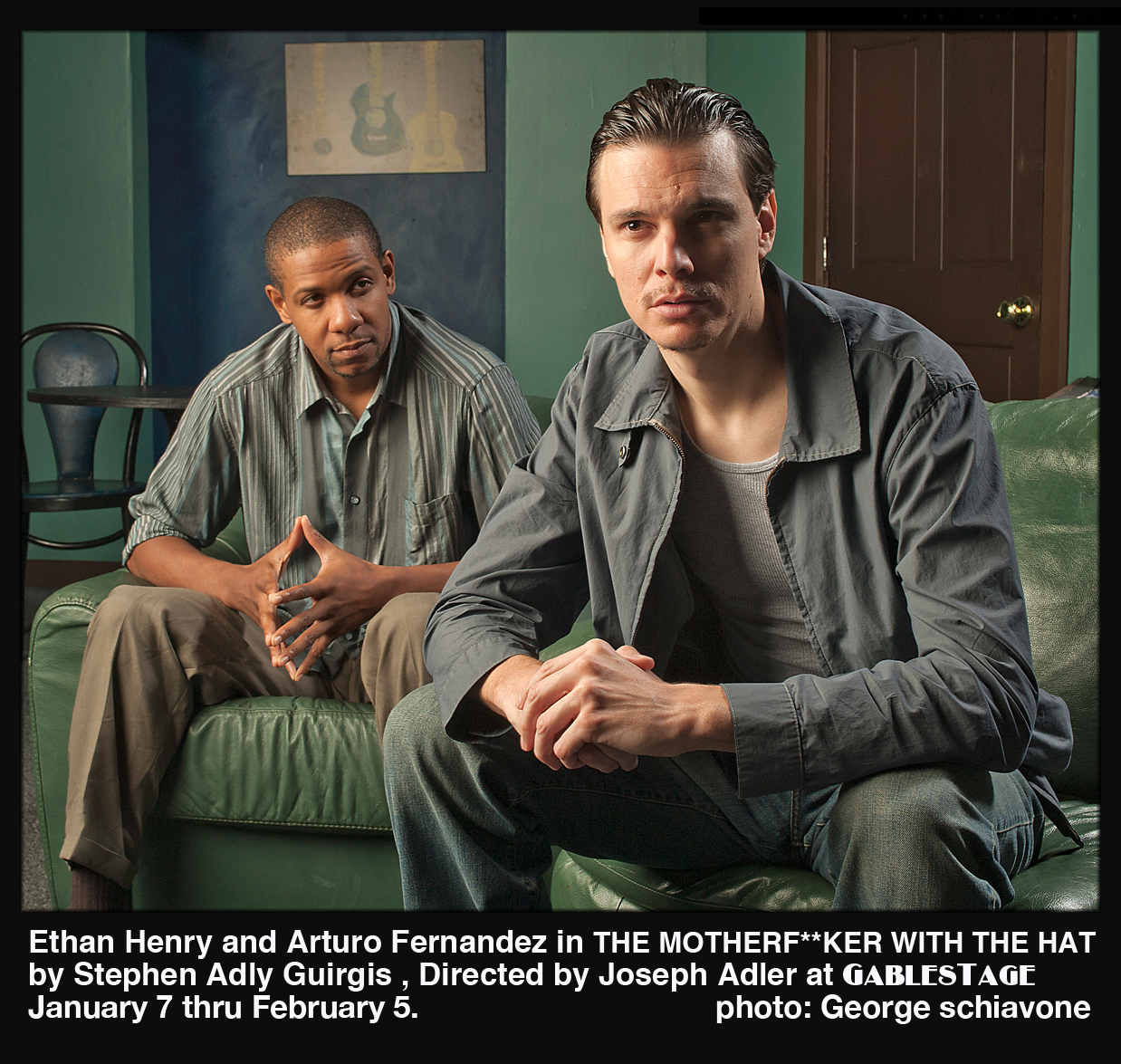 The surprise about GableStage’s The Motherf**cker With The Hat is that hidden inside the torrent of obscenity-drenched street-speak, obscured by the selfish view of satiating sex, beneath the plentiful urban humor lies a fiercely moral tale about trust and betrayal, love and hope.

Stephen Adly Gurgis’ rollicking comedy clothes these profound human issues in a profane, gritty world whose protagonists not only don’t know who they really are, but who would never imagine themselves standing in for humanity — in a f**kin’ play, for f**k’s sake.

Joe Adler’s propulsive direction of a deceptively skilled cast delivers a jaw-dropping production with an avalanche of verbiage and concepts worthy of Stoppard by way of Mamet.

Gurgis, a master of urban theater in Jesus Caught the A Train and The Last Days of Judas Iscariot, depicts an underbelly of self-destructing losers, drug addicts and petty criminals whose sexual couplings or male bonding threaten to turn violent at any moment.

Dim-witted but earnest street punk Jackie (Arturo Fernandez) has just finished a 26-month sentence for dope dealing. He is desperately, desperately trying to stay sober and reboot his life. We meet him in the throes of pure joy because he has won an entry level job that validates his fledgling self-rehabilitation.

He doesn’t see that his primary roadblock is the girlfriend he adores, the sexy but street-hardened Veronica (Gladys Ramirez). He struggles to stay clean for her even though she remains addicted to coke, booze and one other vice we learn about later. Jackie’s faith in their idyllic relationship is shattered when he finds a man’s hat in her apartment that does not belong to him – as well as Aqua Velva and a fresh carnal scent on the bed sheets. Their ecstatic cooing instantly spins into an excoriating screaming match.

He runs for help to his AA sponsor, Ralph, who has created an aggressively healthy lifestyle with his wife (Betsy Graver). The hyper-articulate counselor lays out what sounds like insightful advice forged in the crucible of his own hard-won recovery.

But we discover that no one is who they seem, starting with Jackie who we realize is a master at rationalizing a catalog of his own continuing bad behavior, such as infidelity, to support his self-image as a good person. This is pointed out by his wise and flamboyant cousin Julio (Alex Alvarez) who offers to provide backstreet muscle to solve some problems as well as the soundest advice in the play.

The plot is punctuated with a series of betrayals initially masked by plausible spiels. Jackie begins to question who he can trust and how can you live a decent life if, indeed, there is no one you can trust, not even yourself. Gurgis’ genius is answering that question (oblique spoiler here) in a riff on Polonious’ advice to Laertes.

Offering only a few moments of respite, Adler propels this 95-minute juggernaut and its white water rapids of words with the unimpeded velocity of an experimental racecar on the Bonneville flats. Once again, he miraculously holds our attention even though characters just sit around talking to each other for nearly entire scenes. We feel like we are eavesdropping from another chair at the kitchen table. Perhaps it’s that the GableStage auditorium is so intimate that we feel we are watching a closeup in a film.

Some audience members will be overly offended or too amused by dialogue so soaked with obscenities that it underscores the characters’ inability to express themselves otherwise. Gurgis doesn’t strategically drop F-bombs; he’s loaded an inexhaustible Gatling Gun with them.

But at the risk of sounding pretentious or overwrought,  Gurgis has written repartee and even arias that border on lyrical poetry – we just aren’t going to quote any of it here. As with Shakespeare, Gurgis repeats words and phrases in kaleidoscopic combinations that turn in on themselves, sometimes changing their meanings as he goes. For instance, Jackie has a riff on how he lives by a code that corkscrews like Hamlet’s penultimate “The readiness is all” speech. Seriously.

Given these complex rhythms, Adler’s other triumph is eliciting a smoothness of delivery from every single actor who subtly deliver Gurgis’ lyric if obscene poetry.

Fernandez, once again, creates a character nearly unrecognizable from anyone else he’s played before such as the lovelorn cowboy in Alliance Theatre Lab’s Fool For Love or the faux yuppie brother in On An Average Day. His fluency in Gurgis-speak may derive from his experience as a founder of the scrappy Ground Up & Rising troupe that has presented two of Gurgis’ works. Fernandez invests a dopey innocence and even a prevailing sense of honor in this self-deceiving low-wattage criminal. He also invented an idiosyncratic speech pattern for Jackie that echoes a perpetual yearning for something better, usually by driving a slightly hoarse voice into an upper register at the end of a line. The sole problem is that this sound eventually becomes grating and overly repetitive halfway through the play.

Ramirez is another surprise as the sewer-mouth girlfriend, considering her role as the sweet Cuban sister with a sunny disposition in Promethean Theatre’s The Bearded Lover. She excels as someone who long along subscribed to the cynical get-yours ethos of the street and pledged never to get fooled again at any price.

Henry, the only non-local actor, invests Ralph with his own convincing definitions of charm, intelligence and quick wit that bear no resemblance to the persona of Chris Rock who played the role on Broadway. Like almost every character in the play, he is as successful conning himself with self-justification as everyone around him. He deftly negotiates Ralph’s Byzantine dialogue with its rapid-fire barrage of wisdom and self-serving rationalizations that sound treacherously alike.

Alvarez pulls off an especially tough challenge. Julio speaks like Issac Mizrahi with a thick Puerto Rican accent, two broad stereotypes mashed into one. Yet he makes the cousin not only believable, but credibly makes him the only thoroughly admirable altruist in the story.

Graver only has one major scene, but she pours out her character’s pain in lashing diatribes of frustration at Jackie’s blindness.

Even with an ambiguous ending (Gurgis is incapable of writing a fairy tale), Motherf**ker kicks off the theatrical new year with yet another don’t-miss show for broadminded audiences looking for thought-provoking fare.

An editorial note prompted by this week’s opening nights at Motherf**cker and Palm Beach Dramaworks’ The Effect of Gamma Rays on Man-in-the-Moon Marigolds: I know today’s audiences feel the need to release their pent-up reactions immediately, hence the rude conversations during a performance and the de riguer standing ovations. But I’m getting really tired of people who feel compelled to applaud in the blackouts between scenes of a straight play, spoiling fellow audience members’ attempts to lose themselves in the fantasy of the moment or to process what has just been seen. Stop it!
The Motherf**cker With The Hat runs through Feb. 5 at GableStage, at the Biltmore Hotel, 1200 Anastasia Avenue, Coral Gables. Performances are 8 p.m. Thursday-Saturday, 2 and 7 p.m. Sunday. Tickets are $35 to $50; students $15. Call 305-445-1119 or visit www.gablestage.org 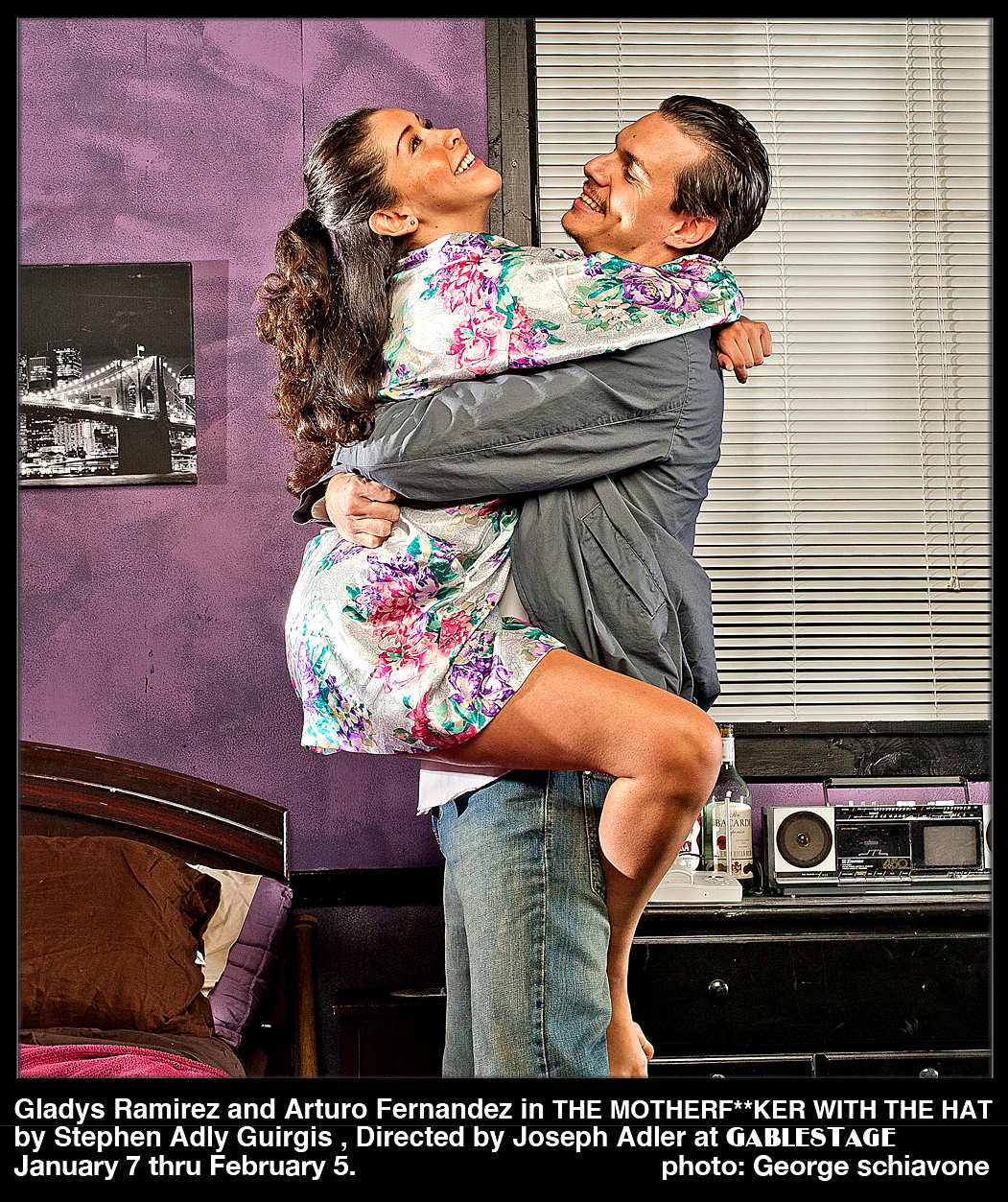