‘Glitter And Be Gay’ Proudly At Slow Burn’s Outrageous Priscilla 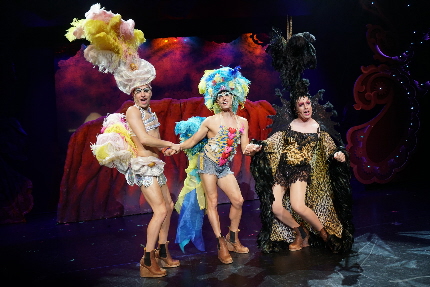 Kyle Laing, George Pellegrino and Micahel Ursua let it all hang out in Slow Burn Theatre’s Priscilla, Queen of the Desert / Photos by Rodrigo Balfanz

Intentional or not, Slow Burn Theatre Company producing Priscilla, Queen of the Desert at the height of Pride Week, near the 50th anniversary of the Stonewall riots,  is the ultimate synergistic commentary.

That’s because Slow Burn’s edition of the reliably infectious feel-good musical rises another level into a conscious celebration of identity. Indeed, pride unfettered and unabashed explodes with the pure joy over a public proclamation of who you are, with no fear of reproof or restraint. And it sends its message with love, compassion and a whole lot of plumage.

First developed more than a quarter-century ago, Priscilla still resonates at this moment when wide-spread burgeoning acceptance of the LGBTQ movement in mainstream society is still struggling against persistent homophobia across a large swath of this country and its legislatures.

As theater, this is not a perfect production. But so much talent, skill, energy and entertainment pours off the stage that it wipes away nitpicking with a cornucopia of visual and aural treats. The gifts range from an endlessly imaginative tsunami of spangles and feathers to the enthusiastic deployment of every disco earwig you can think of off the top of your head.

Like the original 1993 film, the 2011 musical’s plot concerns two drag queens and a transgender woman on a road trip across the Australian outback from Sydney to a small town. Tick, known onstage as Mitzi Mitosis, gets a call from Marion, the wife he has been separated from for several years. She asks Tick to provide a fill-in act for her casino/club in far off Alice Springs. As an added incentive, she notes that his eight-year-old son Benji has been asking to meet him for the first time.

They take off in a dilapidated “budget Barbie campervan” that they nickname “Priscilla, Queen of the Desert,” filled with glittering costumes and topped off with a huge silver spangled high heel shoe on the roof. The trek punctuated with teasing, bickering and bonding does win converts in surprising places as well as encountering bigots in an odyssey during which each performer learns a good deal about themselves.

The entire show is meant to be a self-conscious meta-heavy hoot. Many of the disco and pre-disco classics are performances strutting before the trio’s audiences, such as “I Love the Nightlife.” Many others are woven into the plot with a broad wink at the audience for the imaginative positioning. For instance, the use of “MacArthur Park” will, for those over 55 years old, be one of the funniest moments in the show. Or the anthem “Don’t Leave Me This Way” is the raucous hymn at the funeral of Bernadette’s husband. But there is a deep commitment to sentiment and heart throughout, such as the use of Tick’s “I Say a Little Prayer” thinking of his son.

The script by Allan Scott and the film’s screenwriter Stephan Elliot is delightfully crammed with sex-drenched deep blue one-liners such as “That’s as gay as Gloria Gaynor’s back catalog,” or “Did you know it’s a violation of the local sodomy laws to walk around with your head up your ass?”

They also have provided hilarious sight gags such as a frustrated former exotic dancer popping ping-pong balls at her audience out of her… well, maybe this show is going to force parents to have a long explanatory talk with their kids on the way home.

Director-choreographer Patrick Fitzwater and musical director Anthony Campisi imbue everything with that aforementioned pride, joy and an overarching sense of let’s-just-have-a-really-good-time.

That joie de vivre burbles out of every member of the cast. George Pellegrino as Tick is a Fort Myers hair salon operator who admits he hasn’t been on stage in ten years but who has an extensive resume in the performing arts. No matter. His soulful singing voice and sad eyes give his character the needed depth to win over the audience.

Kyle Laing’s Felicia has an energy that kicks the show into overdrive whenever he appears, whether it’s seen in his knife-sharp execution of dancing moves, his scorching hot “Venus”  or his wonderfully silly miming to an aria from La Traviata. (Why? Mary, don’t ask.)

Michael Ursua has the toughest role as Bernadette because the character in late middle-age, world-weary chastened by life, has decidedly less pizzazz than anyone else on stage. That’s the role.  But Ursua brings everything in his considerable repertoire previously seen when he was the lead in Slow Burn’s The Secret Garden and his benchmark ZaZa in MNM’s La Cage aux Folles. His impassioned “Don’t Leave Me This Way” at the funeral is a solid hoot.

Other standouts are Elijah Word as the emcee Miss Understanding; Johnbarry Green as Bernadette’s longtime fan, van mechanic and possible love interest; Resa Mishina as that lover of ping pong; Shelley Keelor as Tick’s wife and who like everyone in the cast slips into the ensemble; Nayomi Braaf, Rebeca Diaz and lead singer Carla Bordonada as a trio of divas serving as a Greek chorus, and Brayden Labgold-Carroll as Benji.

Credit is due the rest of the committed ensemble who make a score of quick costumes changes each act: dance captain Jerel Brown, Joshua Conner, Jonathan Eisele, Cameron Hale Elliot, James Giordano, Milton Mendez, Sahid Pabon, Mason Zaroff and Nicole Kinzel who gets leadoff solos such as “I Love The Nightlife.” 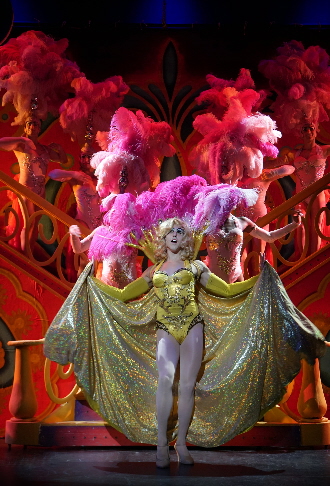 Okay, so a few words about those costumes, Okay, maybe not a few because there are not enough words to adequately describe the way, way past outrageous parade of what has to be more than a hundred sartorial outfits. There’s a dress made out of purple and orange flip flops, leather strap outfits that expose butt cheeks, towering headgear not seen outside of a Star Trek episode, high heels built into yellow scuba diver’s flippers, and in quick succession Christmas trees, koala bears, kangaroos, and flying dragons.

A store-full of wigs are on display– beehives, falls, a shako-like assemblage in electric plum. Additionally, half-masks with elaborate eye makeup painted on them make it possible for nearly instant facial changes.

On what runway did these bizarre items originate? The Broadway production’s Tony-winning wardrobe was designed by Tim Chappel and Lizzy Gardiner. It was adapted for the national tour. Those costumes were bought by Theatrical Rights Worldwide, a company that also licenses the show itself and had been renting out the costumes. But then the costumes were bought by… wait for it … Marilyn Wick, whose locally-based Costume World Theatrical is one of the largest providers in the country. Fitzwater (who doubles as the wig guru) and Slow Burn’s master costume designer Rick Pena spent uncounted hours picking and piecing together what appeared on stage.  The scenery including the battered bus also was rented.

There are weaknesses in this production – and maybe the piece itself. The brief depictions of homophobia, violence and fear don’t land solidly, undercut by the cheery fantasia surrounding it. Further, everyone on stage has a fine full voice, but some notes at the top of the register escape almost everyone at one point or another, even with the finest singers. Some moments are staged too fast to be credible, such as the inexplicable change of heart when the denizens of a goat-roper bar pivot from dangerous derision to collegial support. Finally, down front, the lyrics were often lost in the wall of sound coming from the first-rate band under the stage.

Priscilla ends the first act with the anthem “I Will Survive.” If this production of Priscilla is any indicator, as Faulkner said, the LGBTQ community will not just survive, but prevail.

Priscilla, Queen of the Desert presented by Slow Burn Theatre Company through June 30 at the Amaturo Theater, Broward Center For he Performing Arts, 201 SW 5th Ave., Fort Lauderdale. Performances are Thursday through Saturday at 7:30 p.m., Sunday at 2 p.m. Tickets are $47-$60. Call (954) 462-0222 for tickets, at www.browardcenter.org or #Ticketmaster.com; in person at Ticketmaster outlets or the Broward Center’s Auto Nation Box Office. Info at www.slowburntheatre.org 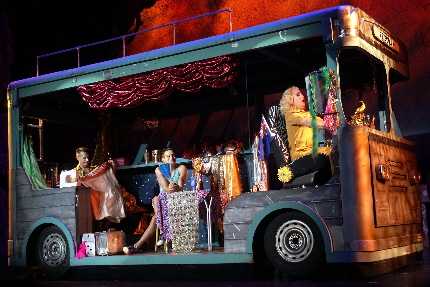