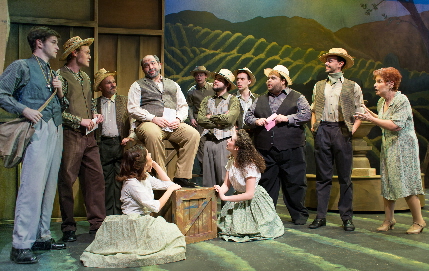 Some directors say if you cast a show well, you’re more than halfway home to a successful production. So while the acting is just barely adequate in Broward Stage Door’s The Most Happy Fella, have they ever casted the voices beautifully and that makes for some stirring satisfying moments well worth the ticket.

The dated 1956 script of this much-revived classic feels herky-jerky, even ham-handed in its construction, and it would take superbly skilled hands to make it credible even by musical comedy’s relaxed standards. But when the principal players open their mouths to sing, their sumptuous rich voices molded by a musical director make those scenes soar.

The Most Happy Fella is a masterwork by revered composer-lyricist Frank Loesser better known for much different styles in Guys & Dolls and How To Succeed In Business Without Really Trying. This was a passion project for Loesser who took a Pulitzer-winning Sidney Howard play They Knew What They Wanted from 1924 and tried to meld musical comedy tropes with a sophisticated near-operatic score.

The truth exposed by this production is that while the challenging score is breathtakingly lovely, especially in the performances of the Stage Door cast, the overall show is hampered by script penned by Loesser, who wisely left that chore to other people in his more successful works.

Hewing close to Howard’s original story, the simple-hearted Napa Valley grape grower Tony instantly falls in love with a down-on-her-luck waitress in a San Francisco eatery during a trip there. Instead of a tip, he leaves her a mash note along with an amethyst tie pin and the offer of marriage.

She doesn’t remember Tony, yet she engages in a correspondence with him for several weeks. But Tony is a balding stout Italian immigrant in very late middle age with a heavily-accented command of English. He reiterates his proposal by mail but encloses a picture of his hunky foreman Joe, a decent soul whose wanderlust constantly tempts him to leave.

The pragmatic waitress, whom Tony has nicknamed Rosabella, indeed, comes to the farm to accept the mail-order marriage offer. But Tony suffers a crippling accident en route to picking her up. She agrees to marry him that same night out of pity even though she is upset with the deception. Upset and confused, she and Joe hook up for a night of fleeting passion.

But any sharp edges of the triangle quickly soften as Joe is ever more drawn to the road and Tony’s saintly nature begins winning over the young woman. That is until…. well, no spoilers.

While this sounds like soap opera, Howard and Loesser created characters of depth and complexity who are driven by palpable loneliness to actions that would not normally endear them to audiences. Instead, when driven by solid performances, audiences feel sympathy for these flawed human beings,

Scattered throughout are upbeat production numbers by the community of neighbors who adore the expansive and affable Tony, as well as comedy duets by an impossibly upbeat ranch hand Herman and the heroine’s wisecracking friend Cleo. Some of those numbers became pop standards in the 1950s such as “Standing On The Corner” (watching all the girls go by) and “Big D” (little A-double L–A-S). But musical theater aficionados venerate the fervent passionate numbers like “How Beautiful The Days.”

The production is directed by Andy Rogow, the artistic director of Island City Stage in Wilton Manors, and he has done a respectable job with the actors and resources he has. On the other hand, musical director David Nagy has masterfully molding and melding the cast he has, including weaving tough harmony numbers such as the three bakers’ celebratory “Abbondanza.”

You may not buy Kyle Yampiro in his late 20s or early 20s as the aging Tony with silver substance sprayed in his hair, although the actor does make credible the hero’s adorable naiveté and bonhomie. But Yampiro’s gorgeous full baritone swells with power to embrace Tony’s passion for both Rosabella and life itself; his sound is one of unalloyed pleasures of the evening in such moving declarations as “My Heart Is Full Of You.”

Even with a disarming opening comedy number, you wonder if this show is going to land until Shay Weinberg as the life-battered waitress lets loose early on with as lovely an operatic soprano as you can hope for in regional theater. Given that she battled some vocal problems a few days earlier, her expressive voice effortlessly negotiates what would be considered arias if the composer was known as Verdi.

But perhaps the most heart-stopping moment in the show comes from Kyle David Pressley as the burly foreman. The broad-shouldered Presley rightly looks like a young linebacker for the Oklahoma Sooners, but he has a muscular smooth voice which caresses the poignant paean to the call of the open road, “Joey, Joey, Joey.”

Other principals include Kimberly Abrams as Cleo, Ellington Berg as Herman, Lisa Franklin as Tony’s possessive protective sister Marie, and Ardean Landhuis (who doubles as lighting designer) as the Doctor. Stage Door did not skimp on hiring: the stage is filled with 20 actors, most of whom join in the dance number staged by Andy Fiacco.

A damned-if-you-do damned-if-you-don’t decision is the music. Stage Door is regularly criticized for using digitized music when a score requires a lush, full sound. Here, they tried to answer that by using a two-piano arrangement written for a 1991 revival blessed by Loesser. That music is faultlessly executed live by Nagy and another fine musical director Michael Ursua. But the heft, breadth and depth of the sound that the score begs for to match the vocal sweep is glaringly absent, especially in the near-constant sometimes off-beat underscoring when performers aren’t singing. Indeed, the accompaniment, again no fault of the pianists, sometimes sounds like the honky tonk music heard at an early 20th century music hall or melodrama.

The real problem is that the script, which may have worked fine in 1956, is shot full of problems for a 21st Century audience. Start with the Herman-Cleo odd couple story. Back in the ‘40s and ‘50s, bookwriters felt their checklist of what was expected in a musical comedy required a second love story to fill out the evening, especially when the primary story was simple and straightforward (think Ado Annie and Will Parker in Oklahoma). It also was included as filler to be performed in front of a curtain while scenery could be changed. In this case, the love story is not just unnecessary, it clumsily injects delaying comic relief just when the story is reaching crucial dramatic moments. Surely Loesser’s estate would object, but this show could lose a bloated half-hour and be more dramatically effective cutting these entertaining but needless vaudevillian numbers. Those sections and some others are entertaining, but feel like Loesser didn’t trust the inherent drama in Howard’s original piece.

Loesser also leapfrogs in time, omitting crucial transitional moments, not the least of which is when the heroine is trying to run away on a bus. Tony goes to fetch her, but we never see him confront her and get her off the bus – what must be a key emotional moment. This happens often in opera where a good deal happens off-stage and is recapped in the lyrics, but not in musicals and certainly not in film.

What saves the work, along with the music, are the underlying themes of compassion, loneliness and especially forgiveness, which resonate are clearly as the voices of Weinberg, Yampiro and Pressley,