Harriet Oser Is the Reason To Travel GableStage’s 4000 Miles 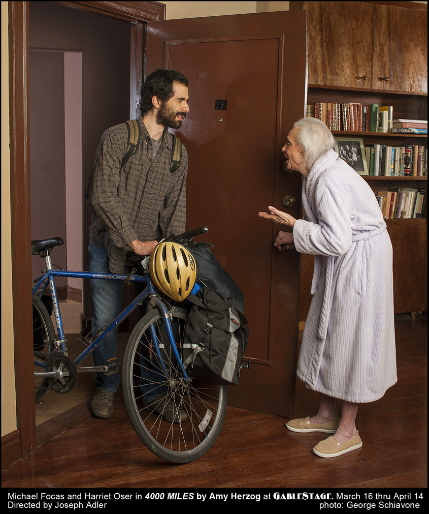 GableStage’s production of Amy Herzog’s play 4000 Miles is a puzzle. We can tell you the intriguing premise, we can sketch out the plot, we can describe the engaging characters, we can praise the strong performances and even identify the touching and funny moments.

This is baffling because Herzog’s play was widely acclaimed through two off-Broadway runs and winning two Obie awards, and is a popular title on regional theater schedules across the country. With her current Belleville playing in New York, she is the up-and-coming flavor of the month.

There’s a personal journey of sorts for the hero who seems to work his way out of an emotional depression while visiting his elderly grandmother in the wake of a horrific tragedy. But what occurs during this visit to spark that change is a mystery. Further, how the episodic scenes of the hero’s interaction with various people fit a particular arc eluded this observer.

It seems ungrateful to complain because any production that gives us an opportunity to watch actress Harriet Oser perform her magic on stage is cause for celebration. While her own age has relegated her in recent years to the roles of senior citizens in Driving Miss Daisy, The Interview, The Effect Of Gamma Rays On Man In The Moon Marigolds and in Herzog’s own After the Revolution, each characterization has been markedly different, other than sharing a skilled actress’ ability to disappear in a part.

Here, she is the proud grandmother Vera, living in a rent-controlled apartment in Greenwich Village with a portrait of Karl Marx on the wall and a rotary phone on the table. Her stiff upper lip is eroding as the debilitating effects of old age insidiously infect her routine.

The play opens at 3 a.m. as her scruffy grandson Leo appears in her doorway with his sturdy bicycle and dressed in clothes showing the grime of the titular 4,000 miles that he has biked cross-country from his home in Seattle.

Leo needs a place to crash for a day, maybe two. While the duo’s affection is obvious, Herzog’ script, Joseph Adler’s direction and actor Michael Focas’ somewhat shut down, tentative mien subtly indicate that all is not well with Leo. One of Herzog and Adler’s virtues is skillfully feathering in exposition so carefully that the tragedy behind Leo’s appearance presents itself like painfully assembled clues in a mystery. As his stay stretches into weeks, we realize that Leo is carrying far more baggage than the death of his best friend on their trek.

In fact, Leo has yet to symbolically finish his journey with the ritual of dipping the front wheel of his bike in the Atlantic, just as he began it by dipping the back wheel in the Pacific. Metaphorically, he also has yet to finish his emotional journey and perhaps his visit is meant to complete the grieving process that he has ducked to the point of not attending his friend’s funeral. He just disappeared back on the road after the accident.

But Leo and Vera’s relationship is not some idealized movie of the week paradigm. He usually calls her Vera (and dude) rather than grandma and he drops F-bombs with impunity. These intelligent and fiercely independent souls may depict a synergistic support system in one scene. Then, with no clear indication of how much time has passed, Vera accuses Leo of stealing her checkbook and he screams at her to leave him alone after his disaffected girlfriend breaks up with him in Vera’s living room. Advertising copy highlights Vera being an old-style Lefty and Leo being a new style Lefty, but their politics seems to have little to do with anything other than give them some color.

Yet Herzog, Adler and company have created two memorable scenes. Focas’ Leo finally relates the harrowing tale of his friend’s death in the most compelling part of the play. It ends with him collapsing into Vera’s lap as she gazes at him with ineffable sympathy – although Herzog tosses in a funny curve ball we won’t spoil. It’s a lovely moment of flawed but genuine human connection.

The other scene — both terribly droll and poignant — involves the two slouched on a living-room couch with moonlight streaming in, a stupid grin splitting both faces as they tell intimate boundary-crossing stories of their pasts. Sharp audience members will realize what has happened long before Leo picks up the pipe of hashish to offer Grandma another hit. Yet again, human connection.

Herzog has two other characters, the estranged girlfriend (Kate O’Phalen) and a one-night pickup (Wei-Yi Lin). The girlfriend probably exists so we have a way of discovering some of Leo’s backstory, although the scenes seem unfocused and their thematic intent unclear.

Perhaps the scene where Leo brings the pickup back to Vera’s apartment to have sex (again, would anyone do that?) probably makes some comment on Leo’s state of mind or evolution or something else thematic just out of reach. But its real accomplishment is to inject hilarity and vitality into the proceedings. Lin is hysterically funny as a drunken trend-obsessed rich girl allegedly studying at the Parsons School of Design, careening around the apartment.

The whole 90-minute story does seem to reach an end point with Leo taking a job in the wilds of Colorado, apparently leaving Vera in the lurch but willing to face a complicated situation with his family in St. Paul.  It’s the least clear part of the evening. Who has learned exactly what? Who has changed exactly how? And why? And how?

But this production has it shares of assets. Adler once again proves his skill at physical staging and pacing that is so dexterous that it’s invisible.

Any strong performance owes a good deal to Adler, but honor that Oser’s work here is so naturalistic that audiences may not realize how much craft she has brought to it. This is especially effective in her depiction of the slow deterioration of her mental acuity. It’s not just that Vera can’t find her checkbook or recall words to describe her thoughts aloud; it’s how Oser conveys Vera’s barely concealed anger at being reduced from a vital independent human being to someone too proud to ask for badly needed help.

Focas has only worked in the area a little bit according to his bio and this is his first Equity lead role. But he does a competent job keeping Leo real. He seems bemused rather than condescending at his grandmother being stuck in the 20th Century – she looks up a phone number in the Yellow Pages rather than use the Macbook her sons gave her.  He makes credible Leo’s alternative untethered lifestyle that eschews a cell phone as well as Leo’s evasion of the tragedy.

As always at GableStage, the technical end is flawless. Lyle Baskin designed an apartment with a history, but one kept as immaculately as senior citizens tend to do. Matt Corey’s sound design involves placing speakers where the door bell buzzes or laptop that Leo uses to hold a Skype conversation with his sister. Ellis Tillman’s costumes mirror the characters, from Vera’s threadbare bathrobe and button up sweaters to the pickup’s Project Runway outfit that includes stop sign red platform shoes, bright teal leggings and a purple-and-print halter dress.

GableStage’s frequent and brilliant lighting designer Jeff Quinn is absent this time, but his replacement Steve Welsh is every bit his equal in creating endlessly myriad patterns that seem perfectly natural but change the mood and indicate the passage of time. Like Quinn, Welsh is especially deft in illuminating those introspective moments where the light may come from another room or cold clear moonlight flooding in an otherwise dark room.

4000 Miles is not one of the stronger shows so far in GableStage’s 15th season, but it does have elements worth watching.