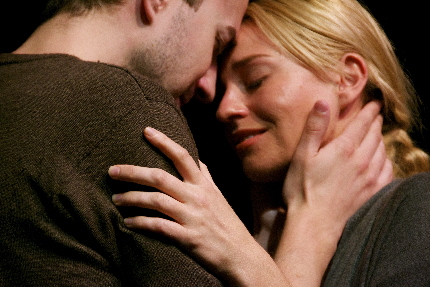 Initially, Lungs playing at Arts Garage seems to be about a young couple debating whether to bring a baby into this perilous, even doomed world.

But in the wake of plot twists, Duncan Macmillan’s breathtaking script comes clear as an examination of the fragility and tensile strength of relationships. It depicts the conundrum of deciding whether to deal with loved ones with your head or your heart. Some people here over-think their search for the right answers, some simply trust their emotions – with Macmillan seeing neither as a standalone solution.

Funny, moving, insightful and incisive, Lungs is a never-static kaleidoscope of ideas and emotions. Mounted on a naked stage without costumes or props, Lungs is an exhilarating feat of bare bones theatricality. It features Macmillan’s stunning command of syntax to highlight the paradox that clumsy, blunt words are the primary conduit for crucial communication and the building block of relationships.

It’s almost unfair to have waited even four paragraphs to begin unleashing thoroughly-deserved praise on director Louis Tyrrell and actors Betsy Graver and Cliff Burgess who have astonishingly found Macmillan’s quirky emotional groove, deciphered the sadistically difficult to comprehend script and mastered the broken field running rhythms in his dialogue.

About my only quibble is that I truly have not a clue what the title means. It doesn’t matter.

Over 90 minutes or so, we watch the evolution of a romantic relationship between two attractive and adorable young people: a quirky voluble woman working on her Ph.D. who is sincerely concerned about the social and ecological ills afflicting this decade, and her live-in lover, a warm-hearted musician who is as crazy about her and she is about him. They are nameless in the script, Everypeople who might as well be called Adam and Eve – which we will here for clarity’s sake.

When the stage lights snap on, Adam has just flummoxed Eve with the proposition that they have a baby. We don’t find out until later that they aren’t married, but this initially doesn’t seem important to them, either.

We listen in as they work through this decision-making process. She is far more garrulous because she thinks out loud. She launches into a hysterically funny stream-of-consciousness monologue that includes an obsessive imagining of the child’s birth and maturation. Later, she will accuse Adam of over-thinking, but clearly she is as guilty of it as well. But Macmillan makes a strong case for such caution as he has Eve frequently reference the horrors in the today’s world and those even worse just out of sight in the near future.

But this is just the jumping off point for a plot arc that lobs twists like emotional grenades. Each one exacerbates the unspoken fissure between the two lovers: They really have different temperaments and that makes crucial connections difficult in the times of crisis that Macmillan throws at them.

During such moments, Adams asks an emotionally devastated Eve, “What do want me to say? What do want me to do? I need to think.” His need to think of what the right answer might be to her pain — instead of simply knowing instinctively what to do — makes her feel that she does not really know him, that he does not know her despite what they thought was a perfect bond. And that’s where the crack in the relationship lies.

Over and over, the characters say they are just holding “a conversation” as if that word means communication. It doesn’t necessarily, despite the flash flood of nouns and verbs. That dialogue, those conversations during which the couple has epiphanies and makes decisions, is brilliant. As a playwright, Macmillan’s not trying to reproduce how people really talk, but his heightened use of language gives that illusion: elliptical paths of reasoning, incomplete sentences, two people weaving their comments in and around each other like swirling dancers. Especially, there’s his technique of a character revising what they are saying, fine-tuning the verbiage as they think aloud.

For instance, Eve says early on (adding some punctuation), “I’m completely freaked out, yes, because why don’t you ever, how can you, why didn’t you, why would you not talk to me about this. I wish you’d let me in, I wish you’d let me in to your head, into your fucking impenetrable fucking….” And Adam cuts her off with his own thought.

Eve is not a ditz, but someone thrashing about trying to articulate precisely what she is thinking and feeling in the same millisecond as the thought is coalescing.

The ability of Burgess, Graver and Tyrell to make such convoluted verbosity on the page sound on stage as effortless and smooth as a flowing fire hydrant is nothing short of miraculous.

Occasionally, these incessant verbal pirouettes get a bit wearing and you wish someone would just say what they mean in a simple declarative sentence.

And yet you have to forgive a playwright who can pen Adam’s own dark night of the soul aria when he recognizes those differences that couples rarely articulate for fear that saying them aloud will make them fatal.

Unable to sleep himself, he speaks to Eve who is assumes is likely out cold (this time without punctuation): “When we’re talking I can’t take my eyes off you. You’re so honest with me and it hurts sometimes but I remind myself you only say these things because you trust me. That I’m an anchor or something, I’m a nucleus to your proton, is that right? I think sometimes you think we’re having a conversation and that I’m listening and responding but really I’m only silent because I have no idea what to say. You’re like an animal, a hungry, wild animal and you’re circling me and snarling and you’re beautiful and exciting and you’re trusting me because I’m standing still but really I’m just frozen to the spot, really I just don’t know what else to do and I worry that sometimes you think that that’s strength and it’s not, it’s not, it’s just….”

Macmillan’s script is 99.9 percent dialogue with no stage directions, no movement, not even an indication when time and place change, which they do a score of times instantly. In performance, this happens literally with an actor turning on their heel or walking upstage. In fact, Macmillan, in an incredible show of artistic arrogance or laziness, does not indicate these switches in the script, making it cruelly difficult for the actors and directors who must devote a wastefully inordinate amount of limited rehearsal time just trying to figure out what is going on.  The linchpin reversal in the plot is not apparent in reading the script for several lines, forcing an actor and director to go “what the hell?” and go back and study it until they suss it out. With no other help in the script, Tyrrell and his cast are walking a tightrope in total darkness, forced to create their own light.

One of the joys is watching Tyrrell’s staging. With only the subtlest of lighting changes (which Macmillan discouraged) Tyrrell has his actors convey the passage of time — minutes, months, even decades — simply by slight inflections in speech or changing body language. In one coup de theatre, he has Adam chart several days simply by walking across the back of the stage, stopping and uttering a single sentence fragment and then moving to a different station of the Cross like a film montage.

The actors have the necessary chemistry for two characters so genuinely in love, although it’s not quite a perfect fit, which is exactly the right feeling you should have for these two. Burgess deftly creates a deeply anxious man trying hard to be supportive of this wonderful creature, but who in fact does not quite know how and knows he doesn’t. Graver makes credible rather than laughable Eve’s concern for the world situation. She creates a woman who is a tiny bit goofy, but who is also unassailably genuine in her emotions. You can almost see feelings play on the outside of her skin like electrical arcs. Anyone who knows how theater is made will know that Tyrrell deserves significant  credit for their performances, the pacing and the plumbing of the script for meaning.

The London-based Macmillan is not a well-known name to mainstream American audiences, but he will be. Lungs is getting several productions in this country.

This last entry in Arts Garage’s first full season has staked out the theater’s territory: 21st Century works that most Florida audiences have never heard of, simultaneously comic, touching and thought-provoking. At the risk of opening an old wound, it is exactly the kind of adventurous work Tyrrell did at FloridaStage but with a tenth of the budget.