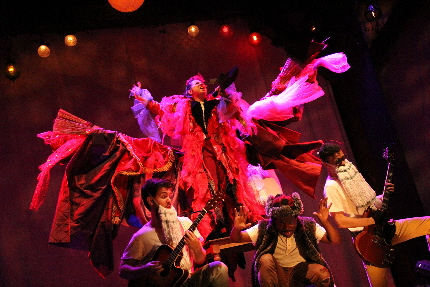 Jeana Montgomery as the Dragon in Area Stage Company’s Shrek

Whether or not it was a good idea in the first place to make a Broadway musical from the hugely popular animated Shrek can be argued. But the creators wisely retained the film’s wealth of irreverent satirical humor and then unwisely drowned it in a stage spectacle: 47 characters, about 22 musicians, plus budget busting costumes, sets, special effects and as realistic makeup as could be achieved.

So young director Giancarlo Rodaz, son of the venerable venue’s founders, made a virtue out of a constraint. Substituting imagination for cash plus a joyful embrace of theatrical artifice, he has staged Shrek the Musical with seven actors — two of whom double with the band; proudly relying on homemade costumes and props, simple set pieces, and staging some scenes with silhouetted actors behind a backlight screen – human shadow puppets (with some real shadow puppets as well). Far from trying to ignore the accommodations, the tongue-in-cheek tone of the original film is taken a level further with this production’s eye-winking acknowledgment of its modest tricks.

Some of the gimcrackery gets a bit strained and sloppy at times, but the energy, enthusiasm, imagination and sheer talent of everyone involved quickly guarantees the willing buy-in of the audience.

The result is a production often more delightful, charming and occasionally even more touching than the $24 million behemoth. The fact that we can see real people under the theatrical approach makes the themes feel even more relevantly universal.

Rather than a heavily masked Shrek in a fat suit, Ryan Bauta is an attractive balladeer with a guitar who wears a biker’s leather bomber jacket and a green head scarf, and most importantly, a bright green clown nose when he is playing the hero. He doffs those whenever he, like everyone else in the cast, slips into secondary or ensemble roles.

That means that everyone in the cast, even musical director/pianist Katie Duerr, gets solos in the spotlight that show off solid voices of performers whose ages range from just out of college to high school. Although the show might miss the heft of two dozen actors singing and dancing in the production numbers, these voices are beautifully delivered in carefully blended arrangements.

Hopefully, at this point, no one not lost the past decade in Lower Mongolia needs much of a recap of the 2008 show based on the 2001 film and 1990 book about a misanthropic ogre who rescues a beautiful princess for a nasty prince, but falls in love and finds that a person’s physical exterior matters less than their interior beauty. Like the film and book, the show aims to delight children, but its wicked intelligent wit and genuine sentiment are meant to thoroughly entertain adults minus any junior escorts.

All the iconic moments are present including the fart and belching contest, but Rodaz and company find solutions to more expensive challenges. For instance, on Broadway, Pinnochio’s nose actually grew. Here, the actor puts a slide whistle up to his nose and extends it. The wit in the script remains such as Donkey bragging, “I am a GPS with fur.”

It may not be fair to single out anyone in the ensemble cast, but obviously Bauta is delivers Shrek’s crusty bruised exterior that barely hides his loneliness. Also credit 17-year-old Michelle Gordon for her alternately dreamy and feisty Princess Fiona yearning for a fairy tale future, and the inexhaustible Corey Vega for an array of creatures from the scenery-chewing Lord Farquaad to a cigarette-smoking Wolf wearing Red Riding Hood’s grandma’s nightgown.

Nathalie Moreno’s costumes on a dime store budget are both funny and evocative, Orlando Hall’s sound is surprisingly balanced and Rodaz did the imaginative set and lighting designs.

It all proves that imaginatively-mounted theater can be the equal of any other entertainment genre.