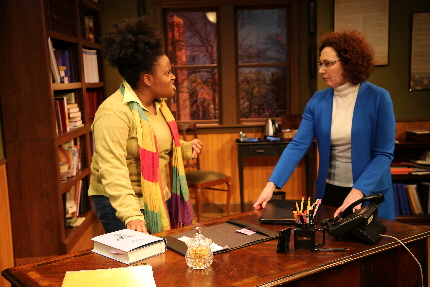 “What are you doing to promote equality?” a black college student demands of her white professor in Eleanor Burgess’s taut, intense, timely drama The Niceties. The professional, non-profit Island City Stage (ICS) is giving the piece a mostly commendable production through April 25. Those who wish to see the play live, in-person, can do so. And those who are not comfortable with returning to the theater are able to watch the production virtually.

However one chooses to view the show, after hearing the aforementioned question, you might wonder what you have done to promote equality between the races. And while you are at it, you might ask whether your actions, or inactions, intentionally or not, have allowed systemic racism to thrive.

Surely, anyone can harbor racist thoughts, the playwright seems to be telling us. That includes Janine Bosco, although she hardly fits the image people might have of a racist. Indeed, Janine is a lesbian and a liberal professor at an esteemed university in the Northeast. Meanwhile, Zoe Reed is a black, intelligent student. In addition, she is a staunch activist and for equality.

If you put this pair in a room, surely they would have enough in common to get along. But when it comes to a combustible combination such as race, power, and history, it seems it’s only a matter of time before a fierce collision causes an explosion.

The Niceties begins innocuously enough. Zoe and Janine are in the professor’s office going over a research paper. The two are charming, laid back, and smiling warmly at each other. Also, they are sitting next to each other; they seem like good friends. But as Janine questions Zoe’s thesis statement, and criticizes the younger woman’s writing, Burgess slowly but surely peels away the pair’s niceties. The more that the two argue and accusations fly, professor and student move farther away from each other, until they’re on opposite sides of Janine’s office. They are fiercely in battle, each in their own corner.

Through Burgess’s sharp, pithy dialogue, comprised of words that insult, inflame, irritate, and instigate, the professor and her student hotly debate. For instance, was George Washington a great military general and statesman? Or, was he a bad person because he owned slaves? Should an American history professor teach students not only about figures such as Washington and Jefferson, but about the lives of their slaves? For that matter, is a professor of color better equipped than a white professor to offer students a more balanced, well-rounded, and fair course on American history?

Zoe ultimately suggests that Janine is little more than a racist, privileged, powerful, and arrogant professor who cannot begin to understand African Americans’ suffering throughout history. But Burgess does not portrays Zoe as solely an innocent victim. Rather, Zoe says some hurtful things.

“I want you to feel awful, because that is what’s fair,” Zoe tells Janine. “You know, I am actually enjoying the opiate crisis. I like it that white people are having trouble with drug addiction. I want them to know how it feels. I want a white student to walk into this college and have only black professors. I want an all-black Supreme Court. And all-black juries. I want you to sit in front of an all-black tenure committee. I want you all to work for four hundred years and not be paid a dime.”

Throughout the play, it is hard to take sides. Both characters can sound like arrogant, insensitive individuals. On the other hand, both say things that might lead us to understand, if not completely empathize with them. Both characters are likable and charming early on. Certainly, Burgess does not take sides; she neither condemns nor glorifies the women. What the playwright offers is an urgent piece that is in perfect sync with the zeitgeist of today’s sharply-divided, often-hostile world.

The Niceties takes place during a divisive time, for sure. But the economic and political climate and overall spirit of the nation and world were different than today. Burgess has set her piece in early 2016, when Barack Obama was still president and many believed that Hillary Clinton would cruise to victory over Donald Trump. In ICS’ production, Janine drinks tea from a cup with “Hillary 2016” emblazoned on it.

“We’re about to have our first female president!” Janine exclaims, something that may be hard to hear in hindsight. Then again, Zoe’s response may be painful to hear as well, however true it may be: “We have our first Black president and we’re still getting lynched,” she says.

Such dialogue is sure to keep our eyes and ears riveted to the stage. And Burgess has included a shocking development that will surely drop jaws. The playwright has perfectly placed the surprise right before intermission. As a result, we itch to return to the action to see what happens next.

As for the ending, it is hardly neat and satisfying. Rather, it suggests that as a nation, we’re nowhere near the end of our work in ending systemic racism. In fact, knowing how the 2016 presidential election turned out, it’s hard not to imagine with pity how Zoe might fare in the years following the 2016 election.

The actors disappear into their characters in performances that are commendably natural. In the beginning, a bright-smiling Rachel Michelle Bryant, as Zoe, radiates charm during the calm before the storm. But as the action progresses, her voice becomes increasingly filled with contempt and Bryant scrunches her face into an expression of contempt mixed with bitterness. And Bryant’s wide, icy, accusing eyes stare straight at the professor.

Lisa Kay King imbues the academic with an air of assured authority. Looking at her, you realize she firmly believes that a professor is something she was born to become. Just as Bryant does with Zoe, King’s professor convincingly conveys affability and charm in the play’s beginning. And King’s performance is just as credible when her character turns defensive, loud, and even vulgar. One could say that it’s a stretch to believe that a learned person in Janine’s position would use foul language. Then again, she is human, and King imbues her with humanity.

One problem with the performances is that at times, the actors lower their voices to the point that it’s hard to hear them – even within the intimate confines of ICS’ performing space. Both actors wear microphones, which didn’t appear to be working during the reviewed performance. But are microphones really needed in ICS’ intimate space?

Scenic designer Ardean Landhuis has created a spacious and detailed university office, the play’s sole setting. Through a window, we see what looks like two or three buildings on campus. Landhuis also designed the lighting, which, like the play, is realistic. To Landhuis’ credit, the lighting doesn’t call attention to itself. Neither does W. Emil White’s character-appropriate costumes.

Ultimately, The Niceties is about the need for people to identify ways in which they might be allowing systemic racism to thrive, and work to bring about change in themselves and society. Quality theater forces us to perform such a self-examination and work to bring about change. No doubt, this production offers audiences thought-provoking theater that is also entertaining.

The Niceties continues its live, in-person run through April 18. Performances are at 8 p.m. Fridays and Saturdays, as well as at 5 p.m. Sundays. All live, in-person performances take place at Island City Stage, 2304 N. Dixie Hwy in Wilton Manors. Streaming will be available from April 16-25.  For patron safety, Island City Stage is operating at 50 percent capacity. Patrons must undergo temperature checks before entering the theater. And audience members as well as staff must wear masks throughout the performance. For tickets for either live or video performances, go to islandcitystage.org.