Joy In The ‘Hood; Dreaming In The Heights 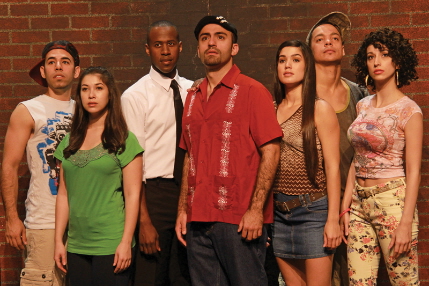 It’s been a long, long time since a locally-produced musical has thrust inside an audience’s collective chest to touch its heart like Actors’ Playhouse’s triumphant production of In The Heights. Several shows this season have produced near raves among critics and audiences, but this production is cause once again for recalibrating your standards.

Joy pours off the stage with such exuberance that it’s enough to make a crisping-out theatergoer tear up with gratitude. Every last person in the cast and creative team led by director David Arisco and choreographer/musical stager Stephanie Klemons combine power, passion and skill to produce an affecting story of dreamers, community and a search for home.

Heights is a contemporary tale deeply rooted in Hispanic culture and told in part through salsa and hip hop, in part through Broadway ballads and production numbers. If this doesn’t bring in a diverse and younger audience, Miami doesn’t deserve good theater. Yet, the universality of its themes transcends ethnicity, age and geography much as Fiddler On The Roof has for nearly 50 years.

There were a few ragged edges opening night. Alexander Herrin’s sound quality was as good as Actors gets and the performers’ enunciation was all you could hope for, but the tsunami of lyrics words flowing pell-mell were sometimes hard to understand. Since a lot of exposition and relationships are set up in the opening production number, it might help to read a plot synopsis on Wikipedia before you go. But don’t worry if some of the words fly past too fast or get lost in the wall of sound coming from the orchestra pit. The acting, dancing, singing and direction communicate well enough that you’ll pick up everything as time goes on.

Heights was the Cinderella story at the 2008 Tony Awards where it swept best musical, score, choreography and orchestrations. It was grown slowly by its charismatic composer/lyricist/star Lin-Manuel Miranda and book writer Quiara Alegría Hudes in informal readings and workshops with friends that included Miamians Henry Gainza and Janet Dacal as well as Klemons.

The story is set over three days on a sweltering July 4th weekend in the Washington Heights’ barrio, not quite a melting pot of first- and second-generation Americans with roots in Puerto Rico, the Dominican Republic and Cuba. Our hero/narrator is Usnavi (a truly wonderful Nick Duckart), the young owner of a bodega that serves as the center of a proud tight-knit community. He introduces us to a tapestry of three generations of clearly-drawn neighbors with their own inter-related stories.

Sitting on a stoop is the nurturing Abuela Claudia who serves as the community’s surrogate mother, especially to the orphaned Usnavi and his irreverent brother Sonny. Next door to the bodega is a beauty salon run by the sassy Daniela, alongside employees Carla and the lovely Vanessa who Usnavi secretly pines for, but who is trapped by an alcoholic mother. Down the way is the limousine/car service owned by first-generation immigrants Kevin and Camilla Rosario with the help of the handsome African-American Benny. He’s in love with their daughter Nina, a gifted young woman who “escaped” to attend Stanford University and has just returned home from college with a crushing secret – she worked so hard to pay for classes that her grades cratered and she dropped out months ago.

Adding to the texture are fully-realized denizens such as the Piragua Guy who sells flavored ice cones out of a pushcart in competition with a chain and Grafitti Pete, a street hustler with incredible dance moves and a hidden artistic talent.

But this seemingly solid community is on the verge of changing because of economic pressures: the salon is moving to an outer borough because of rising rents, the car service is besieged by lowball buyout offers, even Usnavi’s bodega is struggling to get by. The lack of financial security exacerbates each character’s determination to pursue wealth, fame, love and above all, a validating self-fulfillment.

The homeostasis is suddenly upended when Usnavi discovers that he has sold a winning lottery ticket to someone in the neighborhood.  The genius of Miranda and Hudes is that the jackpot isn’t millions of dollars but $96,000 – just enough money to enable someone’s dreams of rebooting their lives.

The overarching theme is seen in the residents’ need to dream of a better life and how it relates to the concept of home. Many of them define success as leaving the neighborhood and failure as returning to it or being stuck there. Among their lessons is finding within themselves the courage to continue pursuing those dreams regardless of where that occurs.

Arisco’s well-honed skill at musical staging is matched by the outstanding work of Klemons who built her choreography on Tony-winning work by Andy Blankenbuehler. She and Gainza, who plays the Piragua man and is assistant director to Arisco, helped bring the well-tested lessons of the original production to this effort. Especially notable is how life in the community is always churning in the background. Patrick Tennent’s lighting picks out the characters at the center of the story at any one time, even while Arisco and Klemons have other characters simultaneously interacting in the shadows.

Credit Arisco and Executive Producing Director Barbara Stein with doubling down their bet: a cast of 20 mostly Equity performers with remarkably strong, clear voices; eight musicians crammed in the pit under the masterful baton of musical director Manny Schvartzman; a three-story recreation of storefronts and fire escapes by designer Sean McClelland, and aggressive outreach to young theatergoers including using a Knight Foundation grant to bring in 3,000 students.

McClelland’s fine set design and Ellis Tillman’s costumes, along with Klemons’ choreography and staging, are as close to reproductions of the Broadway version as possible.  No one is trying to reinvent the wheel.

Miranda’s music is infectious and moving, but his lyrics are dazzling in their agility and inventiveness, suffused with a musical poetry of their own. Hudes’ book is insightful and sophisticated in its observations of a community that seems idyllic but in fact hides its own class and racial prejudice. The dialogue is sprinkled with Spanish exclamations and asides, although most of it is comprehensible even to Anglos like me. What’s fascinating is that the simple injection of a “perdóneme, Jesu” gets the same kind of laugh of recognition that Jewish audiences deliver anytime they hear an “Oy” or a snatch of Yiddish in a comedy.

Last but not least is this cast. Start with home-grown Duckart who has been shuttling between New York and Miami for several years now. The actor and his character’s open -hearted persona is the glue that holds this ensemble show together. We’ve known he was a terrific singer since Doctor Radio at FloridaStage and a fine musical actor in many Actors’ Playhouse productions, but here he has found the defining role of his career to date. His eyes pour out that joy, that pride, that compassion for his neighbors, the pain at losses and above all, a yearning for something just out of reach. Since Usnavi is not a good dancer, you have to love the slight goofiness that Duckart injects in Usnavi’s dance steps.

The entire supporting cast could not be bettered. Sarah Amengual brings a gloriously clear, strong voice and sensitive acting chops to Nina, especially in her plaintive solos “Everything I Know” and “Breathe.” Shortly after graduating from New World School of the Arts, she played Maria in the Broadway revival of West Side Story and has won a Carbonell nomination as the daughter in Actors Playhouse’s Next To Normal last season.

She is matched step by step and note for note by Christie Prades who makes Vanessa an affecting meld of the self-confidence you need to survive on the street and the vulnerability of someone struggling with financial survival.

Oscar Cheda, who won a Carbonell for The Adding Machine, delivers what may be his finest performance as Nina’s father, the son of Cuban farmers who is willing to sacrifice everything he has achieved for his daughter’s future. When Nina rejects his offer to sell his hard-won business for her tuition, Cheda sings “Inútil (Useless)” about his perceived failure, bringing a depth of passion that will rip apart anyone who has been a parent or just someone’s child. 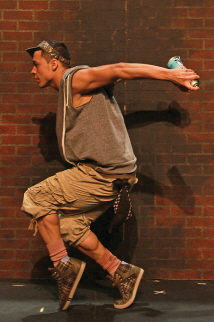 Special note must be reserved for three people. Gainza takes the role of the street vendor, which seemed like just a background character in the national tour, and makes him a gloriously three-dimensional character blessed with a lovely singing voice. Doreen Mantalvo makes the abuela the fulcrum of the community without pulling focus from anyone, but her clarion voice stops the show when she recalls her childhood in the Cuba of the 1940s in the powerful “Paciencia y Fé (Patience and Faith).” Finally, in a cast of solid dancers, Jose-Luis Lopez as Grafitti Pete stands out for earnestness, precision and crispness.

In addition to Klemons and Gainza’s past with the piece, this production obviously benefits from the fact that several other people have worked either in the original cast, replaced members on Broadway or been on the national tours including Cheda, James, Lopez, Montalvo, Tomasko, Fiedelman, Kritzer and Muñoz.  But you can also feel that entire cast – whose ethnic origins reflect an United Nations of Hispanic countries – is energized simply by doing a play that puts their culture on a mainstream stage for their families and friends to see.

Along with Other Desert Cities, this edition of In The Heights makes Actors’ Playhouse’s 25th anniversary season a benchmark year for quality as well as longevity. Not since the same theater’s legendary Floyd Collins in 2003 have I wanted to turn around and go right back the next night.