Posted on November 8, 2015 by Bill Hirschman 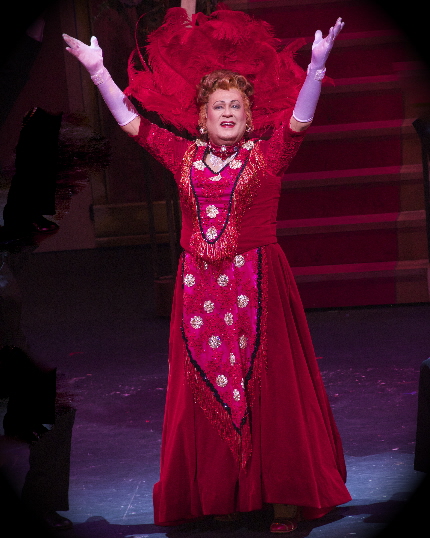 The first question that everyone wants answered is: Is it possible to buy Lee Roy Reams as Dolly Levi in The Wick Theatre’s Hello, Dolly!

The answer is “sometimes.” The answer also depends on how willing you are to accept the theatrical conceit of Reams being the second man ever to play the part, even with composer Jerry Herman’s blessing.

Some people will be unable to let their imagination meet the production halfway even though they’re willing to ignore the cables that make Peter Pan fly. Some will come in with a chip on their shoulder about the entire premise. Others will revel in the gay-friendly idea of a man in drag, à la Charles Busch, which is very much not what Reams has in mind.

Reams is, in fact, playing Dolly absolutely straight as an acting challenge with as much integrity as Brian Bedford playing Lady Bracknell. He rarely winks at the audience to acknowledge the obvious subterfuge.

So it’s not so much ironic as apt that the veteran song and dance man is most believable and most effective in the book scenes when the yearning widow is asking her dead husband’s permission to jump start her life. Reams’ ability to inhabit those profound emotions is deeply touching and perhaps superior to most performances you’ve seen of the role in that respect. Really.

And Reams’ decades of experience, including acting in and directing the show several times, means he expertly excavates every comic nook and cranny in the piece, although his feminine mystique evaporates when his voice drops into a masculine register to zip off a sardonic punch line.

Where the illusion vanishes, oh so sadly, are the big production numbers. For instance, on opening night, the vision descending the staircase and sashaying around the Harmonia Gardens with adoring waiters was clearly a 73-year-old man of limited mobility, a bit broad of beam, with wan makeup and a strawberry wig, who had fallen the night before and who was having a terrible time in heels battling the treacherous folds of a floor-length gown determined to topple him. It really hurt to see Reams, one of the finest dancers on Broadway in Applause and 42nd Street, clumsily parading up and down the stage and taking a break to catch his wind. What saves such numbers is Reams seems to be having the time of his life performing a show he clearly loves and the audience members who want to go along for the ride are enchanted; the crowd went appropriately wild during the “Hello, Dolly” cakewalk.

Past the Reams-as-Dolly issue, the Wick production is surprisingly solid and entertaining, especially given it survived more than its share of backstage troubles and logistical challenges.

If the show rarely soars into magical territory, Reams the director can be proud of molding a truly talented crew of performers in an energetic and appealing edition that does full justice to Jerry Herman’s still thrilling score and Michael Stewart’s deftly constructed script.

Reams, who worked with Dolly’s original director-choreographer Gower Champion later on 42nd Street, successfully walks a very fine line in echoing Champion’s work, which Reams says cannot be bettered, but studiously working not to reproduce a carbon copy for those with treasured memories. “Rediscover not reinvent,” he has said. (Marcia Milgrom Dodge did direct a successful reinvention for the Maltz Jupiter Theatre in 2012.) But yes, there is the red dress, the strutting dance steps in “Elegance” and several other iconic visuals. 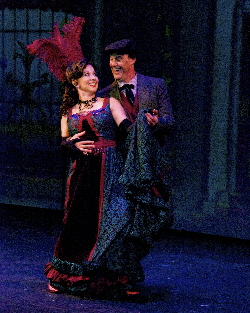 It also helps that key cast mates have done the show before with Reams, including tall handsome James Clow whose glorious baritone as Cornelius Hackl is a vocal highlight of the show in “Put On Your Sunday Clothes” and “It Only Takes A Moment;” and Susan Powell, from the Wick’s George M this summer, who trills Irene Molloy’s lovely “Ribbons Down My Back.” They are completely in sync with Reams’ vision that Dolly is all about tossing off the shackles of calcified convention and embracing the adventure that life can be in a phoenix-like resurrection.

But the finest performance comes from veteran Broadway actor Lewis J. Stadlen, who is arguably the funniest Horace Vandergelder we’ve seen. You may not recognize his name, but you’ve seen him on stage, film and television for decades; if you saw The Producers on the road, the odds are good he was playing Max Bialystock. Stadlen does not imitate so much as synthesize the tropes of great comic actors of the past such as George Burns, Zero Mostel, Groucho Marx and the part’s originator David Burns. His creation of the curmudgeonly small-town merchant prince is clearly in a class by itself in this production with every furrowed brow, every ten-penny nail-chewing utterance and the drily delivered precision punchlines of a vaudevillian of yore. The sole shortcoming is his transformation in the final scene is far too abrupt and even improbable.

Speaking of imitations, Reams goes out of his way to make the part his own. He channels no one else, least of all his friend Carol Channing, who he directed in the last Broadway revival in 1995. The only shred of Channing, and it may be unconscious, is in the opening number when he sings certain protracted words like “lives” with that unique Channing bray. Otherwise, this is Reams’ take on the part, once again, powered by his belief in the emotional underpinnings of Stewart’s book.

Without harping on it, he is noticeably a shade too old for the part — as are several cast members who have at least a decade on the way the parts are written. If his voice is not as uniformly strong as it once was, he can still triumphantly belt out climatic notes with an emotional power that punches deep into the audience such as the home run delivery of the word “parade” in “Before The Parade Passes By.”

The choreography is by another Reams colleague, Randy Slovacek, who certainly echoes Champion’s work if not completely copies it. Oddly, the fabled “Waiter’s Gallop” is appropriately frenetic but seems lackluster. Among the aforementioned problems, much of the dancing corps were working in other shows during the Wick’s short rehearsal period. In fact, reportedly, the cast never got to run the show top to bottom until the first preview Thursday. Still, there’s a surprising amount of polish other than some dropped lines.

A live band was replaced with lush recorded tracks shortly before rehearsals started, but musical director Michael Ursua is present at performances conducting the singers and playing a live piano at times. The singers under his leadership cannot be faulted.

No surprise: The peacock-proud costumes, drawn heavily from the 1995 Broadway revival, are breathtaking for their variety, color and attention to detail, particularly in the rousing “Put On Your Sunday Clothes” parade. But Reams’ outfits were made for him, including the iconic velvety dress with a spangled breast and ruby red plumage adorning a headdress.

The set was rented from Music Theater Wichita and augmented with Josieu Jean’s projections, but it only was installed Monday, followed by the work of the lighting designer David Castaneda, then technical rehearsals and a first preview on Thursday. Slovacek and frequent Wick director Norb Joerder served uncredited as Reams’ directorial eyes and ears when he was on stage.

With a 22-member cast, including five Equity contracts, the effort is a huge financial gamble for the Wick as it enters its third season. But if you can accept Reams’ personal and artistic gamble, it’s a fine rendition worth seeing.

To read an interview with Reams about the project, click here.