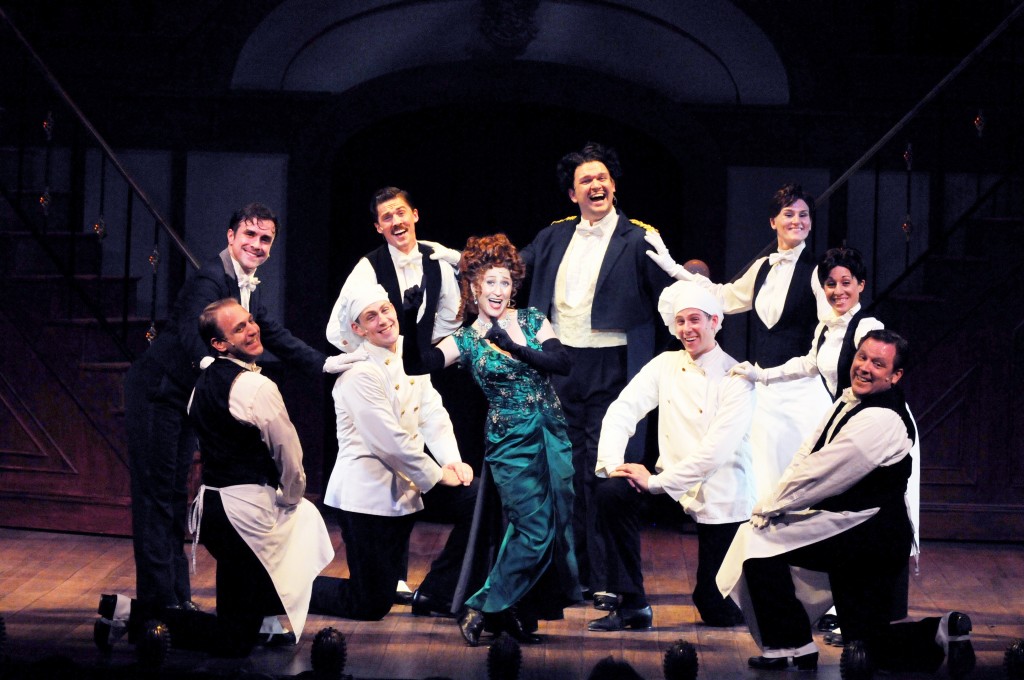 It’s something called Hello, Dolly! and if you think you’ve seen it before (and before and before), we’ll argue with you. Because director/choreographer Marcia Milgrom Dodge and leading lady Vicki Lewis invest the Jerry Herman-Michael Stewart warhorse with a freshness that nearly obliterates the iconic images created by Gower Champion and Carol Channing.

They don’t reinvent or reinterpret it so much as sidestep a great deal of what’s been done before by treating the work as if someone just dropped an untitled manuscript off on the theater doorstep.

One example may seem minor, but it’s emblematic: When Dolly makes her big entrance at the Harmonia Gardens, it’s not in the blazing red ankle-length gown that has become indelibly linked to the show in the public consciousness since 1964. Lewis struts down the stairs in a sexy emerald green dinner dress cut up to the thigh.
Polished like a spittoon in a tony gentleman’s club, Dodge’s Dolly focuses less on Champion’s circus spectacle and more on the heroine’s joyous return to life after an enforced hiatus, something we can all relate to after the last few years.

Everyone has seen Champion’s brilliant choreography so often because most productions just try to copy of it what they can, especially the title number. But Dodge and her assistant Josh Walden started with a blank sheet of paper and created steps and patterns totally their own. Notably, the Waiter’s Gallop, more tap dancing here than the traditional high stepping, justifiably earned the most sustained applause of the night for the first-rate dance ensemble. Where Champion staged the finale of “Put on Your Sunday Clothes” with the cast spread across the stage horizontally on cut-out railroad cars, Dodge arranges the cast in three lines up a staircase in the center of the set as if the train is chugging down the tracks right at you.

If this show resembles a freight train much of the time (when it’s not a luxuriating waltz), the engineer is Dodge,  but it’s Lewis standing on the cowcatcher pointing the way.

Lewis may be best known for her supporting turn on the TV series NewsRadio, but half a lifetime of leading lady roles in musical revivals has armed her with a star wattage and skilled musical theater chops to command the stage. Her Dolly Gallagher Levi melds the fast-talking spiel of Harold Hill with the celebratory sexuality of Mae West.

No one would accuse Channing of vesting Dolly with a mellifluous voice, and Barbra Streisand in the movie twisted Herman’s score to her style rather than try to fit hers to it. But Lewis – who occasionally sounds like Streisand – faithfully embraces and caresses Herman’s music as it was meant, with an instrument that is sometime a clarion trumpet, sometimes a mellow viola.

Even better, Lewis (and the entire cast) are actors who sing. At the finale of the stirring “Before the Parade Passes By,”  the stage is filled with prancing marchers. But Lewis’ face is transfixed with the quiet joy and anticipation of a future she can see over the horizon.

She has a strong foil in Gary Beach (memorable on Broadway as Roger Debris in The Producers and Lumiere in Beauty and the Beast) delivering a blustery sputtering curmudgeon in Horace Vandergelder. He had a little trouble with his lines and opening number, “It Takes a Woman” in the first couple of scenes. But Beach warmed up and he displayed first-rate comic chops that made the most of eyes that squint and roll at the folly of his fellow human beings. Unlike 90 percent of his predecessors in the part such as Walter Matthau, Beach made Vandergelder’s willing capitulation to Dolly in the finale completely believable.

Maybe even better is the rubber-faced Matt Loehr as the lovesick clerk Cornelius Hackl.  Loehr, who looks a little like a very young Paul Lynde before he discovered sarcasm, exudes that innate exuberance of the contentedly daffy. Those who saw Loehr as the lead in the Maltz’s Crazy For You last season know he is a superb dancer. But to watch him galumph like a wounded crane as he learns to glide in the ecstatic waltz “Dancing” is a solid hoot.

The rest of the cast, all looking for their share of adventure, is fine: Daniella Dalli is a handsome Irene Molloy with a mischievous glint in her eye who brings a wistful quality to her songs, Katie Emerson is adorable as her assistant Minnie Fay, Chris Brick is the woebegone Barnaby Tucker, and the rest of the ensemble hasn’t a weak link in sight.

They have been expertly led by musical director Helen Gregory, conductor of an eight-member pit band that miraculously sounds like far more – crucial when the original cast album everyone is familiar with had three times that number.

Paul Tate Depoo III took a sketch of the Hearst Castle and merged it with the mahogany and brass accents of a luxury railroad car of the 1890s to create the original unit set with mobile staircases that reconfigure to create a dozen different environs.

Gail Baldoni supervised the period costuming — from the high button shoes to flower-bedecked hat, spats to silk top hats. Although they are a mixture of in-house designs, donations from a patron’s closet and items pulled from a costume supplier, they reflect Baldoni’s unified fantasy vision of the Gay ‘90s.

If you have to hunt for a weakness, the Maltz might have sprung for another couple of singer/dancers and a couple more pieces of brass to put just a shade more oomph to the production numbers.  But that’s the reality of economics.

Our advice is to give yourself over to the irresistible force that is Vicki Lewis, Marcia Milgrom Dodge and the entire company of the Maltz’s freshly-minted Hello, Dolly!