Posted on December 2, 2011 by Bill Hirschman 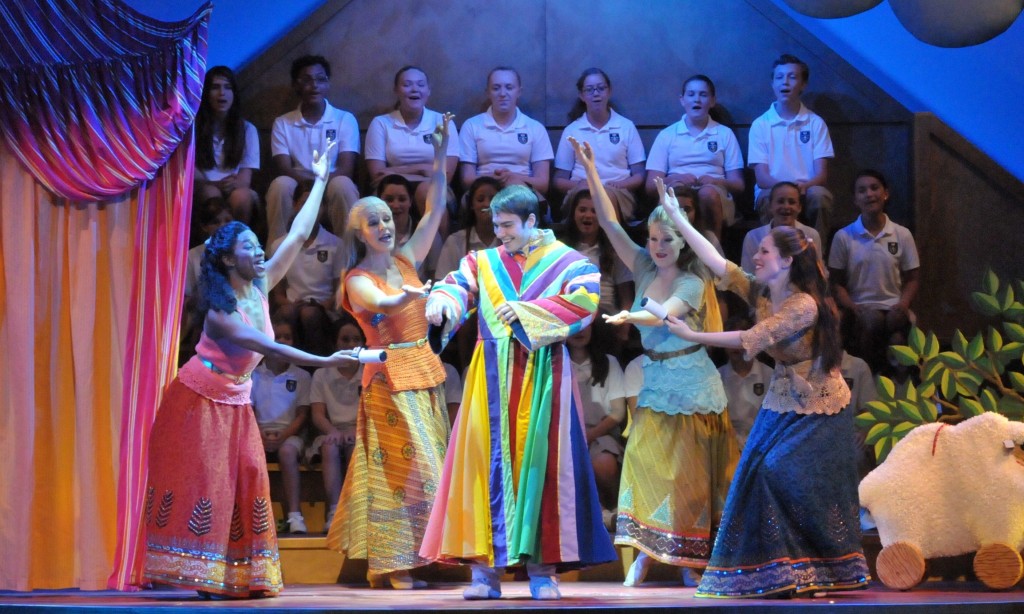 The Maltz Jupiter Theatre’s almost profligately lush, unflaggingly energetic and totally  winning edition of Joseph and the Amazing Technicolor Dreamcoat will thankfully make you forget any of the dozen high school, church or amateur productions that may be polluting your memory.

By investing an embarrassment of talent, elbow grease, skill and dollars, the Maltz has elevated Andrew Lloyd Webber and Tim Rice’s slight children’s vaudeville into a thoroughly entertaining evening for all audiences.

With 18 adult triple-threat performers, a solid seven-piece band, a kaleidoscope of  costumes, lights, sounds and sets, an overworked smoke machine, plus a pre-teen choir of nearly 30 students in the background, the Maltz has pulled out all the stops and starts and stalls.

To be fair, a lot of people don’t like the show to begin with; they rebel at the whimsy as being just a little too twee. But it is what it is and the Maltz has made the most of what it is.

Very loosely based on the Bible story, Webber and Rice’s first professionally produced musical is an irreverent pastiche of styles in a cantata built on Rice’s wry lyrics that rhyme pajamas and farmers, and Lloyd Webber’s score, which is more insidiously infectious than “It’s A Small World After All.”

I still I haven’t a clue what the moral is, despite seeing several productions and singing along to the cast album in the car for decades. The big message number “Any Dream Will Do” is no help whatsoever. But in a show where prisoners tell the imprisoned hero, “Don’t give up, Joseph / Fight ‘til you drop / We’ve read the book / And you come out on top,” then you have to suspect the theme is just that theater can be silly, stupid fun.

Director Mark Martino (who headed the Maltz’s sublime Crazy For You) highlights the goofball sensibility such as positing Pharaoh as Elvis leading his wives in a Hound Dog number as if it was presented in a hieroglyphic. The hip-swiveling swaggerer Ryan Williams tosses in asides to the audience like “It’s good to be the king.”

While Martino keeps the show moving, he layers in little moments such as a hungry brother ending a big solo with outstretched arm, then spotting an invisible fly buzzing about, snatching it with his upraised hand and popping it into his mouth.

But Martino’s choreographic skills light up the place like premiere night searchlights every time he stages a dance break. For instance, one of the show’s lamest numbers, a country-western spoof  “One More Angel in Heaven,” becomes a show-stopping square dance hoedown. It helps that Martino  has a corps of joyful indefatigable dancers who could power Jupiter for a week if you put them on a treadmill.

Joseph is hardly a foolproof piece. The Golden Apple Theater’s wildly popular production in Sarasota in 2009 was one of the 20 worst evenings of professional theater I can recall. I remember shuddering to discover that the curtain call was a 15-minute disco recap of every song.

But the Maltz under Artistic Director Andrew Kato has earned a reputation for delivering unassailably solid productions of mainstream musicals. Yes, a few stumble and several are triumphs of style over substance and emotion, but the Maltz has become as reliable a brand for quality as you can ask for.

The individual elements melded by Martino and Kato are, as usual, impressive. Start with the casting of Florida and New York talent who exude a contagious glee.

John Pinto Jr. as the handsome and often shirtless hero has the storybook charisma and vitality to instantly win over the audience with a grin that frequently seems downright genuine. The surprise is the expressiveness in his mellow tenor when he sings the mournful “Close Every Door.” No winking at the material here.

Jodie Langel (Evita at the Maltz in 2009) is genial company as the E-Ticket Tour Guide with a clarion soprano. Langel displays a confident comfort with the role having played the narrator three times before. Side note: Langel is a Broadway veteran who recently moved to South Florida with her husband, this show’s hard-working musical director Kim Douglas Steiner. That positioned her to accept the lead role of Diana in Actors Playhouse’s production of Next to Normal next month. Heck, the Playhouse is doing its own Joseph right after that. Maybe they can keep her.

Local stalwart Jeffrey Bruce brings a daffy elan to his roles as Jacob, Potiphar and assorted other worthies.

Credit the members of the band of brothers with standout numbers: dance captain Dennis O’Bannion leading the chorus in the country number, Ben Liebert as the fly-eating leader of the French café lament “Those Canaan Days” and Randy Aaron leading the conga line in “Benjamin Calypso.”

The children’s choir was a nice touch that is dropped from more modest productions. In this case, one of eight different choirs of about 28 kids performs at one show each week. Truthfully, the opening night group was adorable, perfectly competent and help set the tone of the show as a children’s story being told by Langel to a class. But they are used so infrequently and sparingly that they really are window dressing rather than an essential element. Still, someone should have thought to allow them a bow at the curtain call.

On the production side, set designer Dan Kuchar and lighting designer Paul Black collaborated on a relatively simple set, but framed it with three Egyptian arches concealing a rainbow of LED lights that echoed in sync with the coat of many colors lyrics: “red and yellow and green and brown” etc. Black’s ever-changing snap lighting must have kept production stage manager James Danford busier than a finalist in an Xbox tournament.

Once again, the Maltz displays its attention to detail, from the sound of Jacob’s bleating sheep as the audience leaves to the throwaway prop for an Egyptian businessman counting his wealth on a golden abacus shaped like a pyramid.

Special mention is due to costumer Jose M. Rivera whose designs are as whimsical, wry and inventive as any element of the show. He has lavished spangles, tassels and feathers on a massive number of glittering tunics and headdresses mashed together from a dozen cheesy Biblical epics. Without a moment’s creative hesitation, he clad the brothers in western garb for the hoedown number and Swinging ’60s’ outfits (one echoing Austin Powers) for a rock number. He, too, has an attention for detail, down to a blue jewel in Pharaoh’s belly button.

In total, fight it all you want. You’re going to find yourself humming the damn score on the way home.

One more side note:  In re-listening to the Broadway cast album this week, I was once again enchanted by the voice of Laurie Beechman, the diminutive actress who played the narrator with a voice that crossed Ethel Merman’s Broadway belt with Barbara Cook’s interpretive skill. This led to a procrastinating meander through YouTube videos of her television performances hawking her solo albums prior to her death from ovarian cancer in 1998. Point is, I ran across her rendition of  “On A Clear Day You Can See Forever” that genuinely makes you tear up at her incredible skill, exuberance, joie de vivre and the knowledge that she was fighting cancer. You really have to look at it: http://www.youtube.com/watch?v=XhuxA_lHDd4

To see a feature on the use of 240 children in the choir, click here.

To see a promotional video of interviews and rehearsals, click here.\\ 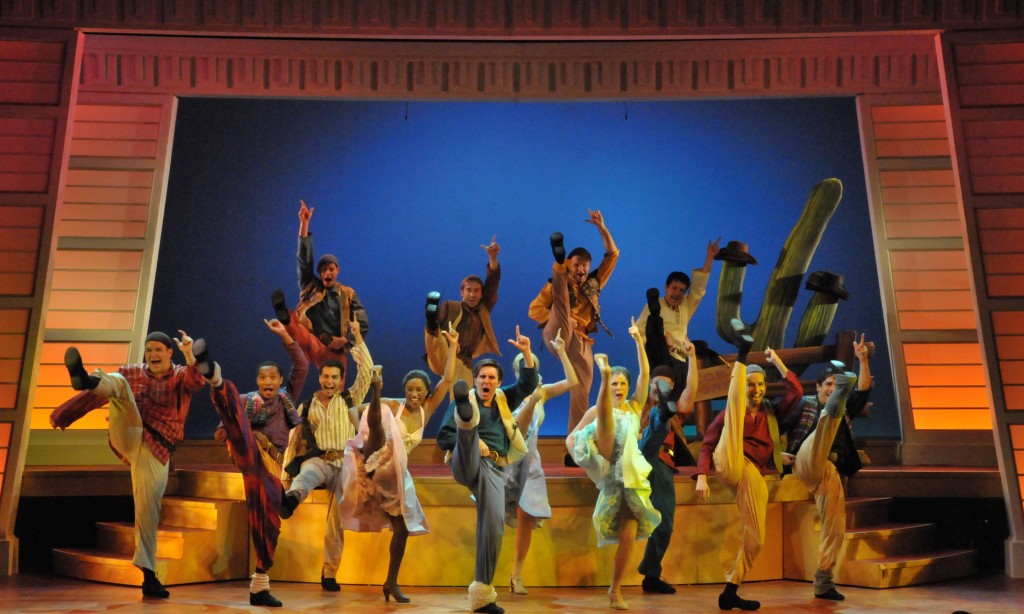 A country-western hoedown in the middle of a Bible story. Go figure. / Photo courtesy of Maltz Jupiter Theatre

2 Responses to Maltz’s Joseph is Lavish, Energetic and Winning