Margot Moreland & Oscar Cheda Are Playing Your Song In Boca 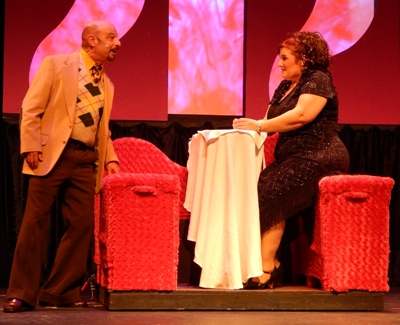 You know what’s not fair? Speaking from a selfish audience point of view, it’s not fair that Margot Moreland and Oscar Cheda don’t get cast often enough on South Florida stages. We deserve more.

Their presence in Boca Raton Theatre Guild’s production of They’re Playing Our Song is, indeed, more than enough reason to see this tuneful but far from iconic 1978 musical by Neil Simon, Marvin Hamlisch and Carole Bayer-Sager.

Just watching these actors joyfully singing the title song – portraying a composer and lyricist recognizing their big hits playing on a restaurant’s loudspeaker – is the kind of entertainment that gives you a vicarious buzz. Cheda’s eyes pinch into a delighted squint and Moreland simply glows in a number that is infectious.

The plot, inspired by Hamlisch and Bayer-Sager’s own romance, is set in the groovy ’70s as disco was laying claim to pop music. Established composer Vernon Gersch is an acerbic and aloof 40-something who needs a new lyricist. Into his apartment/studio careens the quirky up-and-coming Sonia Walsk seeking a match up with the composer whose skill she worships. This is Neil Simon, so this mismatched odd couple of neurotics seems doomed, yet are obviously fated to end up together. He’s punctual and punctilious; she’s habitually late and disorganized. He can’t maintain a relationship (three engagements in one year) and she can’t break off the crippling co-dependant one she has been in for years,

Of course, as they work together, romance blossoms but not without several rough patches, especially as they try to reconcile merging a work life and private life. In a scene in which they seem likely to break up for good, there is an immense amount of relationship babble that sounds like it came from a self-help book entitled, I Am Me, And You Are You, And We Are We, But We Are Not Each Other.  I just made that up,

But Simon knows how to bring together such disparate creatures with endearing quips like: “I’m a flake, you’re a flake, and two flakes are the beginning of a snowstorm.”

They’re Playing Our Song is a late entry in the category of old time musicals, a frothy frippery with a bit of heart and a lot of polish skillfully applied by experienced professionals. Other than the title tune, few people remember any of the score ten minutes after the curtain falls, other than a fond recollection of a procession of solid numbers wrought by talented tunesmiths.

What is essential with these shows, more than most, is that the lead actors must be engaging, winning people the audience can fall in love with. Fortunately, director Keith Garsson has wisely hired Moreland and Cheda.

Neither looks a thing like the traditional Broadway musical star, let alone Brangelina. But because they resemble your next door neighbor, the audience happily climbs aboard their emotional rollercoaster. Both have the precise comic timing and topspin to deliver Simon’s classic urban banter, which requires taking a pause at precisely the right moment, such as Moreland saying, “I bought this ring to celebrate not committing suicide for turning 40.”

Add in their clear, strong voices. Cheda has a full expressive sound that delivers these songs far better than the original actor on Broadway, Robert Klein. He has a slightly woebegone look that served him well in his Carbonell-winning performance as the nebbishy protagonist in GableStage’s The Adding Machine. But his Vernon does not exude a shred of being a victim or loser, just the host for a goodly dose of neuroses.

Moreland is blessed with both a powerhouse voice and an innate likability that charms anyone watching. Many will remember her from her frequent stands as the hairdresser in various productions of Shear Madness. But those with a good memory recall her dynamite turn as Mama Rose in the Fort Lauderdale Players’ Gypsy in the mid 1990s – a role we’d pay double to see her repeat.

Each character has a three-person Greek chorus behind them, ostensibly the voices in their head that they consult when they are creating. But really they exist so that a corps of singer/dancers can fill out the volume of the show and provide a vehicle for Ron Hutchins’ disco-inspired choreography. The energetic and beaming spirits are David Berry, Lindsey Johr, Jamie Leigh, Chelsea Lee, George Macia and Mica Scroggins.

Caryl Fantel once again serves as musical director, pianist and conductor of a band that include Karen Nagy on synthesizer, Martha Spangler on bass and Roy Fantel or Destin Johnson on drums.

Look, this is just cotton candy, but Moreland and Cheda make it awfully tasty.