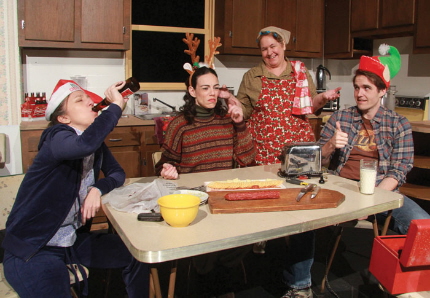 As holiday plays go, original offerings are a) the tried and true traditionals, a la A Christmas Carol and It’s A Wonderful Life b) new plays that try too hard, Santaland Diaries or c) something truly original. Something truly original is usually not the norm. But at Actor’s Playhouse at the Miracle Theatre, a miracle of holiday comedy has emerged. Tom Dudzick’s Miracle on South Division Street has all the makings to become a perennial holiday comedy favorite and the production that’s been put together in the cozy balcony theater at the Playhouse boosts its appeal even further.

Growing up in any number of northeast U.S. towns, you’re bound to have memories of a family like the Nowaks, the Polish-American clan at the center of Miracle who just happen to inhabit Buffalo, yet could live in any working class neighborhood.

Clara Nowak (Elizabeth Dimon) is the matriarch — ordinary, perhaps, but she and her three grown children, Jimmy (Clay Cartland), Ruth (Deborah L. Sherman) and Beverly (Jeni Hacker) have been “blessed” with a gift left to them by Clara’s father.

They are keepers of a 20-foot-tall shrine, a sculpture commissioned by her Polish refugee dad during World War II. The owner of a barber shop claimed he saw a vision of the Virgin and had the statue built and shipped. It sits just outside the Nowak family’s house and for six decades it has attracted attention from people who leave messages and coins.

The “miracle” defines the Nowaks. Clara spends her days cooking a miracle soup “created on holy ground” that has been known to cure even the most stubborn foot fungus; Jimmy and Ruth are charged with giving speeches about the story of the sighting to passersby, and Beverly — well, it’s given her an identity around town with her bowling league and with boyfriends.

Dudzick based the story on a Blessed Mother shrine that stood a block and a half from the playwright’s father’s tavern — on Buffalo’s East Side, once bustling but now just depressed. The neighborhood barber did build a shrine after seeing a vision, but the Nowak family story in Dudzick’s play is a work of fiction. He himself had a vision one day while standing before the shrine.”There’s a story here,” he says. “The real life details of its origin were forever buried with the barber, so I needed to invent a family.”

And invent he did.

The slice-of-life takes place on Christmas Eve. Jimmy is keeping safe an engagement ring in his jean pants pocket. He’s going to propose to his new girlfriend, a Jewish girl (heaven, forbid!) from the other side of the tracks. Clara has just returned from the attic where she’s fetched a letter she wrote at 10 years old pleading with the Pope to give her father’s shrine credibility. It never happened. And sister, Ruth, has called a family meeting. She’s a wannabe actress who, we find out later, has had a Come to Jesus moment about the shrine and wants to share it with the family.

Beverly shows up for the meeting but wants to make it quick as she has practice for her big Christmas bowling tourney as part of the Kowalski Kielbasa team. But what Ruth has decided to divulge sets the family’s legacy reeling and turns the tradition of the shrine on its keester (or dupka, as Clara would say).

The ensemble cast at Actors’ Playhouse warms up to each other right out of the gate. Cartland’s relationship to Dimon as the good son, puttering and fixing her old toaster and vacuum cleaner; Clara’s (Dimon) relationship to her daughters – the out-of-the-box thinker Ruth (Sherman) and older daughter Bev (Hacker) all ring so true.

Then there’s the sibling rivalry among the three with Hacker giving Cartland some pretty realistic knuckle punches – a small nuance that really gives the relationships true grit.

Dimon always seems to manage to pull something fresh and new out for every character she plays, even when they possess many of the same essences. With Clara, she’s given her character a headstrong temperament – one of the last holdouts of the neighborhood who believes her family will never play “free and loose with rules.”

Sherman has the most difficult role as the play’s chief protagonist – not only charged with delivering news that will change the family’s life, but also revealing Ruth’s struggles with her own identity crisis. Sherman finds a way to convey both of these emotional struggles.

Hacker as Bev is the most comical with a natural timing that makes you follow her every move, even if the focus isn’t on her. She balances a fine line between upstaging other characters when the moment isn’t hers and adding another dimension to the goings on around her.

And Cartland has to manage being brother and son, essentially having to interact with all three of the women and showing different relationships with all. Through his character, each of the female characters shows a side of themselves not seen by the others.

Dudzick’s play has faced criticism for its All in the Family-esque bigotry but in this production the characters are presented with such authenticity that it comes off as “this is who we are,” with characters that are so vibrantly real, it’s difficult not to relate to them. Had they been more broad-brushed and cartoonish, it would be easy to judge them instead of the empathy that Dudzick imbues. And what tips it in their favor is the smart comedy in this bird’s eye view of belief. “It’s not supposed to make sense, it’s religion,” one of the characters so smartly conveys.

David Arisco’s direction ties it all up in a nice gift box, puts a bow on it and wraps it up just right. There’s no questioning the history of these family ties. In a purely production value sense, every corner of the set is used, yet no character ever seems disengaged from another, which is so crucial in this ensemble comedy. Dudzick, however, does present a directorial challenge with an intermission that seems to come out of the blue and unnecessarily break up the action — it’s an odd split as no set is changed, no props moved, etc.; the lights go up on the actors basically in the same place we left them.

Clara Nowak’s kitchen set by Tim Bennett becomes yet another character in the show with its knickknacks, dated wallpaper and cupboards, and Jello molds hung on the wall. It’s realism at its best. Costumes by Ellis Tillman reinforce the mood as does Eric Nelson’s warm lighting. Mitch Furman’s sound design is so wonderfully and perfectly kitschy (where did he find that Jewish themed Deck the Halls?)

There could have been more seats filled at the production I attended and hopefully as the run takes hold, more people will spend their holidays with the Nowaks. Ditch what’s in your annual theater calendar; Miracle on South Division Street is a vision.

Miracle on South Division Street through Dec. 28 at the Actors’ Playhouse at the Miracle Theatre, 280 Miracle Mile, Coral Gables. Performances 8 p.m. Wednesday-Saturday, 3 p.m. Sunday. Running time 1 hour and 30 minutes with 15 minute intermission. Tickets for weeknights and matinees are $45, and on Friday and Saturday evenings $53. The theater offers a 10 percent senior discount rate the day of performance and $15 student rush tickets 15 minutes prior to curtain with identification. Visit actorsplayhouse.org or call (305) 441-4181.